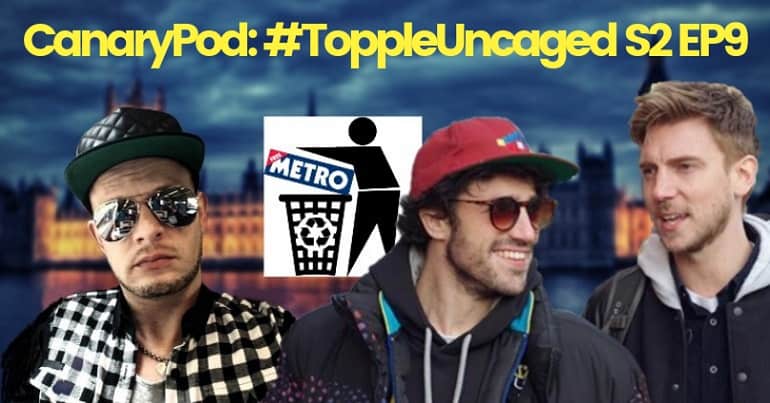 This week’s guests? Disability rights activist Paula Peters talking about the #DumpMetroDWPLies campaign and Ross from the UK’s hottest rap duo Too Many T’s.

Chicken coup 4.0 is underway people. We knew they’d have one last go before a general election. Last chance to keep the left out of govt. We’ve been here before.
Some people are going to crumble like month-old cheese. Rise above it. Eyes on the prize.

Labour MPs attacking The Canary – an independently regulated, trust-stamped news org – on behalf of a racist MSM & people who back a racist regime in Israel. While calling us & our readers the racists.
You couldn’t make it up.
Good job we work for the people, not them. Onward.

The major benefit of burning bridges with the MSM. You can be true to your principles at all times and never risk losing a gig for it. Haven’t regretted it for a day 😂❤️

Check out the hashtag #DumpMetroDWPLies.

YOU tell ME YOUR views on the biggest stories 😤#BorisBus #PhilipAlston? #Lionesses?
REPLY TO THIS TWEET & I'LL READ THE BEST OUT ON SUNDAY ⬇️ RT PLS! pic.twitter.com/b5KaIcxZc7

"What appears on the surface like a fairly bland report, filled with numbers and percentages, sheds light on the scale of devastation being inflicted on people across the country." pic.twitter.com/5kxAznfSdp

Boris Next Door by Too Many T’s:

Find out more about Too Many T’s and follow them on Insta.

Charmless Man by Blur via Malefoi

Common People by Pulp via ILoveHorses335