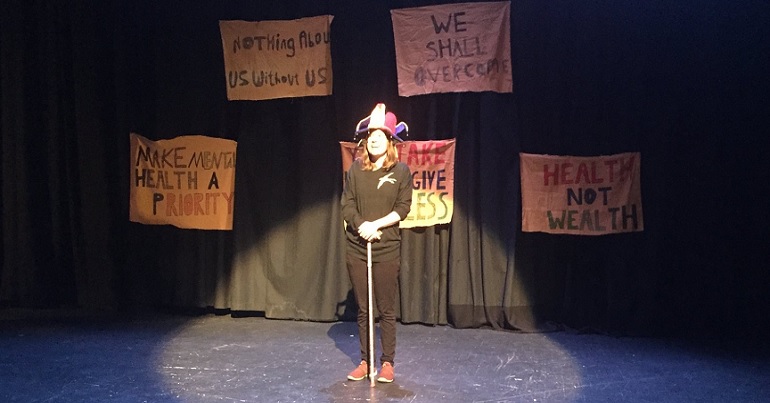 The real life stories of disabled people’s experiences of the UK welfare system are being brought to life in a play. But far from being a fringe performance, the cast is taking it to the heart of political decision making – parliament.

Ignite Me Workshop Theatre was formed in August 2017. And now, it’s bringing its latest work, a play called Lives Like These to parliament on 1 May. The Canary caught up with the group’s artistic director, Bryony Jayne Meteyard, to discuss igniting parliament with some hard-hitting theatre.

The group came about, Meteyard said, because she saw the need for a “people’s theatre” in south west London. The aim of Ignite Me is, in her words, to “hold up a mirror to society and show the truth”. Disabled people in the UK are often portrayed in the press as ‘benefit scroungers’, or ‘living off people’s taxes’, so a theatre company dedicated to busting these myths is refreshing. Meteyard told The Canary:

Disabled people and full-time carers need to have a voice in the current political climate. Austerity is having a major detrimental effect on their lives and bullying, discrimination and marginalisation are still massive issues. Theatre is one way to make an impact.

Meteyard is correct when she says that disabled people’s lives have been detrimentally affected in recent years. They have been subjected to seven years of what TV show The Last Leg described as a “genocide” by the Conservative Party. Because since 2010, the Tories have cut:

The UN Committee on the Rights of Persons with Disabilities (UNCRPD) has also reported twice since November 2016 on life for disabled people in the UK. The Canary covered each of the reports in full. But overall the UN said successive Conservative-led governments had committed “grave” and “systematic” violations of disabled people’s human rights.

The chair of the UNCRPD said that the government and the media “have some responsibility” for society seeing disabled people as “parasites, living on social benefits… and [living on] the taxes of other people”. She said these “very, very dangerous” attitudes could “lead to violence… and if not, to killings and euthanasia”. And she urged the government to “stop” this.

It is exactly this kind of damage that Ignite Me is trying to publicly portray. Working with Ruils, a local user-led charity based in Teddington that works with disabled children and adults, the group met the potential cast for Lives Like These. Meteyard said:

We knew disabled people would have powerful stories that need to be heard. And it was through Ruils that we met the cast. We didn’t know what the play would be about, we needed to hear from everyone first. And then hear from them again. And again. Hearing one another’s experiences told and retold, we connected with one another and with the true stories that became the interwoven narrative of the play. With Lives Like These, we wanted to devise, in the words of Augusto Boal, a ‘living documentary’.

In the play, the cast of real people (not actors) reveal their experiences of disability. For example, the life of a single mother of two chronically ill children dealing with social services. Then there’s a woman with a disability shut out by her family. These are among the stories told by people playing themselves in Lives Like These.

Meteyard strongly believes that productions such as Lives Like These, and theatre more broadly, can be a force for social and political change. She says that change will hopefully happen through the cast “revealing their experiences which are current and specific to them but at the same time they are presenting issues that resonate in society”. Meteyard says the aim is “surreptitious insurrection, for the spectators to see society as it really is. She explained:

Theatre is an important tool for social change because of its immediacy. We made Lives Like These in less than 12 weeks (we had one two-hour rehearsal per week) and put it on stage. From having something important to say to actually voicing it, or showing it, to an audience in a way that has artistic merit, that’s a quick process.

But she wants to go further, hence the performance to politicians, the press and the public in parliament:

We will use theatre to open up a dialogue with the government. Previous performances have been attended by councillors. And, for example, Hounslow Council has launched a high-risk inquiry due to one councillor’s concern about a member of the cast’s experience. The way theatre can cause social change is by creating a forum for debate and changing perspectives at a grassroots level. We are playing out real life to mobilise people to take action in the case of another actor. Action against discrimination and bullying.

Lives and art in flux

What makes Lives Like These so powerful is that the audience has the prior knowledge that what they’re witnessing is not a work of fiction. It’s not been created by a privileged, middle class playwright. It’s about real people and their real lives. Meteyard believes that often real life stories in theatre have more impact than fiction:

I think theatre that makes you ask questions is the most powerful. True stories make it possible for audience members to intervene in the action. We do ‘forum theatre’ after the play is performed where we revisit scenes and audience members can participate in the action on stage. The situations are current and constantly in flux which enables the audience member to make the change they want to see… In a fictitious play, all the conclusions have already been decided. There is already an ending. You can’t go back and stop Hamlet from killing Polonius, which eventually leads to his death from Laertes’ revenge. Nor would we care to.

Lives Like These looks set to be a powerful piece of theatre. All too often, disabled people only get to tell their stories through social media, or a select few (if they’re lucky) through a Guardian columnist looking for a subject for their weekly opinion piece. Whereas Ignite Me is putting disabled people and their stories in sharp focus.

Meteyard hopes the audience will:

See things from the perspective of the cast members, put themselves in their shoes. We hope they will see people with disabilities as people and make a stand when they see some wrongdoing. We want to see changes happen in social services and we have invited representatives. This has been an empowering process for us but it is not over yet. We want to influence more audiences and, importantly, decision-makers at the top, in government.

With the human rights abuses, erosion of civil liberties, financial torture and eugenicist-like attacks disabled people have lived through in this decade, Ignite Me’s Lives Like These is an important step in beginning to redress the balance of power.

Featured image via Ignite Me