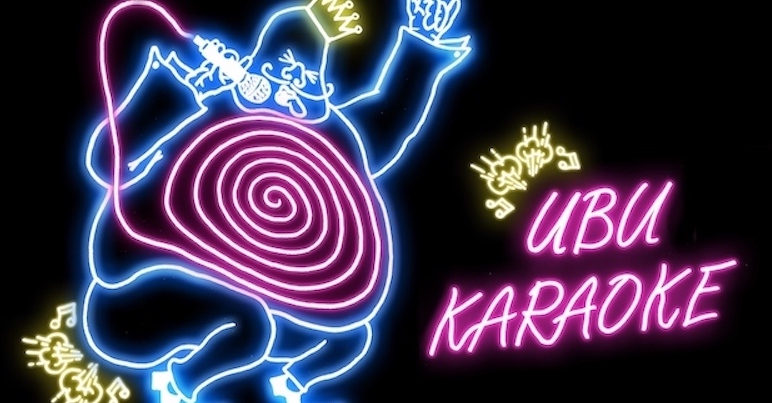 Politics and karaoke isn’t the most obvious combination. But in a new play called Ubu Karaoke!, these elements come together in the most spectacular way.

Ubu! is the latest show from Cornwall-based Kneehigh – one of the UK’s most exciting touring theatre companies. In its own words, it plays with a “spontaneous sense of risk and adventure” to produce “extraordinary dramatic results”. In Ubu! this shines through – the audience sings at the top of their voices and play a fully active role in bringing down a dictator whose behaviour is uncomfortably familiar to us all.

Ubu! is based on Alfred Jarry’s play Ubu Roi, which premiered in 1896, allegedly causing a riot. Chaos and pandemonium broke out and, after just one performance, it closed. Jarry’s play featured an evil dictator, “spurred onwards to apocalyptic idiocy” by his clever and ambitious wife, Ma Ubu.

In the 2018 version, Ubu (Katy Owen) and his wife (Mike Shepherd) arrive in Lovelyville just after President Nick Dallas (Dom Koyote) has been elected. All is lovely in Lovelyville, but the Ubu’s work fast to shatter this. They entrap Captain Shittabrique (Robi Luckay) to assassinate Dallas and lock his daughter Bobbi (Kyla Goodey) in the zoo.

With Lovelyville under control, they begin to decimate all that was good. Things go from bad to worse, culminating in a potentially apocalyptic war…

But the plot isn’t the only thing unique and spectacular about the show. Singing a mix of iconic pop, kitsch and punk karaoke to caption screens around the venue, the audience comes together to enact revolution. There’s real power in this because the story touches a raw nerve in today’s political climate.

Driven by brilliant choreography and an abundance of slapstick and pantomime elements, the story that unfolds is uncomfortably real. As the show’s programme states:

Any similarities between the characters portrayed in the show and the current government and/or other political administrations around the world is purely intentional.

It’s incredibly timely. I can’t believe the decline in things and the rise of the far right etc… I thought it wasn’t going to be as immediate as it is. It just feels really important. Sure theatre must entertain. But as Shakespeare would say it must also reflect the times that we’re in.

And it feels so important at the moment, we should at least be commenting on it, and I think that it’s timely for now. I do hope that if we were to try to do Ubu! in three years’ time everything’s passed. But I’m afraid ‘no’ – I don’t think we’re going to get rid of this far-right mentality in a hurry.

Plays like Ubu! play a valuable role in uniting the audience against the onslaught of far-right politics. And that’s powerful.

Shepherd explained that it was writer Carl Grose’s idea to adapt Jarry’s “outrageous” play for a new audience. But he also said the launch in Cornwall is significant:

After Cornwall voted UKIP a few years ago and then Brexit, I thought one of the things we’ve got to do, but not in a heavy political way… we’ve got to challenge that mentality a bit with our work. Because that’s what Jarry was doing at the time, he was challenging politics, the way decisions are made and society generally.

“Shake it all up”

Shepherd told The Canary that Ubu! was a deliberate attempt to push beyond traditional theatre venues, audiences, and methods.

After Kneehigh’s work at the Globe Theatre, he recognised the impact of audiences standing close to the stage, rather than in numbered seats. He wanted to bring the immediacy of this to Ubu! using promenade theatre – a device that blurs the boundaries between performers and spectators. As Shepherd said: “I wanted to shake it all up again”.

Bobbi’s held captive in a zoo of inflatable animals, the barman (Tom Jackson-Greaves) stops selling beer to dance spectacularly, and the audience ‘go’ to war with ping-pong balls – this show really does shake it up.

Kneehigh has a unique venue called The Asylum. A geodesic dome based in the stunning Lost Gardens of Heligan, it is the perfect venue for this style of theatre.

Collaboration between Shepherd, Grose, and music director Charles Hazlewood led the way to karaoke. Hazlewood is the world-famous composer behind many innovative, collaborative and community orchestra initiatives, including the British Paraorchestra.

After Shepherd saw Massaoke in Edinburgh, they came up with the idea to push the boundaries of what is essentially a political play:

The three of us said why don’t we combine Jarry’s Ubu, keep it really [visually] simple and tell that story through iconic songs.

I genuinely believe that if all parliaments had to sing together in harmony before commencing the days business, we’d have more flow, more consonance in our world.

I can but dream.

Ubu! is participatory theatre at it’s best because it pushes boundaries in a vivid, poignant, and powerful way.

The audience may sing and laugh throughout, but a political undercurrent is ever present. Ubu’s incomprehensible list of new health service measures is alarmingly familiar. Taxing enjoyment really doesn’t seem too far away, not least amid huge cuts to arts funding. The crowd roars as Ubu flushes everyone from Theresa May, Donald Trump, Nigel Farage, and Piers Morgan ‘down the bog’ – but there’s genuine passion and anger to the cheers. And that mixes perfectly with the irreverent comedy that underpins the show – because laughing at the grotesque helps to banish its control.

In one haunting scene, the cast circle around Ubu wearing masks of dictators past and present. As this happens, the audience sings The Great Pretender – the words take on new significance. 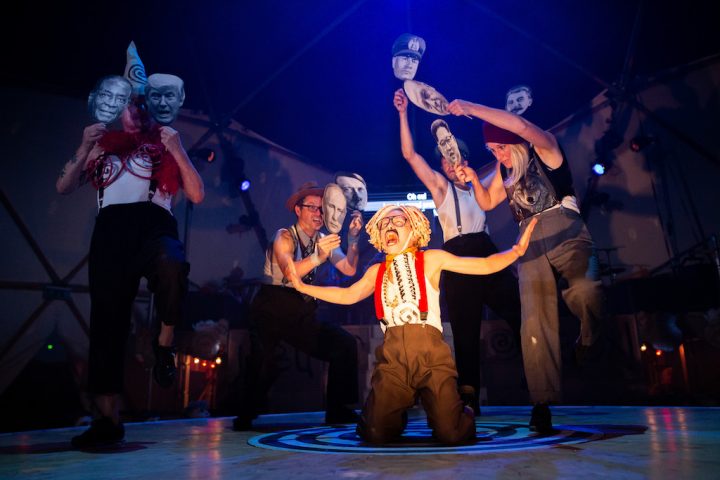 Ubu can obviously be seen as a figure of fun, a satire on authority, but he is also much more than that… He’s a reminder that those in power will do their damnedest to make their reality our normality… let us collectively remember that there is NOTHING normal about Trump – I mean Ubu.

Reap what you sow

As the show draws to a close the crowd sings Lou Reed’s Perfect Day. The line “You’re going to reap just what you sow” gets stuck, looping over and over again. It’s a powerful moment, and ultimately this takes the play to its amazingly positive conclusion – carried by the entire cast and audience.

The message that emerges from Ubu! is that through community, by coming together and singing together, and through collective unity, we are a powerful force to counter these dark days.

Join the karaoke revolution and see this show if you can.

Ubu Karaoke! is on at the Asylum until 25 August.

All images via Kneehigh (with permission).