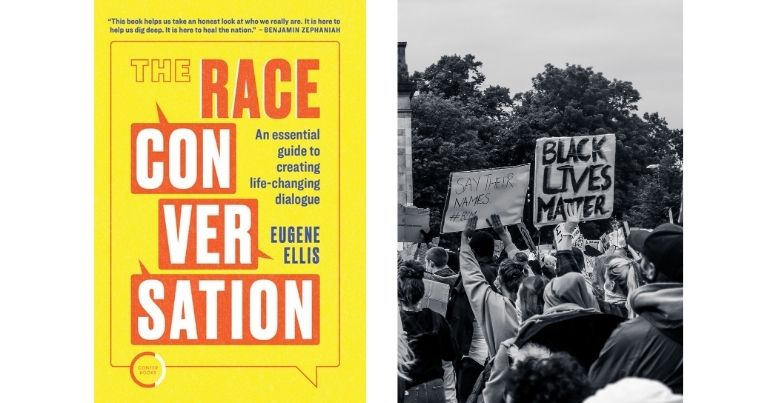 Confer Books publishes material that’s “designed to deepen our understanding of psychological, relational and emotional processes”. And on 4 March, it released a new title named, The Race Conversation: An essential guide to creating life-changing dialogue.

This fascinating read dives into a world of new vocabulary coined to initiate conversations around race. And it seeks to discuss “the race construct” which keeps “the discomfort of race oppression out of white people’s minds and bodies”.

Author Eugene Ellis is the director and founder of the Black, African and Asian Therapy Network (BAATN). It’s the UK’s largest independent organisation of its kind. Trained as a psychotherapist, Ellis focuses on “body-orientated therapies” such as body awareness, mindfulness, and healing. Narratives in the book explore “race and mental wellbeing” through an alternative non-verbal lens which doesn’t always involve speaking.

Since George Floyd’s killing, people with mixed families have been pressured to have [race] conversations they might not necessarily have had as a family before. A lot of people feel an ethical pull towards dismantling racism in their workplaces or institutions.

Just last week, the reaction to Oprah Winfrey’s interview with Meghan Markle showed how rife racism is in Britain.

Opening the discussion with everyday racism, Ellis shows how today’s political and social climate has forced race conversations to the forefront. Whether we like it not, topics of race have become unavoidable as the media has suddenly taken an interest in pursuing race-related coverage.

Talking about race had always been hard work, but, after George Floyd’s killing, it had somehow become hard work not to.

Black Lives Matter protests took place across the world in the wake of George Floyd’s death at the hands of Derek Chauvin, a Minneapolis police officer. Millions gathered to protest for justice, with 15-26 million people in the US alone according to the New York Times.

For many People of Colour (POC), the global shift to support anti-racism has been a confusing time of feeling both liberated and overwhelmed. Ellis wrote:

I went through a phase of dislocation and mourning, even paranoia as these narratives played out on the world stage

Examining the impacts of racism, the book talks about how trauma can occur “on a mental and physical level due to just existing in a racialised society”.

Mindfulness is a technique that involves a “body-mind” connection. Ellis said it can be used as a way to “almost retune your body” to lessen the fear that arises when speaking in race conversations.

And in this race conversation, he wants to include everyone’s experiences. He wrote:

I also experienced first-hand that, even though white people embody conscious and unconscious race privileges, it doesn’t necessarily mean that they are free from pain and suffering.

White guilt and suffering from racism are often shunned, but Ellis said:

Another concept deployed in the book is how “the race construct” influences individuals to “attend to white people’s hurt and pain before the hurt and pain in people of colour”.

“It was whiteness on display”

It’s natural that frustration weaves its way into these conversations. In comparing ‘black rage’ and ‘white rage’, Ellis wrote:

White rage steps forward when people of colour step forward to take control of their lives and their financial circumstances. It is predictable, brutal and unforgiving.

People of colour understand that if they put their foot on the accelerator of their lives, they can only get so far before they run the risk of losing their reputation, their possessions or even their lives.

Today is the book launch. You can book up until 4pm, kick-off is 6:30pm and ending at 8pm. https://t.co/zAaVKY5g2X pic.twitter.com/VJVSnoUmWy

The recent increase in news outlets covering topics of race has put a spotlight on racism in the US. This has also sparked people in Britain to dig deeper into racism here.

The storming of the Capitol and the US elections… I was absolutely gripped by the whole thing. It was whiteness on display. It’s easy for us in the UK to say, ‘oh it’s not like that over here’. In the US racism is brash, big, bold and the UK is a little more subdued. There’s more of a conscious effort in the UK to keep it hidden.

Some institutions have put in place initiatives at certain times to speak about race. In the book, Ellis refers to the “dreaded race day”. He said:

For race or any oppression there should be conversations around that all the time. It shouldn’t be for one day; you need to reflect about it and that’s not enough time.

Mental health services have a responsibility to engage in race conversations

Mental health services that work with Black, Asian, Ethnic Minority and POC also have a responsibility to actively engage in race conversations.

An article written for the Guardian addresses the problem that Black and Ethnic Minority communities “are more likely to develop mental health conditions but less likely to access counselling – or find it fit for purpose”.

Ellis wrote about his thoughts on the problem which is “the internal discomfort of mental health professionals, and their profound feelings of not feeling safe during the race conversation”.

In the book he mentions that POC who then seek mental health services notice this discomfort. He said:

For a lot of people of colour, a big part of their mental health experiences are not necessarily [impacted by] their families but in society by political structures and systems of oppression. This needs to be included as a part of psychotherapy, training and counselling.

Then if their client wants to talk about race, they will feel that the therapist is available for it and most of the time, that’s not how it feels.

If creative language, thought-provoking theories, and an honest breakdown of how we can all participate in race conversations is what you’re after, then this is the read for you. Its forward-thinking narrative aims to normalise conversations about race, highlights the significance of historical oppression, and proposes different solutions to healing from race-related trauma.

“PAUSE … and breathe” is noted throughout the chapters and is a respectful reminder to all that taking a break from race conversations is ok; in fact it’s healthy.

Confer UK and Ellis are holding a live webinar specifically for psychotherapists to talk about “racial divides in our society” on 20 March, and they’ll be running another event in June as a part of their Summer Programme 2021.

You can find other publications from this author here.