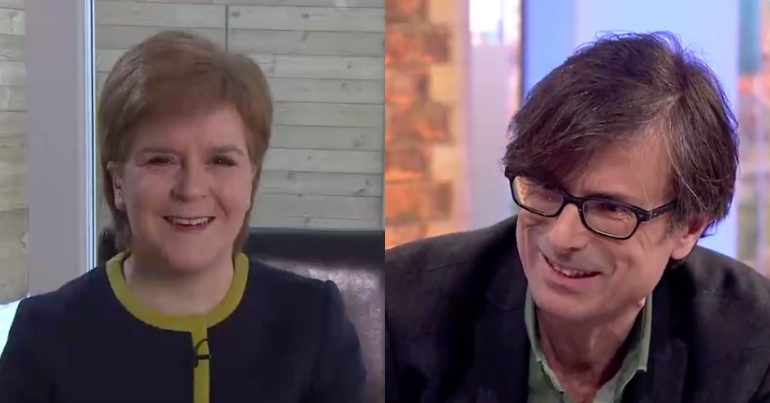 On March 4, Nicola Sturgeon appeared on ITV’s Peston on Sunday. The Scottish first minister was asked whether she thought a statue of Margaret Thatcher should be erected in Scotland. And her response was golden.

Sturgeon laughed when Peston suggested the idea and answered in just two words:

The SNP leader added that “progress” is more important than statues:

The legacy I want to see women leave is not so much in the form of statues but in the form of how much progress they make for the next generation of women coming behind us.

Guido: Pesto Asks Sturgeon If She’d Back Maggie Statue – “Steady on,” @NicolaSturgeon replies after @Peston asks whether she will back @joswinson‘s call for a statue of Margaret Thatcher. #Peston pic.twitter.com/HIoHqYCBdR — Peston on Sunday (@pestononsu… https://t.co/ebvGqHX7Um

Peston also questioned Sturgeon about Brexit. She criticised the “pick and mix” Brexit approach set out by Theresa May. Sturgeon added:

I don’t think it would be right for me as first minister or for anybody else to keep quiet when we think that the approach being followed was going to do significant damage to our economy, our society, reputation in the world – not just now but perhaps for generations to come.

Nicola Sturgeon – Theresa May is setting out a pick & mix approach that has been substantially rejected by the EU already. On the realism side of things Theresa May is effectively saying we're all going to be worse off at the end of this process#StopBrexit #FBPE #marr #Peston pic.twitter.com/CypBkprZ71

Sturgeon is currently topping a Sky News poll to decide on “Britain’s most influential woman”. Voting closes on 8 March on International Women’s Day. But at the time of writing, Sturgeon is leading with 20k votes. Thatcher meanwhile is in fifth place with 4.5k votes. And May is languishing with just 1k votes.

Whether statues of Thatcher are erected or not, there is no shortage of influential female figures fighting for, and crucially against, her political legacy today. And Sturgeon is certainly one of them.