The BBC just protected the Tories on Saudi Arabia. Viewers are outraged. 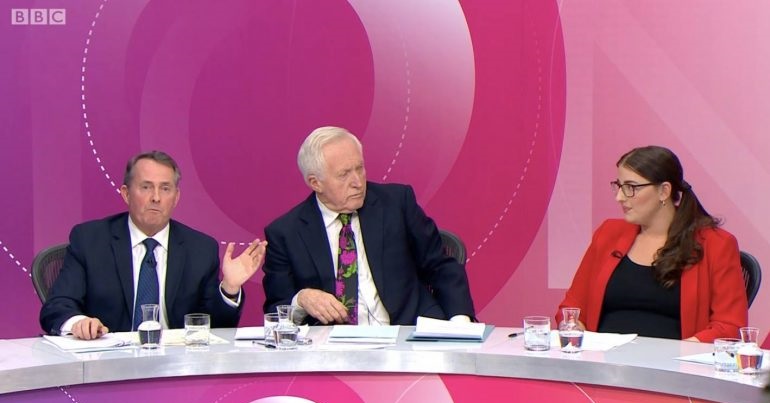 This week, Saudi Arabian crown prince Mohammed bin Salman enjoyed the red carpet treatment in London as a guest of the UK government. But a matter of miles away, the BBC protected the Tories from being questioned about it.

Question Time host David Dimbleby diverted a difficult question on Saudi Arabia aimed at international trade minister Liam Fox. As the panel discussed Russia, spoken word artist George the Poet questioned how Fox’s views on Vladimir Putin added up with his stance on Saudi Arabia. But before he had a chance to respond, the question was blocked.

Dimbleby told the panel they’d come back to it. But they never did.

We were in the audience tonight and we put forward questions regarding Grenfell, Homelessness, ID checks at polling booths and the Saudi's. All ignored! #bbcqt

Rolling out the red carpet

Since arriving on 7 March, bin Salman has met the prime minister and the Queen. The crown prince oversees the current Saudi campaign in Yemen, which has created one of the world’s worst humanitarian crises.

Hundreds of people protested the visit, which Jeremy Corbyn branded an “arms sales pitch”. And signs with messages such as ‘Hands off Yemen’ were held aloft outside Downing Street.

Bin Salman has overseen modest reforms in Saudi Arabia. Women will soon have bans on driving and attending sporting events overturned. But the regime is still one of the most oppressive in the world, jailing human rights campaigners and carrying out over one hundred executions last year.

The Saudis have been engaged in a UK propaganda campaign to counter the protests. Billboards and advertising spaces in London have been plastered with messages supporting bin Salman. Some of the material even ended up in The Guardian.

With such extreme measures being taken to sugarcoat Saudia Arabia, it’s incredible that the BBC also seemed so keen to stifle the debate.

The BBC: “defenders of the British establishment”

In a night where Labour’s Laura Pidcock won many plaudits, Dimbleby and the BBC came under fire.

Fox had just called Russia a “dark and dangerous regime” before George the Poet interjected:

And what about the Saudi Arabian regime? How would you describe that?

But Dimbleby instantly shot down the question. He told George the Poet that “may come” later, adding:

Let’s not go down that road.

Many people on Twitter soon vented their outrage that Dimbleby had seemingly protected the Tories.

This is why the visit of the Crown Prince of Saudi Arabia has not been spoken about tonight, & when it was, Dimbleby shut it down immediately… the BBC are defenders of the British establishment elite #BBCQT pic.twitter.com/cVR3OJ5OcU

It seems Question Time will remain under scrutiny for the foreseeable future. Be it councillors asking questions in the audience or Nigel Farage’s seemingly endless appearances, the show does not help itself. Thanks to platforms like Twitter, however, the BBC is at least being held to account.

– Join the protest against bin Salman’s visit if you are in London.