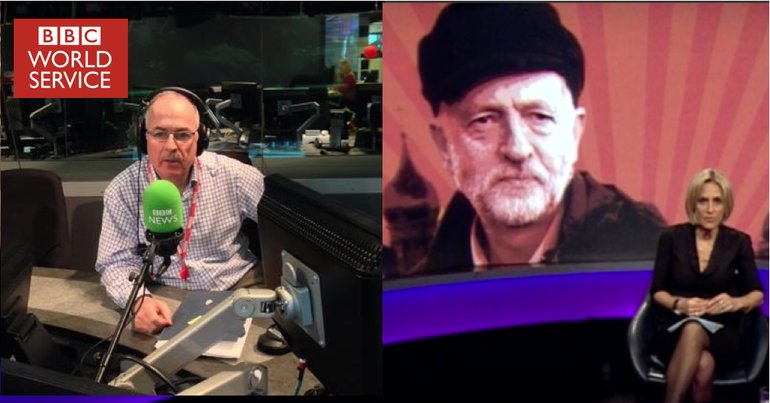 The BBC World Service transmits news and views from Britain across the world. But in a segment ‘educating’ overseas listeners on domestic politics, the service described Labour leader Jeremy Corbyn as ‘pro-Russian’.

The BBC has faced widespread condemnation for its treatment of Corbyn, particularly since the Salisbury poison attacks. BBC Newsnight even went so far as to portray the Labour leader with a red hue, against a Kremlin backdrop. The show once depicted Corbyn as a supporter of Donald Trump, despite the men being at opposite ends of the political spectrum.

People are rightly alarmed by BBC #newsnight this week. You should know that former Editor Ian Katz who started the photo shopped hats & was anti Corbyn for his time there, is now Director of Programmes on Channel 4. pic.twitter.com/aTW2E05aXL

But while Newsnight is a flagship political programme at home, the BBC World Service (English) reaches 75 million people around the world. During an episode of Weekend, BBC World Service UK political correspondent Rob Watson gave this explanation for criticism of Corbyn over the Salisbury poisonings:

To try and get this in some kind of context for people listening… Let me say something about post-Second World War politics of the European left.

After a short apology for “being a bit crude” in his approach, Watson continued that, since the Second World War:

The Western European left has essentially been divided. There are those who are sort of, basically, they were socialists but very pro-Western, pro-markets really, pro-American, pro-NATO.

And another part of the European left was not only left in its economic outlook, but was actually very anti-Western, anti-NATO, pro-Soviet Union. And Jeremy Corbyn is in that camp, in the latter camp, and essentially, what some members of his opposition… Labour Party are saying is ‘For goodness’ sake Jeremy, you’re in the wrong camp, mate!’

The #BBCbias against Jeremy Corbyn is escalating beyond belief. The BBC World Service UK politics reporter describes him as in the "pro Soviet Union" camp. YOUR licence fee money is paying for what according to the former BBC Chairman are "quite extraordinary attacks" on Corbyn. pic.twitter.com/CyqoKgzwbS

Watson doesn’t just oversimplify the issue here, he butchers it. His description of the UK left as pro-Soviet versus pro-West factions is simply not true.

The UK left is diverse. It includes a wide spectrum of ideas which (in broad strokes) challenge neoliberal capitalism, while promoting peace, cooperation, human rights and social liberalism. Russia hasn’t been a factor for much of the left since the 1980s, and is certainly not central to Corbynism.

The pro-market, pro-US, pro-NATO camp to which Watson refers is actually a tiny but vocal cluster of Labour-right MPs and centrist pundits. These groups might describe themselves as ‘centre-left’ or ‘moderates’, but actually occupy the political space of classic or neoliberalism. They are broadly pro-welfare state, and (on the whole) socially liberal. But they also tend to support the privatisation and marketisation of public assets and services. Those on the left argue these methods have negative, long-term impacts that undermine the welfare state and liberal values.

Centrists are often hawks when it comes to foreign military interventions (otherwise known as wars). Their catastrophic misadventures in Iraq, Afghanistan, Libya, and beyond did not temper these impulses. This can be demonstrated perfectly by one arch-centrist: David Aaronovitch. BBC and Guardian pundit Aaronovitch was a vocal supporter of the Iraq invasion, but was unnerved when weapons of mass destruction (WMDs) failed to materialise in the aftermath. In April 2003, he wrote a column entitled “Those weapons had better be there…”, in which he stated:

If nothing is eventually found, I – as a supporter of the war – will never believe another thing that I am told by our government, or that of the US ever again. And, more to the point, neither will anyone else. Those weapons had better be there somewhere.

Of course, there were no weapons. Was this a transformative experience for Aaronovitch? Nope.

Flash forward 15 years, and its dejá vù time. Again, Corbyn is the genuinely moderate voice calling for an evidence-based approach before we jump to costly false conclusions. And again, Aaronovitch is in full attack mode.

Just to be clear, the Corbyn call for evidence re Russia is a smokescreen, just as was Ed Miliband's for proof of Syrian use of WMD in 2013. The truth is that he and his closest advisor consider the US to be the greater threat, and always have.

For the last three years, centrists have been bemoaning the “post-truth era” and “fake news”. Now, those same people are vilifying anyone calling for calm and considered behaviour in the wake of a serious incident. And they see no irony in their actions at all.

Welcome to the new McCarthyism. The witch hunt is on.