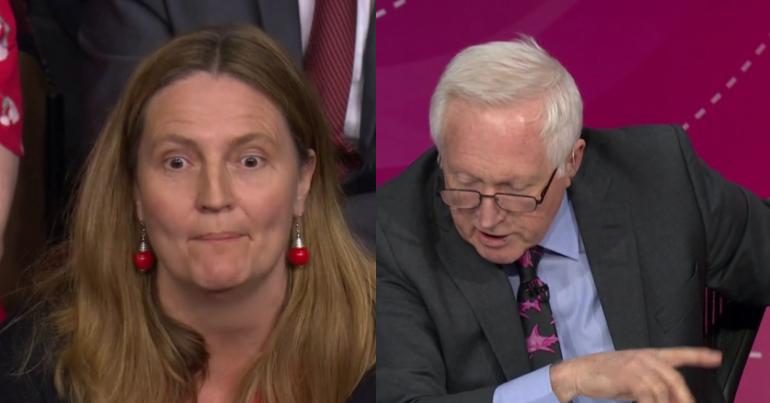 BBC presenter David Dimbleby is under fire after appearing once again to block a question on the humanitarian crisis in Yemen.

During Question Time on 12 April, the panel was discussing the potential for intervention in Syria. One audience member questioned the UK’s concern with humanitarian catastrophes.

Referencing a United Nations report saying Yemen was the world’s worst humanitarian disaster, the woman asked how the government could continue to sell arms to Saudi Arabia. The BBC host moved on from the question immediately.

Saudi Arabia is the UK arms industry’s biggest customer. It also leads the coalition which is currently bombing Yemen. Agencies have estimated that at least 22 million people, three quarters of the nation’s population, are in desperate need of aid.

The question came up in the middle of the debate about Syrian intervention. Despite a large round of applause from the audience, the question was ignored. The audience member said:

It’s a good point but, alright… let me call you back to the question…

The panel returned to discussing Syria, and no more points or questions relating to the UK’s relationship with Saudi Arabia or Yemen were raised in the show.

This is not the first time that Dimbleby has come under fire for seeming to block a question on Saudi Arabia. And on 8 March, there was no excuse.

At the time of filming Question Time, Saudi Crown Prince Mohammed bin Salman was in the UK, meeting the Queen, Theresa May and the Archbishop of Canterbury. Dimbleby still found it appropriate to divert a difficult question aimed at international trade minister Liam Fox.

Fox was quizzed on how his views on Vladimir Putin added up with his stance on Saudi Arabia. But before he had a chance to respond, Dimbleby blocked the question. He told the panellists they’d come back to it. But they never did.

Social media users are once again outraged at the BBC show’s refusal to address the issue of Yemen. One user asked if the reason for avoiding it was that it “doesn’t fit the BBC’s agenda”:

Hey #bbcqt why did we not address the lady’s question about the Saudi genocide in Yemen? And also, the fact we are selling arms to the Saudis? Is it because it would have been an admission of another woeful failing under the Tory govt? Doesn’t fit the BBC’s agenda?

Another attacked the government, calling its current stance a “joke”:

Let’s bomb Syria because Assad attacked civilians, but next door in Yemen let’s arm and support Saudi Arabia who are engaged in repeated bombing campaigns that has killed thousands of civilians.

The contradiction in the government’s position needs addressing. Even though Question Time bosses seem determined to avoid it, the public deserves answers.