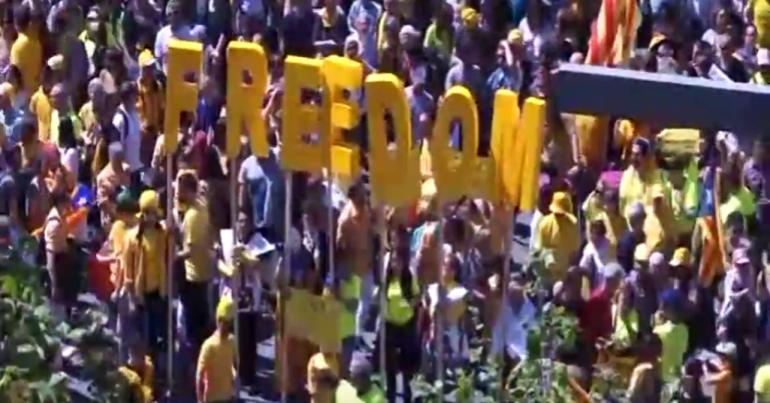 Hundreds of thousands of people took to the streets of Barcelona to call for the release of “political prisoners”, jailed Catalan politicians and activists, on 15 April.

Many Catalans face charges for their part in the independence referendum of 2017, including one former minister living in the UK.

The Spanish Government issued a European arrest warrant for former education minister in the Catalan regional government, Clara Ponsati, in March. Ponsati, who works at the University of St Andrews, is currently on bail.

“We want them back home!”

Protestors took over the streets of Barcelona. They marched behind a banner reading “For rights and liberties, for democracy and unity, we want them back home!”. However, Spanish justice minister Rafael Catala disputed protestors’ claims that those jailed are “political prisoners”, saying Spain only has “politicians in prison”.

Police figures said there were 315,000 people at the protest, but organisers claimed there were nearer to 750,000. Whole streets in the city centre were occupied:

On 1 October, the Catalan referendum took place, despite Spain saying the vote was illegal. The scenes of police violence that followed caused outrage across the world. Spain has continued to crack down on key figures within the movement.

Spain issued European arrest warrants for those who fled Catalonia after the vote. And the former Catalan president, Carlos Puigdemont, was detained in Germany on 25 March. The ex-Catalan leader has since been granted bail.

There are nine people in jail over their role in the referendum. These include the leaders of grassroots groups National Catalan Assembly and Omnium, who called the protest.

The arrest warrant issued for Ponsati details charges of violent rebellion and misappropriation of public funds. The combined charges carry a sentence of up to 33 years.

At the preliminary hearing at Edinburgh Sheriff Court, the two-week timetable for the case, starting on 30 July, was confirmed. Scottish human rights lawyer Aamer Anwar, claimed the charges were “politically motivated”:

Former #Catalan minister #ClaraPonsati emerges from court here in Edinburgh with @AamerAnwar after extradition hearing. They then met crowds of Scottish supporters. pic.twitter.com/Q5Qvo8Rig2

A crowdfund for Ponsati’s legal fees hit its £40,000 target in two hours. Former Scottish first minister Alex Salmond even joined the efforts. Over £243,000 has been raised at the time of writing.

Once again, a great civic and democratic demonstration. #Catalonia is asking for #freedom. We are European citizens who just want to live in peace, free and without fear #UsVolemACasa pic.twitter.com/TbLinSFUSD

While others said you couldn’t ignore a protest of this size:

According to the organization, 750,000 people participated in the demonstration for #rights and #freedom in #Barcelona, #Catalonia today. This can not be ignored.#UsVolemACasa #WeWantYouHome#LlibertatPresosPolítics #FreeCatalanPoliticalPrisoners pic.twitter.com/kl4ZyD5Zbr

Attempts to jail the independence movement’s leaders is clearly facing massive opposition. Spain’s decision appears to have strengthened support for the movement in the region. That thousands came out to take a stand in the streets is proof of that.