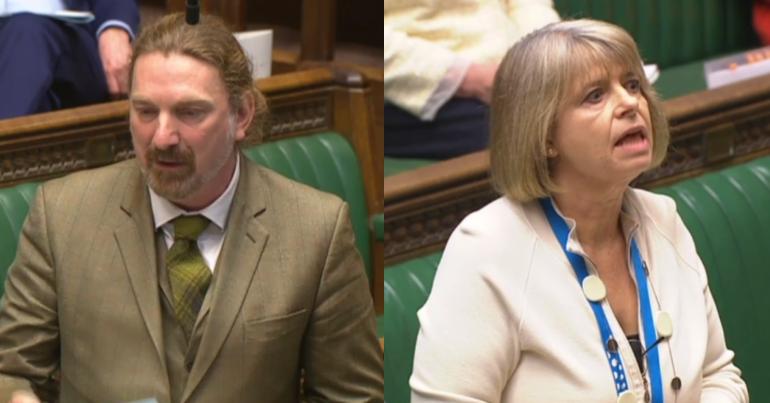 A government minister struggled for words on 24 April after being questioned by an MP on the UK’s complicity in Saudi Arabia’s attacks on Yemen.

SNP MP Chris Law attacked government policy in the wake of airstrikes in Yemen on the weekend of 21 April. At least 20 citizens were killed as Saudi-led coalition bombs hit a wedding. The bride was among those who died. This was reportedly the third deadly airstrike in days. One hit a house, killing a family of five. And another hit a commuter bus, killing at least 20 civilians.

Law told the minister of state for international development, Harriett Baldwin, that if the government does not act, then it is itself “complicit” in these attacks.

Saudi Arabia is the UK arms trade’s largest customer. Sales to the kingdom have risen by almost 500% since the start of the assault on Yemen. In March, the UK government signed a provisional deal for the sale of 48 BAE Systems fighter jets to the regime.

Speaking in the chamber, Law condemned the government for arming the Saudi regime. And calling for an arms embargo, the Dundee West MP said the House should:

quite rightly condemn… Saudi Arabia and its coalition for its targeting of innocent people.

The SNP MP added that the UK government must recognise that, unless it acts, it is “complicit in these atrocities” and is undermining “the government’s international development spend in Yemen”. He also called on the government to “commit today to fully and finally halt all arm sales to Saudi Arabia”, and set out how it would “influence Saudi Arabia to bring about a meaningful and political solution to the war in Yemen”.

Baldwin stuttered in response, seemingly taken aback by the question. The minister said:

Clearly, uh, it is, uh, the case that, uh, the UK is, uh, saying to all sides in this conflict, uh, that, uh, the way to secure peace is through the political dialogue. And the way, uh, to, uh, to secure pace, p-p-peace is, of course, uh, through, uh, ensuring, uh, that, uh, both on, uh, the – the side of the, uh, Houthis from Yemen into Saudi Arabia, uh, but also that, uh, international humanitarian law is respected, uh, in terms of, uh, this, uh, conflict.

Baldwin then claimed that the Saudi regime has “processes in place” to comply with international law. The minister cited a court case where the sales were challenged last year.

You can watch the video clip here:

Despite condemning the weapons sales, the SNP has a complicated relationship with BAE Systems. The firm is the biggest UK-based supplier of arms to the Saudis.

SNP-run Glasgow City Council invited the weapons manufacturer into schools in the city last year. Parents complained that they weren’t notified, saying the visit was “deeply unethical”. When questioned by The National, the council defended the decision.

The administration has also defended an arms trade exhibition set to take place in Glasgow this June. The Undersea Defence Technology exhibition at the city’s SEC has been backed by both the council and the charity Glasgow Life. BAE Systems is the lead sponsor at the event.

There needs to be relentless pressure on the UK government to:
1. Stop all arms sales, military support and training to Saudi Arabia
2. Speak out forcefully and unequivocally against its atrocities in #Yemen
3. Rid the UK of its dependence on oil imports#NotInMyName

UK Govt talks about humanitarian crisis in Yemen and yet we continue to sell arms to Saudia Arabia who are bombing Yemen. Stop arms sales and bring a resolution to the UN Security Council to establish a peace process.

During the Urgent Question on #Yemen, @KateOsamor asks whether after the appalling airstrike on a wedding party killing 20 – including the bride – the UK will now finally suspend its arms sales to Saudi Arabia. pic.twitter.com/MuHRNg1Ozq

It is clear that the UK has not been able to influence the Saudi regime through its ‘strong relationship’ with the kingdom. Surely, the time has come now to say enough is enough.