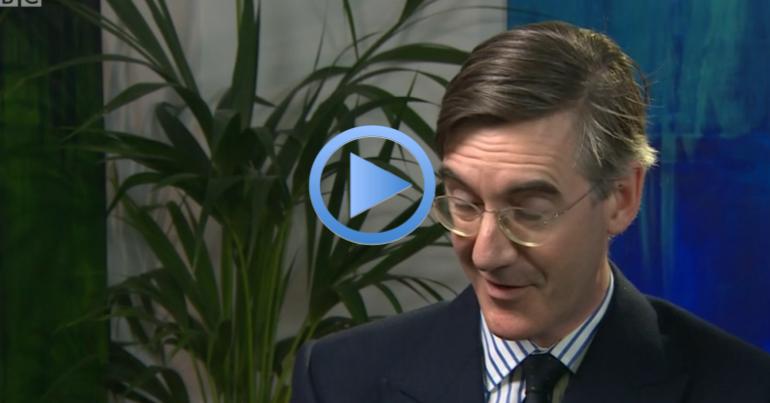 The Conservatives’ Brexit poster-boy Jacob Rees-Mogg was left red faced after struggling with basic questions about the Irish border.

In the interview with BBC Northern Ireland‘s Mark Carruthers, Rees-Mogg floundered as he admitted he hadn’t visited the border region.

During the unrelenting questioning, the Conservative MP made some incredible statements. This included claiming that visiting the border would not give him any “greater insight” into the situation.

Rees-Mogg also confirmed he has not recently been to Northern Ireland in any capacity.

The Conservative MP is one of the leading pro-Brexit voices. He has repeatedly argued there will be no hard border in Ireland post-Brexit.

In the interview though, Rees-Mogg bizarrely claimed visiting the border would not give him a “fundamental insight”. Responding to Carruthers, the MP said:

I don’t think my visiting the border is really going to give me a fundamental insight into the border beyond what one can get by studying it.

The interview featured on 10 May’s edition of The View. You can watch a clip of the exchange below:

Further into the interview, Rees-Mogg claimed visiting the border would not be “particularly relevant”.

People took to Twitter to share their views about the interview. One branded him a “preposterous figure”:

It defies belief that there are people who see him as some kind of people’s champion. He’s a preposterous figure with no other reason to be an MP than his presumption of a right to rule over the lower classes.

Others questioned the attitude of hard-line Brexiteers:

This happened when @MarkCarruthers7 asked Jacob Rees-Mogg whether he's visited the Irish border recently.
Wonderful exposure of the "know nothing and why would I want to find out?" attitude of so many #Brexit fanatics.pic.twitter.com/ILzixipzGK

Others were just delighted to see the right-wing MP being held to account by a BBC journalist:

Someone, at last, not just letting home get away with rubbish. Well done

Time for the BBC to do some poltc correspondents swaps, for the next 6 months. You send some of yours from Belfast to ask some tougher questions here & you can have some of ours from Westminster.

While it was certainly good to see Rees-Mogg being held to account, his complacency was worrying. Once again, the Conservative MP has shown a real disdain towards the people who will be most affected by Brexit. It seems he’s more than happy to sit with his head in the clouds. And for someone who wishes to keep the UK together, that’s a very dangerous attitude to adopt.