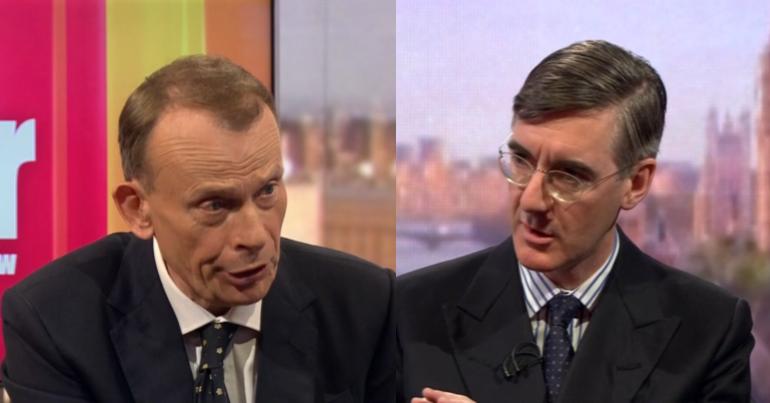 The patriot’s patriot Jacob Rees-Mogg found himself in the firing line on The Andrew Marr Show on 27 May. The Conseravtive MP faced some tough questions on his investment firm, which has been doing rather a lot of investing abroad.

These investments included over £217 million in Russian businesses. When quizzed by Andrew Marr, Rees-Mogg claimed innocence. But the MP co-founded Somerset Asset Management in 2007 and retains a stake of over 15% in the business.

Earlier this year, Rees-Mogg led the charge for tougher sanctions on Russia. But recent revelations show his hedge fund has extensive Russian holdings.

Quizzing the Conservative MP, Andrew Marr asked if the investments in Russia were the “patriotic or happy thing to be doing?”

Rees-Mogg responded by claiming the business has a duty to invest as well as its clients demand, subject to “the law of the land”. But Marr interjected, asking:

Isn’t it awkward to be making so much money from these investments while at the same time disaproving of them?

The Conservative MP then made the incredible claim that he did not make money from his clients’ investments. Marr immediately challenged that point, forcing Rees-Mogg to admit that he does make money from the company. It is believed that the MP has cashed in over £4m from the firm since his election to parliament eight years ago.

You can watch a clip of the exchange below:

WATCH Jacob Rees-Mogg asked THREE times before admitting he makes money from his hedge fund's investments in Russia and Saudi Arabia. He made £176,000 from the firm last year, our story here: https://t.co/YulWbcpN0G pic.twitter.com/01dICooKfn

Social media was quick to latch onto the fact that the leading Brexiteer appeared a little ruffled at the questioning, with some comparing Rees-Mogg to a “naughty schoolboy”:

Others pointed out some pretty gaping flaws in the MP’s arguments:

"I no longer run Somerset Asset Management" says Jacob Rees-Mogg, before going on to explain why its clients' money is invested in a Putin-linked bank: "They've asked us to invest it in emerging markets…"

And some just asked the obvious question:

#Marr why can’t Jacob Rees Mogg use his investment company to invest in Britain if it’s the case that Britain will do so well after Brexit? Instead he’s inexplicably investing in Russia

For someone so determined to promote the values and economy of Britain, these investments don’t look good for Rees-Mogg.

He’s denied claims he wants to be the next leader of the Conservative Party. That’s probably for the best because these revelations wouldn’t do a leadership candidate any favours.