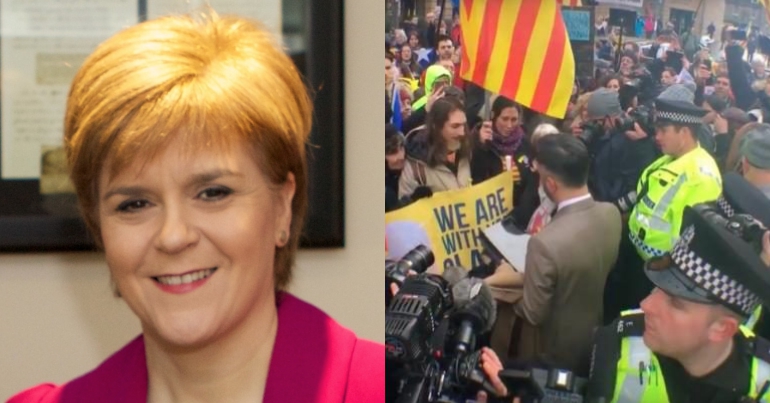 Scottish politicians and campaigners are celebrating after the Spanish government was forced to withdraw arrest warrants for several Catalan politicians. These included the warrant seeking the extradition of Clara Ponsati, who was set to appear in court in Edinburgh on 23 July.

The Spanish judiciary made the decision after German courts ruled against extraditing former Catalan president Carlos Puigdemont on charges of rebellion.

The Catalan independence referendum took place on 1 October 2017.  Spain declared the vote illegal, and the scenes of police violence that followed caused outrage across the world.

Spain has since continued to crack down on key figures within the movement. It also issued European arrest warrants for those who fled Catalonia after the vote. The charges listed included rebellion and misuse of public funds.

Ponsati left Catalonia after the vote to St Andrews in Fife, Scotland. Ponsati had previously worked as a lecturer at the town’s university and returned to her role in 2018.

Scottish human rights lawyer Aamer Anwar, who represents Ponsati, said they were still awaiting official confirmation from Spain that the warrants had been dropped.

The former Catalan minister received the backing of several prominent Scottish politicians, including Nicola Sturgeon, who was quick to welcome the news:

If true, very good news that extradition proceedings have been dropped against @ClaraPonsati. Political differences should be pursued democratically not through criminal courts. Let’s hope she is now allowed to get on with her life – and being the credit to Scotland that she is. https://t.co/GW46YcDk4h

Spain has withdrawn its European arrest warrant against Clara Ponsati. Presumably Justice Llarena has realised he would be humiliated by Scotland's judicial system, which would have exposed human rights abuses. https://t.co/pEYKeZZAyK

Although the arrest warrants have since been withdrawn, the exiled politicians would still be detained if they returned to Spain. It’s eight months since the first politicians involved in the Catalonian independence referendum were jailed.

Nine Catalan politicians remain in jail over charges related to their part in Catalonia’s 2017 independence bid. They could each face up to 25 years in jail when their cases come to court.

Lynn Henderson of the Scottish Trades Union Congress emphasised that the fight is not over:

Welcome news that Spain has withdrawn European arrest warrant for ⁦@ClaraPonsati⁩ but she remains in exile in Scotland, and the fight for justice continues https://t.co/lzpjmh9eLi

Waiting for official confirmation but this is fantastic news for @ClaraPonsati. What a humiliating disaster this has been for the Spanish state. Time to drop the charges and let Clara & the other exiles return home. https://t.co/NakkAz5VrP

In an official statement, Anwar said that all exiled politicians must be granted the right of return. He added that all political prisoners should be freed with “no conditions attached”:

My statement on withdrawal of Arrest Warrants issued on behalf of @ClaraPonsati & the ‘humiliating defeat’ of Spanish authorities & their ‘politically motivated prosecutions’ #llibertatpresospolitics🎗🌹 Lluitarem fins al final, i guanyarem! pic.twitter.com/CmF04JUPL3

The thought of political prisoners in 21st century Europe is rightly unsettling. And regardless of how the Spanish government attempts to spin it, there can be little doubt that these people are imprisoned because of their politics.

The decision to revoke the arrest warrants is a welcome one. Hopefully, more action will now follow.

Featured image via Wikimedia/US Department of Education and screengrab