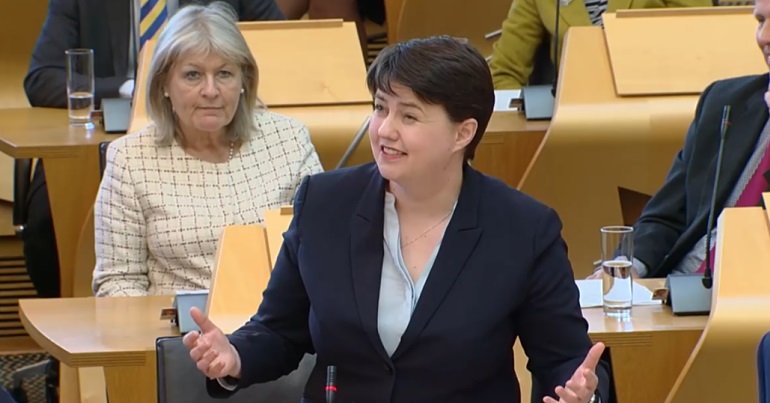 The SNP has put pressure on the Scottish Conservative Party to confirm if ‘dark money’ part-funded its general election campaign. SNP MP Pete Wishart has accused the Tories of “always operating at the edges of what’s permissible”.

Dark ‘Tory dark money’. Won’t tell us where it came from. Won’t let us see accounts. Always operating at the edges of what’s permissible. Always hoping to get away with it. Our electoral laws aren’t ‘optional extras’. They’re there to make elections fair. https://t.co/cudyQL0Kq1

As reported in the Herald, Cook does not have to say where the money came from. But he has been challenged to explain [paywall] this donation because of its ties with the DUP, based in Northern Ireland.

All those "dark money" groups. pic.twitter.com/fixQFBmx6L

What is ‘dark money’?

‘Dark money’ in this context refers to the funding of political projects through complex arrangements that often hide the true identity of the donors. openDemocracy uncovered the network that involved Cook and the DUP. It also investigated the funding of Jacob Rees-Mogg’s European Research Group. The case of the Scottish Conservatives was exposed by the Ferret on 26 June. It uncovered a “secretive trust” that had donated £319,000 to the Scottish Conservatives since 2001. The Scottish Unionist Association Trust (SUAT) is under investigation by the Electoral Commission for the permissibility of its donations. The trust eventually declared its trustees and its permanent address, which had not been made available at the time of the Ferret’s original investigation.

The National reported a statement issued on behalf of the trustees:

The Trust was formed in 1968 from assets of the (then) Scottish Unionist Association, primarily sales of property assets. It invests those assets and makes the proceeds available to further the aims of the Scottish Conservative and Unionist Party. All UK taxation liabilities have been and continue to be met in full… We are in dialogue with the Electoral Commission and it would be inappropriate to say more whilst that dialogue continues.

One of the trustees, former shadow Scottish secretary and Tory MP Peter Duncan, lobbied Scottish Conservative MSPs. This was on behalf of his communications company, Message Matters. The Scottish Green Party has claimed that a trustee funding the Tory MSPs and lobbying them is “not compatible”.

High-profile Tory MSPs and MPs such as deputy leader Jackson Carlaw and Douglas Ross have accepted donations from SUAT. SUAT also provides an office space in Glasgow for the Scottish Conservatives, which may raise further questions.

Only just caught up with the detail of this Scottish Tory #darkmoney story in @FerretScot. Surprised there aren’t more media questions being asked about it – as well as about the Richard Cook/DUP story. https://t.co/doxfk8Dk1n

The tweet from Sturgeon came because the story had failed to appear on either the BBC or STV News.

Ian Blackford, the SNP’s leader in Westminster, addressed the ‘dark money’ issues during prime minister’s questions, which led to media coverage. This is what Blackford had to say to Theresa May:

This is getting ridiculous now

As reported [paywall] in the Ferret, both newly elected Tory MPs Douglas Ross and David Duguid received £7,500 from SUAT during the election. Wishart has called on Scottish Conservative leader Ruth Davidson to clarify if these funds were used during the 2017 general election. This also includes the newly elected MP John Lamont because his Dumfries and Galloway branch received the largest donations from SUAT over the 17-year period.

These ‘dark money’ revelations have been in the public domain for nearly a month. It’s therefore time for Ruth Davidson to be open about her party’s involvement.

#DarkMoney #DarkMoneyDavidson #ToriesOut #BrexitShambles @theSNP
They seek her here. they seek her there. But Ruthie cannae be found anywhere! pic.twitter.com/rWs0znsFhE

With this constant drip of revelations on the CRC &other Unincorporated Associations it becomes harder for @RuthDavidsonMSP to ignore me and other Scots who are desperate to hear an answer: What did she know and when did she know it? #DarkMoney https://t.co/2Y56sDHKRT

On Friday I asked @RuthDavidsonMSP for an interview on @ScotTories' links to #DarkMoney. She has refused to respond. @BBCScotlandNews has not asked her to interview. This is a British media whitewash. This is a scandal. https://t.co/FLcyu1JggZ

It’s also time that the media held Scottish Tories to account because of the implications on fair and transparent democracy.

Featured image via The Scottish Parliament/YouTube