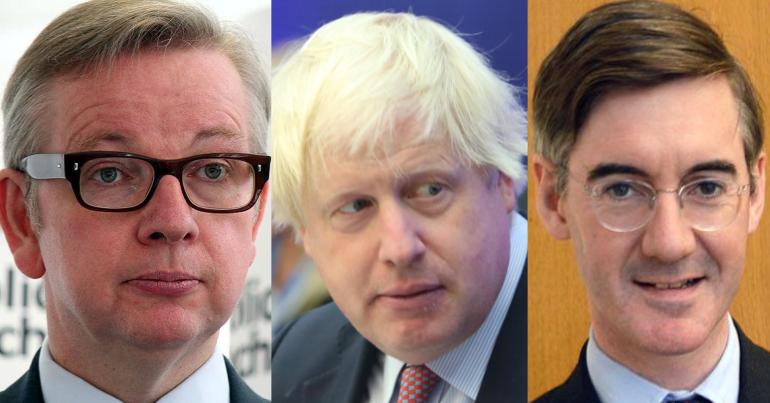 Senior Conservatives have come under heavy criticism after a series of discussions with a fascist were revealed. Top Brexiteers Boris Johnson, Jacob Rees-Mogg and Michael Gove have all had direct contact with far-right American strategist Steve Bannon.

The meetings were even too much for Mail on Sunday journalist Dan Hodges to stomach. Meanwhile, Labour MP David Lammy has led the charge against the trio, labelling them a “national disgrace”.

The US-born strategist is a former advisor to US President Donald Trump. Bannon recently addressed a meeting of the National Front in France, where he told the audience to wear accusations of racism as a “badge of honour”.

Bannon and the UK

According to Reuters, Bannon confirmed he had been in touch with the three senior Conservative MPs. The former Breitbart editor said he had direct conversations with Johnson and Rees-Mogg, as well as Gove, who is a cabinet minister in Theresa May’s government.

The far-right strategist said he texted Johnson “a lot” and spoke on the phone when in London earlier this month. He described Johnson as “one of the most important” political figures on the world stage.

The news came as Bannon announced plans to create a far-right anti-EU ‘supergroup’ of MEPs in the EU parliament.

There was a mix of shock and anger on social media after the story broke. Labour MP Lammy did not hold back:

Rees-Mogg, Gove and Boris are now all in cahoots with America's leading fascist, Steve Bannon. These men are treated like a joke, but they are a menacing threat. They call themselves patriots, but they are a national disgrace. https://t.co/X0qkGdU2Pv

Neither did columnist and activist Owen Jones:

Leading members of the Conservative Party, indeed leadership contenders, are colluding with a fascist. Why is this not a national scandal? https://t.co/1ejWUIbtYO

The backlash to the news was not only from the left though. Hodges tweeted in support of Jones’ comments:

Don't say this often, but @OwenJones84 is right. What the hell are Johnson, Mogg and Gove doing palling around with this guy. Johnson and Mogg I can sort of understand, they're just opportunists. But Gove? https://t.co/YnnCf9KUeM

And Hodges was not alone in his criticism either. Former director of communications under George Osbourne, James Chapman, also condemned the meetings:

Bannon in touch with Johnson, Gove and Mogg, according to Reuters. If we don't stand against this, then what? https://t.co/dY2L9LqOXo

Bannon in the EU

Since falling out of favour at the White House, Bannon has been looking increasingly to Europe. Inspired by Brexit, he sees the current climate as an opportunity to gain a foothold in the continent.

A spokesperson for Gove told Reuters that he had met Bannon once briefly and that two meetings had been planned but never took place. It reported that the government minister did not discuss anti-EU politics with Bannon. But despite these denials, the accessibility of UK ministers to a far-right figure such as Bannon is worrying.

For the Conservative Party though, this is just another milestone of its slide into the realm of the far right. And we must be on hand to challenge that decline at every step.