A left-wing bookshop is attacked by 'mask wearing fascists'. In Britain. In 2018. - Canary 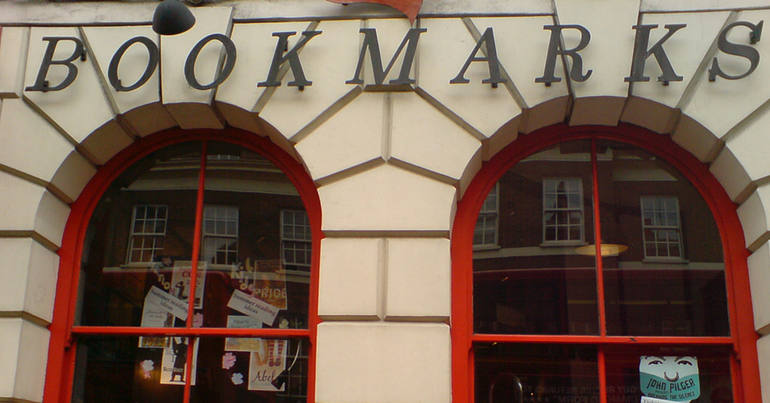 A left-wing bookshop in London has been attacked by a group described as “far-right thugs” and “mask wearing fascists”.

The attack, on the Bookmarks socialist bookshop in Bloomsbury, took place on the evening of 4 August, just before the shop closed. Bookmarks says the attackers ripped up books and magazines and destroyed displays.

On Saturday evening around 6:45 just as we were closing. Bookmarks was attacked by around a dozen mask wearing fascists. The attempted to intimidate staff and customers and to destroy books and materials…. https://t.co/HLYGpuMKPL

A Stand Up To Racism press release reported a Bookmarks staff member of staff saying:

Books on Islamophobia were ridiculed and thrown around. They chanted about Muslims and paedophilia, and called us traitors. While not mentioning Tommy Robinson the links are there to see.

Stephen Yaxley-Lennon (aka Tommy Robinson) was jailed in May after live-streaming at a trial in progress. The Islamophobe was released on bail on 1 August after being granted a retrial by the Court of Appeal. He presents himself as a “martyr” for free speech. ‘Free Tommy Robinson’ demonstrations in June and July 2018, while Yaxley-Lennon was in prison, both led to violence.

“This is an outrage”

There was widespread revulsion at the attack on the bookshop:

Solidarity to #Bookmarx & all who work there. This is how Fascism begins, to attack ideas & books. NO PASARAN.

I expect to see this on @BBCNews . Together with a Tommy Robinson spokesman who is appalled at this attack on freedom of speech and freedom of distribution of material . That's Tommy's platform? Right?

This is an outrage. We cannot afford to ignore the rise of the far right. Fascists destroying books should be a wake up call for many. Solidarity with you all. I’ll be sure to stop in on Monday to show my support.

Free speech and independent bookshops – under threat in an age where intolerance and Amazon flourish – should be cherished. Utterly despicable… https://t.co/93Qoh8G1cH

Far-right bigger threat than in many years

A recent report from anti-racist group Hope not hate warns [pdf p6] that whilst membership of far-right groups has declined in recent years:

at the same time, the far right poses a bigger threat – in terms of violence and promotion of its vile views (particularly anti-Muslim views) – than it has in many years.

Stand Up To Racism also warns that the far right are “mobilising” and attempting to “re-organise and grow”.

In May 2018, many far-right groups came together for a ‘Day for Freedom’ demonstration in London. There were speeches from a variety of prominent far-righters, including Yaxley-Lennon, UKIP leader Gerard Batten, and alt-right figures including Milo Yiannopoulos and ex-London editor of Breitbart Raheem Kassam. Yaxley-Lennon said in his speech:

Co-operation across the far-right

Hope not hate said that the ‘Day for Freedom’:

was the most significant far-right gathering in London for years, marking a cooperation across the British far right of a sort unseen for decades around an anti-Muslim agenda.

The group claims that, whatever the far-right says about defending free speech, they don’t really believe in it. Certainly, the attack on Bookmarks shows that free speech from the left is not welcomed by them. But such an outrageous attack on a bookshop, in broad daylight, signals a worrying new confidence amongst the far-right.

– Support Bookmarks and other radical bookshops.