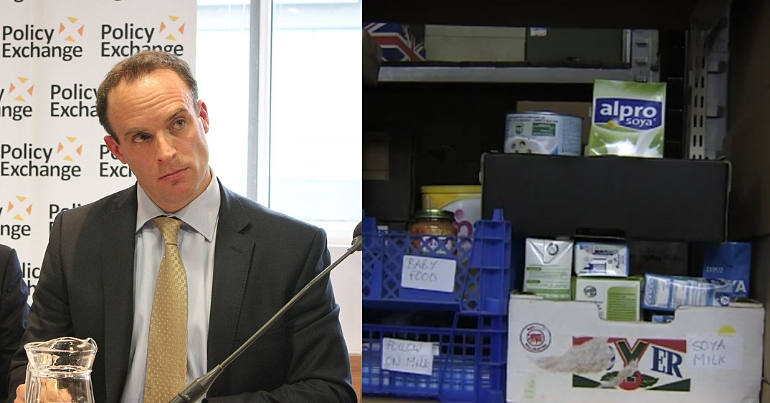 Some Conservative MPs just don’t know when to keep their mouths shut and their fingers away from Twitter.

Former Brexit secretary Dominic Raab has been to Tesco in Molesey to big up the store’s scheme encouraging customers to support the local foodbank. He says that the food bank is helping “families in our community, who are struggling at this time of year”:

Thank you to Tesco in Molesey and the Trussell Trust for partnering to encourage customers to generously provide food collections for families in our community, who are struggling at this time of year. pic.twitter.com/QkuCgQ8qAl

But they’re not really struggling – at least according to comments Raab made previously. In a TV interview last year, Raab explained why so many people were using foodbanks, saying:

Look, in terms of the food bank issue, I’ve studied the Trussell Trust data. What they tend to find is the typical user of a food bank is not someone who’s languishing in poverty, it’s someone who has a cashflow problem episodically.

The Trussell Trust supports over 420 foodbanks around the UK. And its research shows that a key driver behind the increase in demand is the rollout of Universal Credit. The Trust says:

“The height of hypocrisy”

Many Twitter users criticised Raab’s support for his local foodbank:

Absolutely disgusted at this post. You force people and families into the depths of dept and poverty then have the audacity to congratulate others who are trying to ease the pain and suffering you continue to create. Sick.

I’m struggling to take in that level of hypocrisy and lack of insight. And all done with a big smile on his face.

Like an arsonist thanking the Fire Brigade for putting out a fire.

Mr Raab, you cannot be unaware that the Trussell Trust’s own stats show >50% increase in food bank use in areas where universal credit was rolled out.

Your policies have *created* this crisis and your faux concern is the height of hypocrisy. https://t.co/OUjRlfdLSl

Raab is far from the only Conservative MP who might have been well advised to avoid the issue of foodbanks. Last year Jacob Rees-Mogg described the voluntary support given to food banks as “rather uplifting”

Meanwhile, new Department of Work and Pensions (DWP) secretary Amber Rudd has also missed the irony of Conservative MPs supporting foodbanks. She praised a scheme offering free travel to the foodbank in her constituency of Hastings, and even used to hold surgeries there:

And despite the 80% increase in demand at the Hastings foodbank, Rudd insists that she has seen Universal Credit “transform lives” in the town.

All weighing in on food banks

I am really pleased we have food banks in south east Cornwall.

And Steve Brine, Conservative MP for Winchester and Chandler’s Ford, was pilloried after formally opening a foodbank in his constituency, and tweeting “God bless them all”.

“Poverty is a political choice”

All these MPs have one thing in common. They are pretending that the austerity policies of their government are unconnected to the massive rise in foodbank use. Last month, the UN special rapporteur on extreme poverty and human rights issued a statement about his recent fact-finding visit to the UK. He concluded that “poverty is a political choice” and that “austerity could easily have spared the poor.”

One sentence in his statement is particularly damning:

British compassion for those who are suffering has been replaced by a punitive, mean-spirited, and often callous approach apparently designed to instill discipline where it is least useful, to impose a rigid order on the lives of those least capable of coping with today’s world.

This is the world Raab and all the other Conservative MPs praising foodbanks live in. Punitive, mean-spirited and callous – but pretending to care.