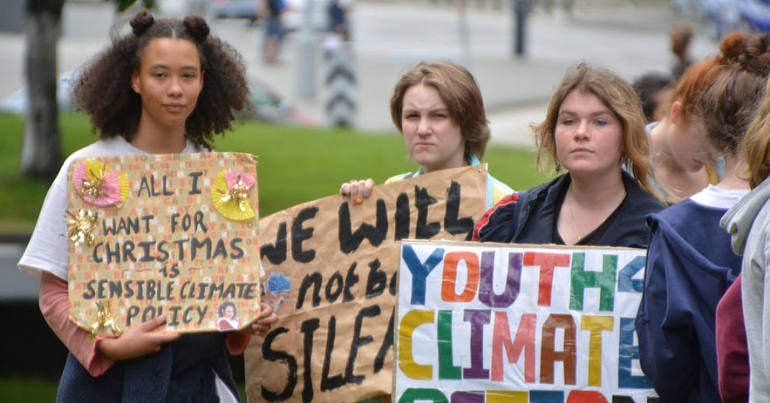 Thousands of Australian school children walked out of their lessons on 30 November to protest at their government’s lack of action on climate chaos. An estimated 15,000 children took part in the “Strike 4 Climate Action”, walking out of class in thirty towns and cities across the country.

Latest figures show that Australian greenhouse gas emissions grew 1.3% in the year to March 2018. But the 2015 Paris Agreement on climate requires Australia to reduce emissions to 26-28% on 2005 levels by 2030.

“Global climate conferences and all that nonsense”

Asked if Australia would be held to those targets, prime minister Scott Morrison said:

No, we won’t … we’re not held to any of them at all. Nor are we bound to go and tip money into that big climate fund. We’re not going to do that either. I’m not going to spend money on global climate conferences and all that nonsense.

The Australian strikers were inspired by fifteen-year-old Swedish student Greta Thunberg, who takes every Friday off school to sit on the steps of the Swedish parliament building in Stockholm, demanding more action from the government on climate chaos. The two Australian students, both 14, who asked others to join them in the strike, said:

A 2015 study showed that climate chaos will impact particularly severely on Australia, with more heatwaves, extreme droughts and fires. It is already having a huge impact on ecosystems, with mass coral mortality on the Great Barrier Reef, as well as huge impacts on other ecosystems across the country.

But despite clear evidence of the desperate situation, prime minister Morrison was dismissive of the children’s strike. He said in Parliament that

what we want [in schools] is more learning and less activism.

Some of the children on the march had a response to that:

The best thing you’ll learn about going to a protest is how to join the dole queue.

But his words didn’t stop children all over the country from walking out of school, many of them with creative signs:

This rally has the best signs of all time 😂 #ClimateStrike #auspol pic.twitter.com/OiadhbiXwf

And it’s not just in Australia. There have been school strikes in Sweden:

#CLIMATESTRIKE in front of Finnish parliament this morning.

We were sitting there and all of a sudden dozens (!) of schoolchildren joined. Gave me shivers and a whole lot of hope!

check out the crowd! #climatestrike Danish translation "all of them who're hopping… we demand a future!" #fridaysforfuture #schoolstrike4climate pic.twitter.com/gKIPaEOaR4

And students around the world are being encouraged to join #FridaysForFuture and walk out of school on 7 December during the COP 24 climate change conference in Poland:

Join @GretaThunberg: #FridaysForFuture #ClimateStrike Fri Dec 7. #WeDontHaveTime for bullies. We must stand together against the bullies who are jeopardizing our future# 1point5C. United we will win.
Register youth strikes from school during #COP24 here: https://t.co/lsISP8rW3g pic.twitter.com/rLwwvR1on3

At the rally in Sydney, 14-year old student Jean Hinchliffe had a clear message for the government:

This is our first strike. Our first action. And it is just the beginning. And we’ll keep doing it until something is done.

We are facing catastrophic climate change, which will affect today’s children long after those who caused it have died. Children around the world are showing the moral leadership that most governments utterly lack. It’s time we listened to them, and take urgent action for their future.