A 16-year-old tells world leaders, 'I don't want you to hope, I want you to panic' - Canary 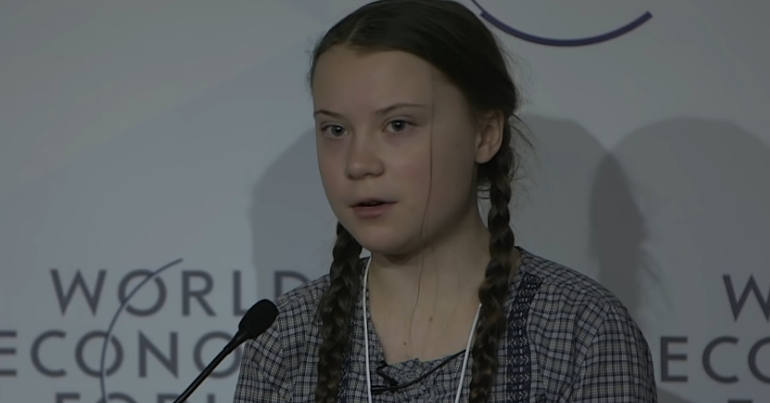 In August 2018, at the age of 15, Swedish student Greta Thunberg went on strike from school in protest at the lack of action on climate change. Five months later, the movement she sparked has led tens of thousands of students around the world to refuse to go to school on Fridays. And Thunberg herself has become one of the most prominent voices on the climate today.

Last week, world leaders arrived in Davos, Switzerland (many by private jet) for the annual meeting of the World Economic Forum. Thunberg, now 16, was there too – she spent 32 hours on the train, having stopped flying “for climate reasons”.

“I don’t want your hope”

In a speech to the forum, Thunberg said:

Action around the world

Thunberg’s school strike has inspired young people around the world to take action on climate change.

In Belgium, 32,000 young people walked out of school last week:

32.000 young students on the streets of Brussels today demonstrating for the protection if the planet.

Others are taking action in Germany:

This. is. AMAZING.
The school strike in Berlin is huge 💚#FridaysForFuture #Berlin pic.twitter.com/rb6qlWYUnP

ANNOUNCING MY FIRST EVENT! @zerohournyc & I are organizing a massive #FridaysForFuture #SCHOOLSHUTDOWN #ClimateStrike in AMERICA on Friday, March 15th 2019! We'll be joined by @Strike4Youth & @Fridays4future as YOUTH rise up and demand worldwide #ClimateAction! @GretaThunberg pic.twitter.com/qTj9cELIbL

The passion of young people standing for #ClimateAction
In Ireland. Powerful stuff.

Every Friday at 1pm outside the Dail.

Climate strike week 3. @GretaThunberg thank you for leading the way. You are right – with action does comes hope. #schoolstrike4climate #FridaysForFuture @theresa_may pic.twitter.com/pwC6dd3fOs

And others are acting in solidarity with young people:

Last Friday we reported live on Facebook from the #climatestrike in Bern, where roughly 1,000 people took to the streets chanting “system change not climate change”. There were marches in many Swiss cities. Do you think these demos will have any impact? #Fridays4Change pic.twitter.com/xiPfyaGwAh

Today i wanted to give up, but then, this happened. Later, a person joined me and a politician that works against climate change asked me to keep fighting!
[Medellín, Colombia]#ClimateStrike #FridaysForFuture#ClimateChangeIsReal pic.twitter.com/UpO4ElBHn4

Meanwhile, in the UK, young people are organising events around the country for 15 February, with locations so far including London, Manchester, Bristol, Glasgow and Cardiff.

The house is on fire

Thunberg finished her speech to the World Economic Forum by saying:

She’s right – the house is on fire. And most governments are not just ignoring the crisis but actively making it worse. Young people are absolutely right to go on strike to demand a liveable future. We need to stand alongside them and demand immediate and effective action on climate change.