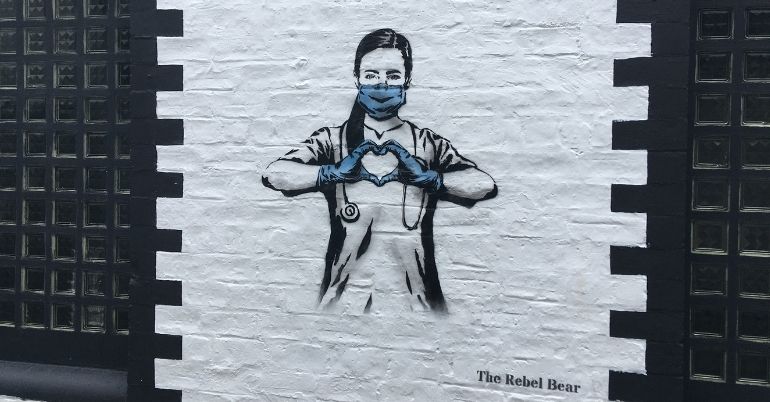 In November 2020, 14 health unions representing 1.3 million NHS workers came together to campaign for a pay rise.

Unions in support of the demands include the British Association of Occupational Therapists, College of Podiatry, Federation of Clinical Scientists and UNISON.

Coronavirus (Covid-19) cases are surging and the UK’s official Covid death toll has passed 80,000 since the start of the pandemic. But NHS staff continue to work every day in dangerous and life-threatening conditions.

According to Johns Hopkins University, the UK ranks 5th in the world for the number of Covid deaths, falling only shortly behind the US, Brazil, India and Mexico.

This is coupled with the fact that in December, a study published in the journal Occupational and Environmental Medicine, revealed that UK healthcare workers are ‘seven times more likely to get severe Covid‘.

Yet many news organisations seem to have forgotten – or, as Howard Beckett pointed out, barely mention – the financial situation facing NHS workers:

Today 14 unions have demanded a pay rise for the NHS.

It isn’t mentioned online on either the BBC or Sky News and got barely a footnote in the 9am News.

That’s what the establishment really think about those who have risked their lives so others may live.

In an open letter to Boris Johnson, the unions state that, “Covid-19 rates are rising fast” with “hospitals admitting more infected patients than before restrictions were announced in March.”

In July, when the government announced a pay increase for public sector workers, the NHS was excluded and workers are not due a pay rise until April 2021.

Another virus wave is already placing NHS hospitals under immense strain. In the call for the government to act, the letter adds:

They feel stressed, burned out and fearful. It is increasingly unrealistic to ask them to carry on regardless.

A significant increase this year [2020] would help health workers feel valued, by the entire country, and the government too. But bringing forward the wage rise in time for Christmas would also place the NHS in a better position to face the future.

Times may be tough, but you know morally this is the right decision to take. As you said at the Daily Mirror’s Pride of Britain awards last weekend, NHS workers are the ‘beating heart of the nation’. It’s time to do more than praise their courage and dedication. Grant them – and the NHS – the early pay increase they all deserve.

The pay rise in time for Christmas 2020 never came. But what did come was a letter providing a ‘Christmas gift’: One day – that’s right, one day only – of extra holiday and annual leave. And there’s not much more to say about that.

Clapping for the NHS as a tribute for their crucial services and hard work during a global pandemic is a moment that we should leave in 2020. It began as a nice way to bring the nation together. But it became a slap in the face to all healthcare workers: an embarrassing and frivolous gesture. Now, the time for empty gestures is over and a proper pay rise must be the way we thank NHS workers.

I'm an #NHS Worker, I do not need you to clap for me .. I would like to see this government fund us properly so we can provide the wonderful service we signed up to provide for you all ❤❤❤❤❤

NHS staff need your support now more than ever. But since the last #clapforheroes over 650 frontline healthcare workers have died. This time, instead of clapping for NHS staff will you maybe just stay at home for them instead? 🙏🏻

Stay at home 🏠
Protect the NHS 🏥
Save lives 💙

The hashtag #NHSblueheart was also trending last week and used as a way to show support for the NHS on social media. Although it was a brilliant way to highlight the tremendous healthcare workers online it’s still not enough.

We are devastated by the abuse NHS staff are getting on Twitter. Staff need your support now more than ever. If you stand with the NHS and its staff please you will help turn Twitter blue and pop an #NHSblueheart 💙 on your name on your profile 🙏🏻 Let’s get this trending, pls RT! pic.twitter.com/XQUZU7u0B6

Overflowing beds, understaffed, under-resourced hospitals and a lack of government support and financing are just a few ongoing pressures that our NHS faces. Now, the NHS could be quickly overwhelmed by the virus as workers face too many patients needing intensive care.

Alongside this, recent figures published by NHS Digital show that £38m has been taken out of NHS cleaning budgets leaving hundreds of NHS staff cleaners unemployed.

Now, more than ever we need to pull together and look out for our NHS – even if our government won’t.