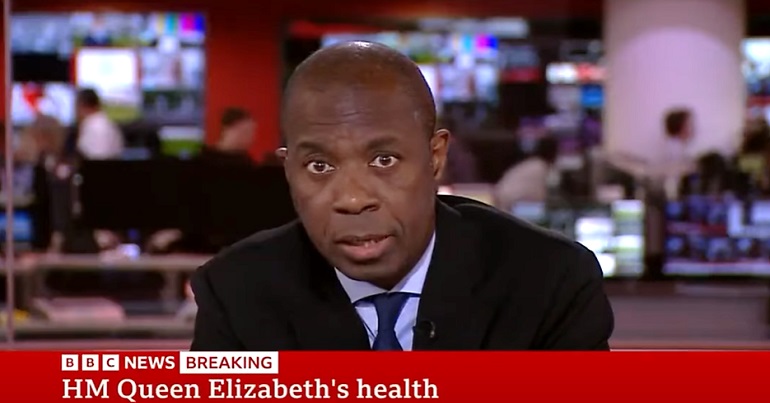 A BBC News presenter made an “awful” and “depraved” statement during live coverage of the queen, Elizabeth Windsor – even before her death. And it shows that the state broadcaster’s subservience to its overlords is as forelock-tuggingly terrible as ever.

“Insignificant” plebs vs the queen

As Evolve Politics‘ Tom D. Rogers tweeted, during the reporting on Windsor’s health before her death on Thursday 8 September, BBC host Clive Myrie said the current energy price crisis was “insignificant” compared to the queen’s health:

Here’s BBC News Presenter Clive Myrie saying that the Energy Bills Price Crisis is "of course insignificant now" given the "gravity of the situation" regarding news of the Queen's health. pic.twitter.com/G0fDGmDFf4

BBC reporter Damian Grammaticas clearly realised the error in Myrie’s comment – as he corrected him, saying Windsor’s health was ‘overshadowing’ the energy crisis. And to many people, the sheer awfulness of Myrie’s comment would have been obvious too.

Even with Liz Truss’s plan to change the October energy price cap to £2,500, this is still an increase of over £1,200 (or 95%) in 14 months. For context, in winter 2019/2020 around 8,500 people died due to cold homes. This was when the energy price cap was under £1,200. Deaths this winter are likely to be far higher, with poverty also set to rocket. Yet Myrie thought it appropriate to imply Windsor’s death was more important. As the Prole Star said:

We had to arrange an emergency run to top up my elderly Mum's electricity meter so she can put the heating on and have some warm food tonight.
In London, there are hundreds who will sleep rough in that torrential rain the media are waxing lyrical about.
That's not 'insignificant' https://t.co/LI4JgkMp80

But it wasn’t just BBC News UK fawning to the dead monarch. BBC News Africa showed colonialism wasn’t really over, as it whitewashed Windsor’s role as the head of the imperialist British state – calling it a “long-standing relationship”:

We take a look back at Queen Elizabeth II's longstanding relationship with Africa. pic.twitter.com/iWJix5nnlp

It’s worth remembering that on Windsor’s watch, the British state was still torturing Black people in Africa when they tried to get independence from us.

The queen and the BBC: feudal hangover

This kind of subservience and forelock-tugging from the state broadcaster is nothing new. Royal reporter Nicholas Witchell, who’s already come under fire for his coverage of Windsor’s death, previously disgraced himself with appalling reporting on her alleged child abuser son Andrew. The broadcaster’s coverage of Philip Windsor’s death was equally dire. Ultimately, though, as The Canary previously wrote, the BBC has been little more than a state mouthpiece since its inception.

Myrie openly framing the late, unelected, hereditary monarch’s health as more important than the rest of ours is low even by the standards of the BBC‘s already stunted bar. Of course, we can expect weeks more of this kind of dross. But ultimately, it’s appalling that in 2022 the state broadcaster is continuing to enact some kind of feudal hierarchy when it’s supposed to represent us, the public. Our lives are no less important than Windsor’s was. The BBC would do well to remember that.