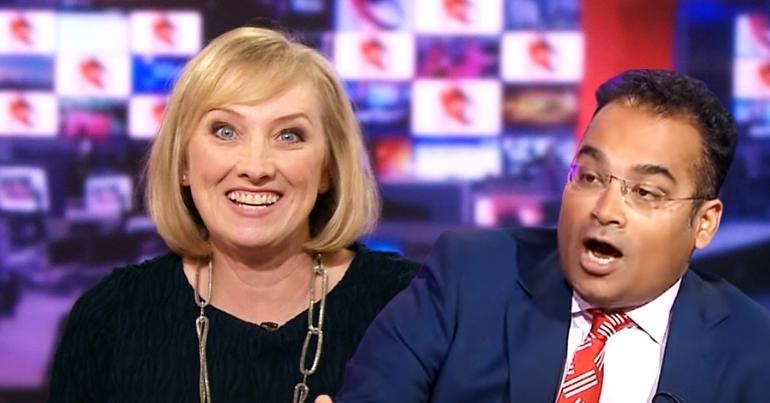 After Channel 4 suspended Krishnan Guru-Murthy for calling a Tory MP a “cunt” off-air, the BBC has also suspended one of its journalists – for laughing at a joke about Boris Johnson. Of course, right-wing screams of bias against Tories and Brexit bias are nonsense in terms of the BBC. The state broadcaster is, and has always been, a government mouthpiece.

Guru Murthy’s suspension was unsurprising, given that the future of Channel 4 still hangs in the balance. Currently, the Tories want to ‘privatise’ the broadcaster, stripping it of its public status. On Monday 24 October, Channel 4 said it was, according to the website Proactive:

considering whether it could raise money from charities and foundations so that it is no longer state-owned and on the government’s books.

This comes as the current culture secretary Michelle Donelan is looking at her predecessor Nadine Dorries’ case for privatising Channel 4. However, with the broadcaster’s future still uncertain, it can’t let its presenters call Tory MPs cunts – even if it’s the truth. Then, over at the BBC, things appear just as fractious.

As BBC News kind-of ironically reported itself, it has suspended presenter Martine Croxall while it investigates her. This is because of things she said during Sunday 23 October’s The Papers. Croxall opened the show by saying:

Well this is all very exciting isn’t it? Hello and welcome to our lookahead to what the papers will be bringing us tomorrow. Am I allowed to be this gleeful? Well I am.

Most people would see Croxall’s comments as her being excited about all the goings-on in parliament. Unless you’re a particular shade of gammon or a Karen – then cue the moral outrage on social media. This was then compounded by Croxall laughing at another guest’s joke about Boris Johnson – at which countless blood vessels probably burst across England.

In reality, and as Will Black summed up, the BBC is hardly filled with hordes of jam-making, girthy marrow-growing socialists:

I'm old enough to remember a BBC hack close to tears when it became clear that there was to be a hung parliament. And 12 years of #bbcqt cramming Question Time seats with white nationalists found on far-right websites

But the real issue here is not BBC impartiality. It’s the fact that the broadcaster pretends that it’s impartial. Actually, the BBC is an extended arm of government – and always has been.

As I previously wrote, noting the BBC is a “lame horse that needs to be put down“:

during the coronavirus (Covid-19) pandemic the BBC went onto a war footing. It was a similar MO to the one it had during WWII. It’s also the same one that led it to it being directly involved in espionage during the 1953 Iranian coup. It’s the same MO that led Marr to stand outside Downing Street at the end of the Iraq invasion in 2003 and say: ‘it would be entirely ungracious, even for [Tony Blair’s] critics, not to acknowledge that tonight he stands as a larger man and a stronger prime minister as a result’.

And it’s the same MO that saw the government fund the BBC to push Western propaganda in North Korea. The point being, the BBC has often worked as a propaganda arm of government; regardless of whether that government is Tory or Labour.

Of course, BBC bosses now have their ranks filled with Tories. So what we’re seeing now is an uptick in government bias. However, much like Marr’s fawning over Blair in 2003, as soon as Labour gets back in the BBC will toe the line with a Labour government too.

Croxall laughing about Johnson doesn’t show the BBC‘s problem with anti-Tory bias. It shows the broadcaster has a pro-government bias – and it doesn’t allow any deviation from that.  Who can forget Laura Kuenssberg having access to postal vote results before the 2019 general election which undermined Labour – a potentially criminal activity – with nothing being done about it? Yet Croxall has a chortle and the gates of hell have officially opened, with Jeremy Corbyn cutting the ribbon.

As the government drifts further into chaos, we can expect more silencing of barely-dissenting voices on Channel 4 and the BBC. God forbid the government hears about the Canary – because we’ll really be in for it.