Labour barely manages to show solidarity with refugees in Manston 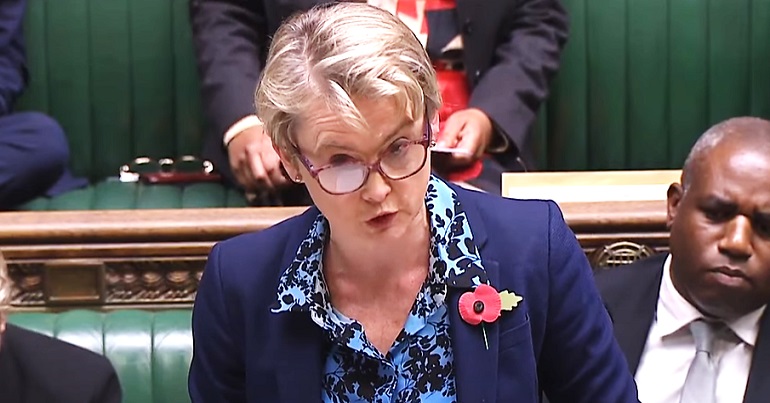 The situation at the Manston refugee centre has been deteriorating rapidly, with reports of disease outbreaks and horrific overcrowding. Disgraced home secretary Suella Braverman is directly to blame. However, Labour’s response has been dire as usual. It points to a broader problem with the party’s lack of anti-racism and openly xenophobic history.

Labour: no empathy for refugees

Labour’s shadow home secretary Yvette Cooper has been responding to the situation in Manston. Her focus has predictably been on the British public and Tory failures – not concern for refugees. In parliament on 31 October, Cooper noted that Braverman had said:

nothing about what she was doing to address those immediate public health crises and also the issues for untrained staff.

Labour's shadow home secretary Yvette Cooper says the "dreadful" conditions in the Manston migrant centre have been described as "inhumane" and there are "risks of fire, disorder and infection".

Cooper pushed a similar line on her Twitter. In response to Braverman’s use of words like “invasion“, she tweeted:

No home secretary who was serious about public safety or national security would use highly inflammatory language on the day after a dangerous petrol bomb attack on a Dover initial processing centre.

Of course, the priority when someone bombs a refugee centre is the British population and national security – not the welfare of the refugees who’ve just been attacked. Not that this lack of concern for refugees is new.

Well, the problem is the government are not deporting people today, even when their claims have failed.

Labour believe that the only problem with Braverman is that she isn't deporting people quickly enough pic.twitter.com/Yd6HNWz0pr

Of course, Labour taking a right-wing line on refugees for centrist gains is hardly new. However, the party keeps doing it to try and win votes with colonialist, racist Middle England.

For example, in 2015, people – including MPs – criticised Ed Miliband’s party for its “controls on immigration” mug:

This shameful mug is an embarrassment. But real problem is that immigration controls are one of our 5 pledges at all pic.twitter.com/4xslD22Gcm

However, the problems with Labour’s xenophobic stance stretch back further. In 2002, former home secretary David Blunkett defended a planned Labour policy of educating refugee children separately. He said that this would prevent child refugees “swamping the local school”.

It was Labour that opened the horrific Yarl’s Wood refugee detention centre in 2001 – arguably a precursor to the government-induced disaster unfolding now at the Manston facility. As a report by Right to Remain noted, under first Tory but notably Labour:

And while we all lose our shit over Braverman using “invasion” to describe refugees fleeing to the UK, let’s not forget that hallowed Labour leader Clement Attlee called the Windrush migration an “incursion”.

the idea Labour has ever been an anti-racist party is absurd… throughout its history, many within it have felt unease and distrust around making a positive case for anti-racism. Worse still, when politically expedient they have pursued racist rhetoric and policies.

So, here we are again. The Labour Party is copying right-wing rhetoric about refugees in an attempt to curry favour with Middle England Tory voters. Under Keir Starmer the party has demolished Jeremy Corbyn’s democratic socialism, and it’s back to centrism again. There’s not a fag paper between it and the Tory Party now – which is, of course, the way it wants it.