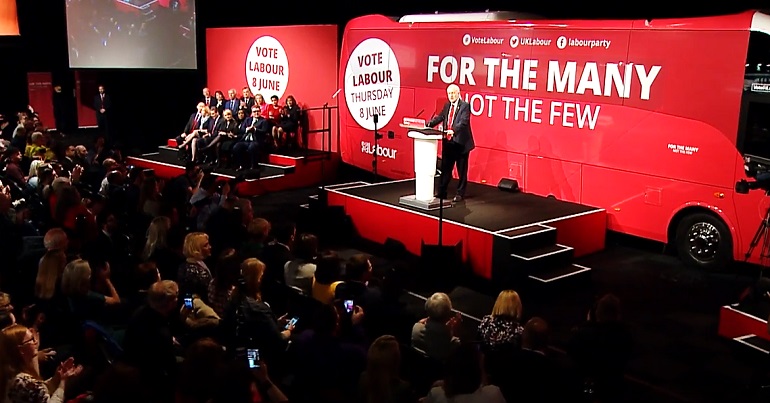 Jeremy Corbyn is always at his best when he’s taking a swipe at the Tories. However, his latest well-publicised dragging of them points to a deeper issue.

It’s been all over the media that Corbyn raised an official point of order in parliament over Rishi Sunak. As BBC News reported, addressing Keir Starmer the PM said:

This is the person who, in 2019, told the BBC – ‘I do think Jeremy Corbyn would make a great prime minister’.

Let us remember that national security agenda: abolishing our armed forces, scrapping the nuclear deterrent, withdrawing from NATO, voting against every single anti-terror law we tried, and befriending Hamas and Hezbollah. He may want to forget about it, but we will remind him of it every week, because it is the Conservative government who will keep this country safe.

The problems with Sunak’s statement are obvious. He blatantly lied about Corbyn’s Labour manifesto wanting to withdraw from NATO and scrap Trident – however much of this should happen. So, the former Labour leader hit back in parliament.

Corbyn used a point of order to drag Sunak. This is when an MP can tell the Speaker they think another MP has broken the rules. The former Labour leader said Sunak had:

a wholly inaccurate representation of the 2019 election manifesto of which he must’ve been fully aware.

If I am going to live rent free in his head at least he could accurately reflect what I think and what I say rather than inventions made up by him or his office.

Responding to Corbyn, failed Tory leadership candidate and the now-leader of the house Penny Mordaunt repeated Sunak’s lies about the Labour manifesto and NATO. Corbyn wasn’t having that either. He pointed out that the manifesto was “freely available” and that:

Had it resulted in a Labour government we would not have such poverty, such food banks, such misery in this country today.

During PMQs yesterday, @RishiSunak gave a wholly inaccurate representation of me and my views.

I have asked him to correct the record — and stop these tedious smears.

If the PM wants to solve the cost-of-living crisis, may I suggest he starts here: https://t.co/Rbwahr0511 pic.twitter.com/W6GE0RxtJh

Corbyn on the back benches: what a waste

Labour under Keir Starmer has veered so far from democratic socialism that it’s almost unbelievable. Amid the most vicious class war in decades perpetuated by the Tories, the opposition is merely aping them. If Starmer wins the next general election, Labour may of course offer some respite from the current chaos. But it won’t be enough.

The UK will experience another Tony Blair-like tenure. Starmer will merely prop up the capitalist system with false left-wing PR – giving his agenda a cuddlier sheen. Then, eventually, the Tories will get back in and we’ll repeat the cycle once more.

Corbyn’s manifesto could (and it’s a big ‘could’) have started a system reset on how we operate as a country. Admittedly, the establishment and the system would have pushed back hard. However, as the former Labour leader pointed out in parliament, things right now could have been very different. So, here we are – left watching Corbyn drag the Tories while the country is on its knees. What a waste.