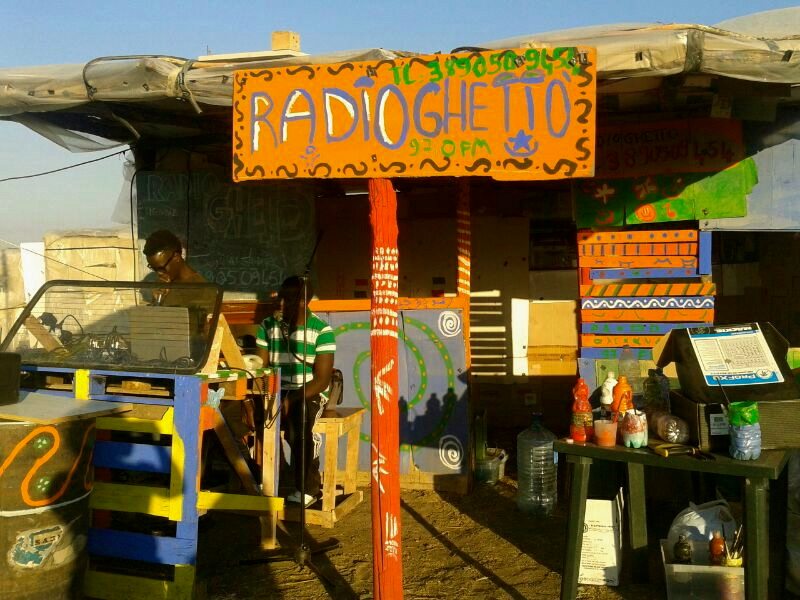 Radio Ghetto has been honoured with the Italian ‘Social Radio of the Year‘ award. The ceremony was held at the Expo, Italy’s Universal Exposition, in Milan on 3 October. But Radio Ghetto‘s refusal to attend the ceremony makes perfect sense. The controversial world fair, themed ‘Feeding the Planet, Energy for Life’, cost 13 billion euros in public money. Denouncing the exploitation and ‘new slavery’ of agricultural labourers in Southern Italy are among Radio Ghetto’s objectives.

Radio Ghetto is an independent radio run by workers living in the self-proclaimed ‘Gran Ghetto‘ of Rignano Garganico (Apulia, Italy). The workers, mostly from West Africa, represent about ten per cent of the seasonal labourers of Capitanata – one of Southern Italy’s most important regions for tomato production. The ‘Ghetto’ is considered the largest ‘shanty town’ of tomato pickers in Apulia. From July to September it houses around two thousand people.

Recruited and organized by caporali (gang-masters), workers are paid 3.5 euros per box of tomatoes they collect, collecting on average 10-15 boxes a day. The ‘Ghetto’ has no electricity and is served by just 20 chemical toilets.

Official statistics from 2013 show that 43 per cent of agricultural workers are undeclared. According to Amnesty International Italian laws make migrant workers especially vulnerable to exploitation. We know that in 2010, regular migrants worked 23.6 per cent of total working days in the agricultural sector. However, official statistics do not capture work of irregular migrants (those without papers), or undeclared work. This year, thirteen undeclared agricultural workers died from exhaustion or violence and a man from Burkina Faso was shot dead. His alleged crime is that he tried to steal some melons.

Radio Ghetto was created in the summer of 2012 under the impulse of the Campagne in Lotta network. The network was borne out of two struggles: the riots in Rosarno in 2010, and the 2011 strike of Nardò. Both were led by migrant agricultural workers. The Lotta network was set up in order to break workers’ segregation, to support workers with legal assistance, to provide a pathway for the exchange of knowledge and information, to facilitate social relations, and to promote political debate and action.

The Radio station, which examines living and working conditions, and the rights and laws of Italy, is part of this struggle. It also broadcasts music and news, and organizes singing and rap contests. It is run by workers at the end of their working day, and this year it was on air from 25 July to 6 September.

The Radio has declared in a public statement that it refused to attend the award ceremony as its aims are incompatible with those of the Expo, which dedicated a whole week of events to publicising the Italian tomato. There was no mention of the lives it costs, or the exploitation it relies upon. Instead, the highlights of the week were tomato-flavoured ice-cream, a special episode of The Cooking Show, and a Guinness-world-record pizza. How much better would those tomatoes taste if the Expo had spent a fraction of its 13 billion euros on the workers instead.