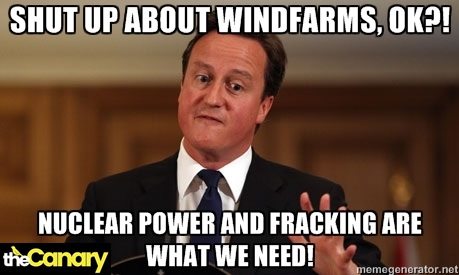 Tory voters can often be heard complaining about windmills polluting the skyline or about renewable energy sources being a drain on precious taxpayer resources. At the same time, the current government seeks to portray itself as a supporter of environmental protection. The truth, as I discuss below, is not only that renewables are very clearly cheaper and more viable than their non-renewable counterparts, but that the Conservatives actually seem to be doing all they can to destroy the UK’s budding renewable energy industry.

For E3G chairman Tom Burke, there was “nothing good for green energy about the Tories’ election” back in May, as the party’s “hostility to renewables” would get Britain “left behind”. Professor Paul Elkins then stressed that we would see “a fascinating exercise in how to reconcile seemingly inconsistent energy and climate policy objects” over the coming years. RenewableUK CEO Maria McCaffery, meanwhile, insisted that “people’s fuel bills [would] increase directly as a result” of government policies.

The Conservative Party’s continued insistence on being committed to tackling climate change was proven to be an example of “grotesque hypocrisy” over and over again, with the New Scientist speaking about the government’s backtracking on a number of climate pledges. (In March, the country had already been given a clue as to the Tories’ intentions when George Osborne announced “£1 billion worth of subsidies for North Sea Oil” in spite of the UK’s 2009 pledge to “phase out ‘inefficient’ fossil fuel subsidies”.)

If the Tories had been genuinely interested in protecting the environment, they may well have acted on the Greenpeace argument that “85% of British power” could easily come “via renewables by 2030”. And the path forward to this goal, suggested consistently by campaigners, has been that of onshore wind, with a Bloomberg New Energy Finance (BNEF) statement last week claiming that, due to “falling costs”, new windfarms were now actually “£20 cheaper per megawatt hour than coal or gas-fired plants”, and the “cheapest technology in the UK”. Fossil fuel costs, meanwhile, had continued to increase, making old arguments about renewables being “expensive” or “unreliable” completely out of date.

Furthermore, other countries have already shown us the way with their plans to turn away from non-renewable energy. Denmark, for example, “aims to be producing 84 per cent” of its electricity (rather than the current 29%) through wind power alone by 2035. Sweden, meanwhile, which actually imports waste material from elsewhere to produce energy, has recently announced its intentions to become “one of the first fossil fuel-free welfare states in the world”. The Scandinavian country, which already generates “around two-thirds of its electricity through renewable sources”, has now promised to allocate £356 million next year to green infrastructure, £4 million annually for “research into electricity storage”, and £80 million for “upgrading residential buildings to make them more energy-efficient”.

What the Tories have actually done

In the “the worst period for UK environmental policy in 30 years”, however, the British government has scrapped support for onshore wind farms, ended the “flagship green homes scheme”, watered down “the incentive to buy a greener car”, and given up on “zero carbon homes”. It has also sought to axe solar subsidies, allow “fracking in Britain’s most important nature sites”, end its green tax targets, and sell off the “green investment bank” (despite a similar scheme in the USA which looks “set to make $5 billion profit for taxpayers”).

Efforts to deal with the fact that “nearly a third of the UK’s emissions come from its housing, which is inefficiently heated and poorly insulated”, meanwhile, were left dead in the water with the scrapping of the Green Deal plan. And, as a “£1 billion tidal power scheme in Wales” was delayed, even Bank of England head Mark Carney criticised the government’s “lack of action to tackle climate change”. For Friends of the Earth, it was clear that Tory rhetoric was nothing more than “window dressing for a vicious Treasury assault on the environment”.

Osborne, meanwhile, seemed much “happier to give sky-high subsidies to Chinese nuclear power than support British solar”, in spite of repeated calls on the government to stop placing its faith in “a new generation of nuclear power stations” – a stance referred to by experts as “foolish” primarily “because such huge projects have a record of coming in late and over budget”. Just this week, in fact, criticism of plans to build Hinkley Point C (Britain’s first new nuclear power station for 20 years) intensified, with anti-nuclear group Together against Sizewell C (TASC) releasing a report insisting that the proposed plant would “waste billions of pounds without solving the country’s energy needs”. For TASC chairman Pete Wilkinson, said the British public desperately deserved an explanation from the government regarding its “increasingly bizarre and incomprehensible obsession with nuclear power”, as all alternatives to nuclear power “without exception” were better, “costing less, preventing power cuts, causing less pollution and meeting emissions targets”.

The Tory government was simply “backing the wrong horse”, said Greenpeace chief scientist Doug Parr, giving “strong support for new nuclear plants at a time when subsidies to renewables were being hacked back”. And “millions of British consumers” would suffer as a result of this “mistake”, paying “higher bills to subsidise costly, outdated and polluting power sources”.

In short, it has been a non-stop litany of bad news for the sustainable energy industry and for all stakeholders of a healthy planet (i.e. all of us).

The dire consequences for the UK’s renewable energy sector

In August, reports came in that the government was planning to “slash by 87% subsidies for householders who install solar panels on their rooftops”, a move that experts warned “could kill off a promising industry”. And so far this very month, two solar energy firms have already gone into administration (due, according to the Tories, to the companies’ “commercial decisions”). For Friends of the Earth campaigner Alasdair Cameron, it was clear that it was the Conservatives’ hostile energy policies that were threatening “over 20,000 UK solar jobs – with many more at risk in other green sectors”.

The Tories’ irrational hostility towards renewable energy soon had a negative effect on the UK’s standing internationally, too, with Ernst and Young (EY) reporting on how the country had “dropped out of the top ten of a respected international league table on renewable energy for the first time”, with the Conservative government essentially sentencing the renewable energy sector to “death by a thousand cuts”.

All of the progress elsewhere, then, “stands in stark contrast to the position of the UK government”, suggesting that Tory-style capitalism just cannot coexist with environmental protection. The current system, which is fundamentally based on greed, benefits only those who go where the money is. And the fact is that dirty energy is still king, and the more self-interested politicians like the Tories make cuts to investment and subsidies, the less hope there is for a thriving UK renewable industry.

In short, taking advantage of Britain’s incredibly windy climate is a brilliant idea backed up by scientific facts, and would actually benefit tax payers immensely. Due to what Naomi Klein calls “deregulated capitalism” and “cautious centrism” in the UK, however, we have to look to progressive parties and movements abroad for examples of genuine action on climate change. They have already responded to the “civilisational wake-up call” of global warming by altering their economies, lifestyles, and mindsets. It is now up to us in Britain to do the same.