Corbyn is right. It's time to renationalise our railways - Canary Workers’ Co-op 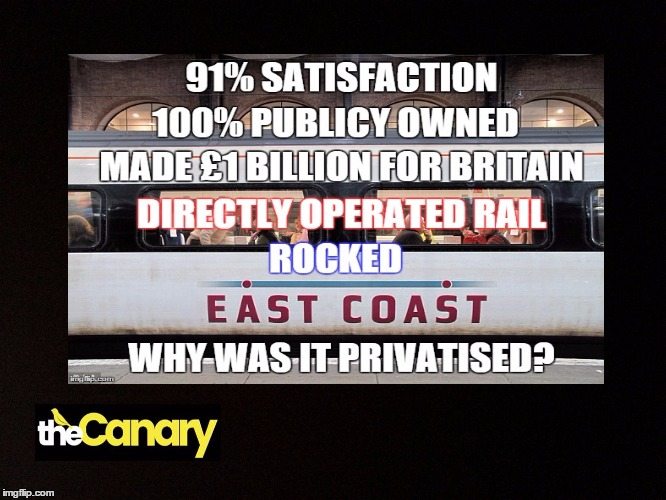 It was Jeremy Corbyn’s first official policy announcement after becoming leader of the Labour party, to bring large swathes of Britain’s rail infrastructure back under public ownership. Now he has the backing of the Trade Unions and his party, who say that it can’t happen quickly enough.

The issue appears to have broad based support with 62% of the public backing the measure. It’s a move supported across the left and right of UK commentators, with even die-hard Tories like Peter Hitchens calling privatisation a ‘mad disaster’ and supporting moves to renationalise.

The plans picked up pace last month with Trade Unions urging Corbyn to speed up the proposals should Labour win a majority in the next general election. They suggested that instead of waiting for the contracts to end on the various rail franchises, they should be swiftly nationalised by using the ‘break out clauses’ written into the contracts.

At the Labour party conference, the National Executive Committee made an announcement in line with the Unions’ proposals. It was met with widespread support from both the parliamentary Labour party and the membership.

Today, the rail system is complicated, fragmented and expensive for both taxpayer and passenger. 15 franchises draw money from public subsidies for a total of £3.8 billion, and then use it to pay out dividends to their shareholders worth £183 million. And while scandals regularly erupt over plans to pay board members six figure bonuses, our rail fares are the highest in Europe.

Behind the support for rail renationalisation is a mixture of national affection and the suspicion that the sell off of public assets is about cronyism and ideology, rather than efficiency, competition or a better service for the people.

East Coast mainline services were put back into private hands after they were rescued from the private sector in 2009. The National Express franchise running the train line had been unable to pay its bills, and Directly Operated Railways, a state-run body, was set up to take its place.

Described by Owen Jones as an “Achilles heal for free market ideologues”, Directly Operated Railways went on to become the most efficient rail line in Britain. Less than 1% of its income came from public subsidies and the service boasted a 91% customer satisfaction rating. It went on to pay back the treasury a total of £1 billion over the course of its life.

When the East Coast franchise was sold to a joint venture between Stagecoach and Virgin, the RMT union called it “a national disgrace.”

What a strange system – what we’re told about the difference between the private and public sector appears to be precisely the opposite. The private sector franchises are expensive and defend their privilege with zeal. Meanwhile the public service not only paid for itself but ran a surplus. Incidentally, the same was true of the Royal Mail, which netted the public purse £440 million a year before it was privatised.

When railways are in the hands of variety of private interests there’s very little we can do to change their policies. We can complain, of course, but they’re always going to follow their bottom line. With a nationalised railway we can hold the government accountable if fares are too high or when things go wrong. We can vote on what we see and challenge performance in public.

Having a debate about renationalisation of the railways means challenging the privatisation, deregulation, free market path that the Conservatives and New Labour have led us down these last few decades. It means recognising that the private sector is good for some things, but frequently fails to stand on its own two feet when taking on the tasks of the public sector.