Why are massive protests being planned for Paris climate summit? - Canary 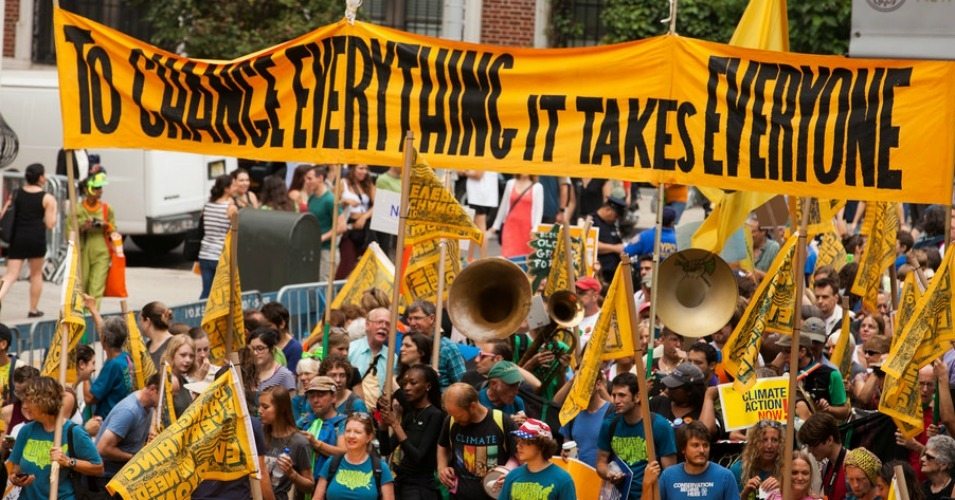 The governments of almost 200 nations are meeting in Paris this December to discuss a new global agreement on climate change, aimed at reducing global greenhouse gas emissions and thus averting the threat of dangerous global warming. However, climate change campaigners are planning to blockade the event, unconvinced that “austerity-dictating politicians, fossil fuel corporations, industry lobbyists, peddlers of false solutions and greenwashers” will be the sorts of people and organisations to solve the climate crisis.

Research by the Intergovernmental Panel on Climate Change (IPCC), the global scientific body that reviews, collates and synthesises the findings of climate science, suggests that in order to avoid catastrophic long-term changes in weather patterns, developed countries must reduce greenhouse gases by at least 25 per cent of 1990 levels by 2020, and 80 per cent by 2050. If greenhouse gas emissions continue to rise, we will pass the threshold, generally recognised by climatologists, beyond which global warming becomes catastrophic and irreversible. That threshold is a temperature rise of 2 degrees Centigrade above the pre-industrial level; on current emissions trajectories we are heading for a rise of about 5 degrees C.

Current commitments on greenhouse gas emissions run out in 2020; the Paris conference is thus expected to result in the adoption of an international agreement that will come into force in 2020 . The last climate change conference that had this much momentum behind it was Copenhagen 2009; it was hoped it would lead to an agreement for a framework for climate change mitigation beyond 2012, but failed to do so. While leaders agreed – for the first time – to impose limits on their greenhouse gas emissions, they did not produce a fully-articulated or legally-binding treaty.

However, activists point to another problem: the role of business. While some of the largest fossil fuel companies now publicly accept climate change and the need for (limited) climate action, they continue to support climate denial through influential lobbying groups and trade associations. For example, BP channels funds through its political action committee to climate change-denying US policymakers such as senator James Inhofe, chair of the senate’s environment and public works committee.

Greenpeace also obtained documents that show that energy companies funded a prominent climate change denier’s work. Over the last 14 years, Willie Soon, a researcher at the Harvard-Smithsonian Centre for Astrophysics, received a total of $1.25m from Exxon Mobil, Southern Company, the American Petroleum Institute (API) and a foundation run by the ultra-conservative Koch brothers.

Last year, the EU outlawed most subsidies for clean energy from 2017, and ended nationally-binding renewable targets after 2020. Documents have revealed that this was due to a coordinated campaign by fossil fuel firms. Companies such as Shell, BP, Total and Statoil lobbied so that a sole greenhouse gas target would take the place of policies that also supported renewable energy sources. This would encourage fuel-switching from coal to natural gas – a lucrative part of the companies’ business model.

Similarly, George Monbiot argues that, in the UK, the coal lobby is now so powerful that government is scrapping air pollution regulations.

In spite of all this, business is being given a participant role in the climate talks. In late May, a business and climate summit brought together leading private sector companies and government officials, in preparation for the December conference. A “business-focused” event, The Sustainable Innovation Forum, will take place on 7-8 December, as part of the conference, bringing together business, government, finance, UN, non-governmental organisations (NGO) and civil society participants. The summit itself is sponsored by businesses which include Renault, Nissan and Air France.

In protest against corporate influence, and to pressure governments into making serious commitments to avoid dangerous climate change, campaigners have promised the largest climate civil disobedience ever.

Grassroots groups have set up the “Climate Games” event  – “a giant, direct action playing field for climate justice”. A potentially huge march on 29 November will kick off the Games as world leaders arrive at the summit. As the conference continues, protesters are intending to use a mixture of street art, direct actions and online hacks.

There will be ten blockades, themed around red lines which people fear negotiators inside the summit might cross – such as equitable climate finance for poorer countries, or meaningful emissions reductions. At the blockades, forums will debate a new wave of actions for 2016, aimed at keeping fossil fuels locked underground.

For more information about actions taking place in Paris and elsewhere, on transport and accommodation, check out the pages of groups such as Global Justice Now, or No Dash for Gas.