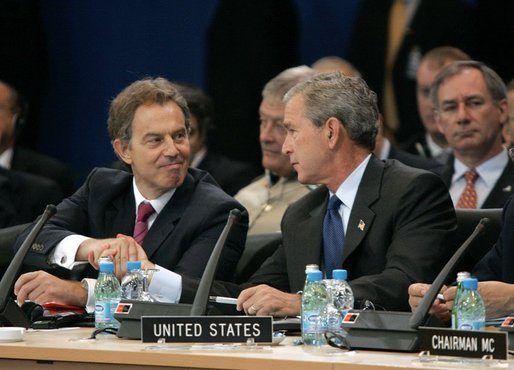 This weekend, a memo from Hillary Clinton’s email account was released by US courts. It was written by former Secretary of State Colin Powell in 2002. The contents, however, involved a sinister promise from former British Prime Minister Tony Blair regarding the Iraq War. So what does this mean for the Labour party, and what does this mean for a potential escalation of military action in Syria?

A significant part of the right’s argument against the Corbyn campaign in this year’s Labour leadership elections was based on the presumption that Tony Blair and co. had entered government in 1997 with a perfect political formula. They knew best, and they needed to be heard. And if Labour voters ignored their advice, they and their party would face oblivion.

The reality, however, was that Labour grew in popularity between 1983 and 1997 largely because citizens were sick of Tory rule (i.e. Thatcher’s divisive rhetoric, Black Wednesday, and general sleaziness). Although New Labour offered a slightly more compassionate alternative to the previous Conservative regimes, Alex Andreou describes how Blair’s policies were actually “deeply unpopular” while he was in government. As a result, Labour’s share of the vote steadily declined after 1997.

The biggest problem for New Labour, though, was its behaviour after 9/11. Its decision to invade Iraq alongside the USA, for example, saw a massive exodus of Labour party members. In fact, the party only survived the decline in membership to 1930s levels because the Conservatives and Liberal Democrats were so weak in comparison, and because the economy remained stable.

The recently released memos related to Tony Blair show just how manipulative the former prime minister could be. While he told the British public in 2002 that Britain was seeking to avoid military action in Iraq through diplomacy, for example, he also assured Colin Powell that he would stand alongside the USA if it did decide to go to war. He had also promised to send more troops to Afghanistan in spite of the fact that experts had warned him that the army was being “over-stretched”.

In fact, Blair had offered his “strategic, tactical and public affairs lines” in an attempt to “strengthen global support” for America’s future invasion of Iraq. A second memo, for example, showed that the Prime Minister had “used spies within the Labour party to help influence public opinion in favour of the war”. In a particularly worrying lack of interest in lessons from history, meanwhile, Blair expressed his certainty that overthrowing Saddam Hussein would “yield more regional success” – something the world has yet to see, to say the least.

The Invasion of Iraq

There were plenty of people on the progressive end of the political spectrum who fell for Blair’s rhetoric back at the start of the century, though. Their argument was that Iraqi citizens deserved to be liberated from Saddam Hussein’s oppressive rule. If we were to truly believe their interest in the welfare of ordinary Iraqis, however, we might expect them to have been well-versed in the country’s history.

For example, as Media Lens points out, the same powers that were now planning the Invasion of Iraq had previously “presided over the ‘genocidal’ sanctions regime” of the 1990s, which had resulted in the deaths of around 500,000 Iraqi children. They had also “supported Saddam during his worst killing” in the 1980s. And, worst of all, they had actually helped to plan and execute the bloody Ba’athist coup of February 1963.

Eventually, though, Britain went to war in Iraq, based on unproven claims about Saddam having weapons of mass destruction. A million Iraqis were killed as a result, and thousands of children would soon be born with horrible deformities and suffer a plague of cancers due to the Coalition’s use of white phosphorus and depleted uranium. At the same time, the context of resistance in Iraq fuelled the growth of discriminatory fundamentalists like the forerunners of Daesh.

In the end, the invasions of both Afghanistan and Iraq were effectively wars of choice, which saw many anti-war progressives turn away from New Labour. The exact extent of popular discontent, however, would only be seen after the global capitalist crisis of 2007-8, when Gordon Brown chose to defend the financial sector rather than the British people. Protest votes would largely go to the Lib Dems in 2010, and to the SNP and the Greens in 2015.

The anti-war Left retakes control of the Labour Party

While Western governments were busy waging and supporting violent conflicts abroad during the Cold War, Jeremy Corbyn was doing the opposite. He was organising “protests against nuclear weapons and the Vietnam War” and seeking to further socialist ideals of social justice and peace where he lived.

Then, as Tony Blair took Britain to war, Corbyn refused to support policies which went against the principles upon which he and other Labour MPs had been elected. Labour values had nothing to do with unjustified wars, and these nonconformists knew it.

Blair, however, continued to drag his party “to the point of no return”, as poet Richard Sudan has said. And, while the “ugly shadow of the Iraq war” effectively cut “right to the heart of Blair’s credibility”, Sudan insists, Corbyn and his dissenting colleagues remained unscathed.

Therefore, with the electoral loss of 2015 showing that New Labour’s abandonment of Labour values still ranked highly among many voters’ reasons for supporting other parties, it became clearer than ever that a break from the past was desperately needed. According to Eamonn McCann, the increased support for the SNP and the Green Party had come at least in part as a result of people’s “disgust at the lies which fell from the lips of New Labour”. The consistent anti-war opposition of the straight-talking Corbyn, then, made him the perfect candidate to win back the disillusioned voters who had walked away from the Labour Party.

Stopping the war in Syria

Tony Blair was not the only establishment politician fond of war, though. Conservative Defence Secretary Michael Fallon, for example, has recently argued there is “inescapable logic” for extending airstrikes into Syria. The UK’s coalition partners, he said, “would like us to take part but we don’t yet have parliamentary authority to do so”. The word “yet” is key. It suggests very clearly that the Tory regime has its eyes firmly set on getting permission to enter Syria militarily.

Furthermore, while Jeremy Corbyn is a strong opponent of military escalation, there are still a number of Labour MPs who support intervention in Syria. Shadow Foreign Secretary Hilary Benn, for instance, supports the government’s plans, in spite of the fact that the recent Labour Party conference opposed them.

As has been seen elsewhere at The Canary, there are a number of ways to stop the destruction and violence in Syria. We can step up our diplomatic and financial support for the progressive forces of Rojava rather than the anti-democratic regimes of Turkey and Iraqi Kurdistan. We can also encourage an agreement between regional and international powers in order to stop the destruction caused by the conflict in Syria.

As Corbyn has said, the Syrian people deserve freedom from both Assad’s nationalist regime and the fundamentalist rule of Daesh. And, while “there are no simplistic answers”, an increased campaign of bombing will only kill more people, do more infrastructural damage, and create more refugees. Therefore, in an incredibly complicated political context, all the forces in the region must reach an agreement through dialogue. Saudi Arabia, Qatar, Iran, and Turkey, which all deserve criticism in their own right, need to agree to stop the flow of arms and the purchase of oil. Then, they need to ensure that aid can reach the millions of people who have been displaced.

What we can and must learn from New Labour’s approach to international affairs during the Blair years is that war is never the best or only solution. It simply destroys, destroys, and destroys. For a lasting peace, constructive methods are needed. History has taught us that escalation leads only to greater devastation. Now, more than ever, is the time to learn from the past.

If you also believe military intervention is the wrong way to go in Syria, you can contact your MP to make your voice heard.