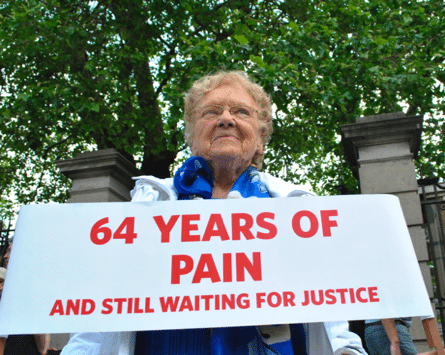 (TRIGGER WARNING: Please be aware that some of the details in the following story are very harrowing.)

The Republic of Ireland is in the midst of an ongoing medical scandal that its Government clearly would like to pretend is just not happening. For much of the twentieth century, perceived medical wisdom in Ireland dictated that the ideal method of bypassing complications in childbirth was a ‘symphysiotomy‘. An alternative to a caesarian section, a symphysiotomy is the practice of cutting the pelvic bone of the mother in half using a saw, to widen the birth-canal and allow a smoother passage out of the womb for the baby. However, even with the best of anaesthetic treatments beforehand, it would also cause agonising pain, while having disabling side-effects, from which the mother was unlikely ever to recover.

For most of the Irish Republic’s history since achieving complete independence from the British Crown in 1949, the shape of its laws was heavily influenced by the Roman Catholic Church. This included medical practices, and one of the attitudes of Catholicism towards childbirth is that women, in wedlock, should perform the ‘duty’ frequently.

Whereas C-sections tend to limit the number of subsequent pregnancies the mother can bring to term, symphysiotomies are generally thought by obstetricians to have little effect on the prospects of women giving birth again in the future, and might even improve prospects by permanently enlarging the pelvis. There was also a fear that C-sections would frighten the wider public, and encourage women to use contraception, which the Church also opposed, and was formally illegal in the Irish Republic. Thus the Church preferred symphysiotomies, meaning the Irish medical profession preferred them as well, while the opinions of women undergoing the procedure were overlooked with callous dismissiveness.

According to the campaign group, Survivors Of Symphysiotomy (SOS), between 1940 and 1984, approximately 1,500 women and girls in the Republic of Ireland, some as young as 14, underwent the procedure. Worse though is a pattern that repeats itself to a frightening extent throughout their reported experiences; most of the victims assert that they were not consulted about the operation beforehand, and many were not even informed precisely what the doctors were doing to them.

Descriptions of what some of the women experienced are truly gruesome, so vivid that they sound like they belong in the strictly-fictitious world of a Wes Craven movie. One woman, identified as ‘Cora’, was 17 when she gave birth to her first child in 1972, and these were her terrifying recollections; –

I was screaming. “It’s not working, [the anaesthetic],” I said, “I can feel everything …” I seen [sic] him go and take out a proper hacksaw, like a wood saw … a half-circle with a straight blade and a handle… The blood shot up to the ceiling, up onto his glasses, all over the nurses… Then he goes to the table, and gets something like a solder iron and puts it on me, and stopped the bleeding. … They told me to push [the baby girl] out. She must have been out before they burnt me. He put the two bones together, there was a burning pain. I [felt] I was going to die.

Horrifying though the above description may be, there are echoes of Cora’s experience in the testimonies of other victims, and that alone should make us confident that she is telling nothing but the truth. Accounts from other women of enduring the horror of the operation speak repeatedly of being put under restraint, of screaming and writhing in agony, and of being kept in the dark as to what was being done to them until it was already a fait accompli.

Symphysiotomies are so rare in the rest of the developed world that there are some medical experts who have never even heard of them – just ask Laurence Lee of Al Jazeera, who investigated the scandal last year and was startled to find some doctors in the United Kingdom were not aware of the operation. But it is entirely correct that the operation is little-used, as there has been no need for it since at least the 1930s, by which time the practice of C-sections had been so mastered by the medical profession that they had arguably ceased to be dangerous. Whether C-sections were safe or not, it was plainly a violation of the Hippocratic Oath – particularly the requirement for warmth, sympathy and understanding – that symphysiotomies were performed without patient consent.

In 2013, Professor Oonagh Walsh of Glasgow Caledonian University published a report into the practice of symphysiotomy in Irish hospitals between 1944 and 1984. She found that the operation did indeed have terrible, often permanent, consequences for the victims:

many women who underwent symphysiotomies have had their lives substantially impaired as a result… There is a large range of impairment within the cohort [of survivors], from no adverse effects, to significant disability, incontinence, mobility problems and chronic pain.

Among Professor Walsh’s recommendations, she called for formal public apologies by all institutions involved in the practice. In that, she is joined by SOS, who want apologies from the Irish Government itself.

Late last year, the Government proposed a redress scheme promising compensation money for all surviving victims. But the proposal was couched in such guarded terms that over 80% of the survivors rejected the scheme. In particular, they were unhappy that, as chairperson Marie O’Connor put it, “the scheme has no admission of wrong-doing”, which was the single most important requirement. It further contained provisos that seemed designed to absolve an awful lot of people who should arguably have been firmly implicated in the scandal. In accepting the compensation scheme, the victims would have to sign a binding document indemnifying a wide range of key medical and legal figures, guaranteeing that they would never take legal action against them. The amount of compensation offered, ranging between just €50 and €150,000 (most of the victims so far have been offered sums closer to the former than the latter), looks tight-fisted enough, but many applicants have been turned down anyway. The matter has now been referred to the United Nations Human Rights Council, and a full review of the scandal is scheduled for next year.

The Irish Government’s conduct reeks of gesturism, aimed at putting the story away as quietly as possible, perhaps before more ugly details about it can be unearthed; the discovery last year of thousands of documents outlining symphysiotomies that had apparently been kept secret from previous investigations is an example. But the grudging Government behaviour is just the continuation of a wider story of what has happened to these women over the last seventy years. The Church and the medical profession, and probably the Irish Government too, showed little recognition of women as people in their own right. Instead, their actions suggest a view of women as society’s ‘baby-making machines’, which can lead to the belief that it is better if women risk permanent disability but have a fully-functioning cervix, than if she risk damaging the cervix but otherwise remain in good health.

That mindset is literally medieval, and while we can be (fairly) confident that symphysiotomies are no longer carried out in Ireland, it remains deeply disturbing that the Government is still not averse enough to the idea of them to take actual ownership of that history, and give real justice to its victims.