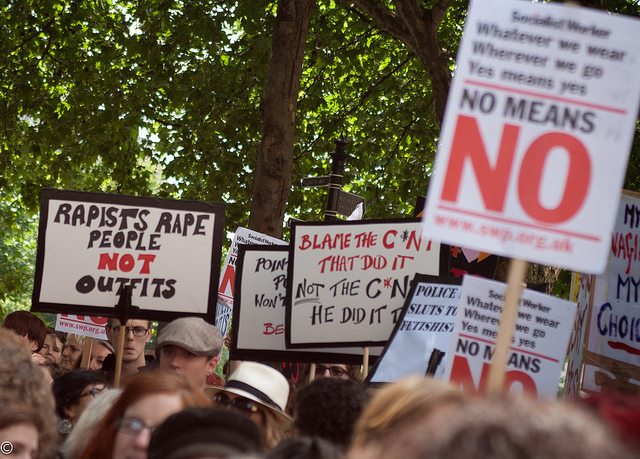 Recently a Warwick University student, George Lawlor, refused to attend classes on sexual consent set up by his university’s Union, sparking debate about the usefulness of the classes.

In a response on the university’s Tab website, he described the Facebook invitation to attend as “a massive, painful, bitchy slap in the face”, and claims that “the overwhelming majority” of people know what consent is. He also states the classes are useless, as ‘real’ rapists won’t attend. He writes:

do you really think the kind of people who lacks empathy, respect and human decency to the point where they’d violate someone’s body is really going to turn up to a consent lesson on a university campus? They won’t.

His reasoning is heavily misguided.

The classes offered by the National Union of Students (NUS) are an attempt to address the fact that in the UK one out of three women are sexually assaulted on university campuses. In America, one in five female students reports being sexually assaulted.

The aim of classes is first of all to fill an ‘educational gap’. Consent is typically missing from sexual education. People learn about STIs, STDs, and contraception from a teacher, family member or doctor. But the issue of consent, which is central to the practice of healthy sex and sexuality, is usually not touched upon. As observed in Everyday Feminism:

Understanding consent should be straightforward. The UK government’s webpage This is Abuse defines consent as:

someone giving permission or agreeing to something, after they have thought carefully about whether or not they want to do something.

However, consent classes are born out of the realization that people don’t have a clear-cut idea about what consent means. Evidence backs this up – a shocking study surveying 86 male college students in the US found that 31.7 percent of men said they would act on “intentions to force a woman to sexual intercourse” if they could get away with it, but just 13.6 percent said they had “intentions to rape a woman” if there weren’t any consequences. Classes are also aimed at disbanding a series of damaging myths, or “blurred lines” and perceived “grey areas” which normalise assault.

One myth is that put forward by the student in question – in his article’s photo, he holds a sign that says “This is not what a rapist looks like”. However – there is no one thing a rapist looks like. Rapists are not strangers or ‘monsters’ – most victims of sexual assault are likely to know their perpetrator. In the US, it is estimated that about 73% of victims are familiar with their perpetrators. This kind of thinking, it is argued, risks promoting disbelief of victims of rape by ‘respectable’ assailants.

Finally, the idea that only rapists need to be taught about consent is flawed. Consent courses cover legal aspects of consent as well as social situations and general sexuality education. The more educated people are about issues of sexual assault and rape, the less acceptable it becomes. Evidence collected by the Centre for Research on Violence Against Women found that 26 high schools where students were taught what rape is and how rapists operate experienced a 50% reduction of sexual assault and 40% reduction in sexual harassment, stalking and dating violence.
As put by Jessica Valenti:

what classes on consent can absolutely do is give people the tools they need to weed rapists out of their communities – to make abusers easier to pick out, and victims easier to help.