Another Doctors Without Borders hospital is destroyed, this time by Saudi Arabia - Canary 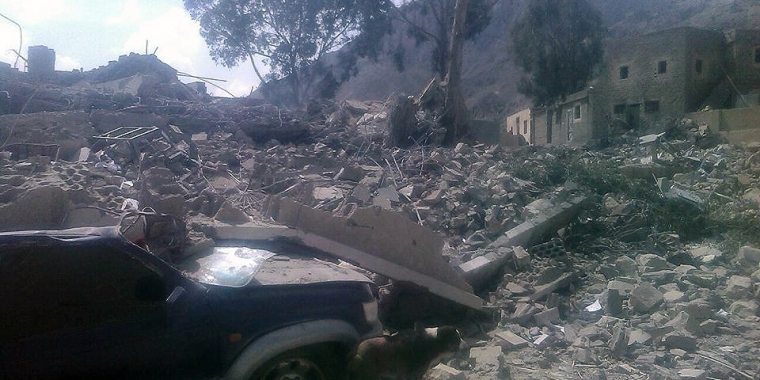 A military atrocity in Afghanistan earlier this month has now been duplicated in Yemen.

As reported in The Canary earlier this month, the United States Air Force destroyed a hospital in the Afghan city of Kunduz on 3 October. The hospital was owned and run by the charity Médecins Sans Frontières (MSF), also known as Doctors Without Borders. There have been weeks of angry argument between the organisation and the US military since then over inconsistent American explanations for the attack, and MSF have demanded that the attack be investigated by authorities completely independent of the USA. (The death toll from that attack has recently risen to 30.)

As though to prove that lightning really does strike twice, albeit from different clouds, news has broken today of another MSF hospital that has been destroyed by coalition airstrikes. The latest hospital to be targeted was not in Afghanistan, but in another war-torn (and far more overlooked) country – Yemen. The attack, in the province of Saada near the border with Saudi Arabia, took the form of a series of airstrikes minutes apart, similar to the pattern in Kunduz. The first occurred around 10:30pm local time yesterday, or 7:30pm UK time. The attacking air force was not from the USA on this occasion, but was instead from one of the USA’s (and Britain’s) dearest allies, Saudi Arabia.

Roughly 24 hours on, precise details of the carnage are still somewhat sketchy. According to MSF’s website, the initial strike led to an immediate evacuation before subsequent attacks destroyed the complex almost entirely. At the time of writing, no deaths have been discovered, for which we can be cautiously thankful, but the devastation has implications beyond who was in the hospital at the time. The building was the only life-saving medical facility in the Haydan District, and was thus a critical medical resource in a time of war for some 200,000 people, who are now effectively cut adrift. During the five months since MSF started supporting the hospital, it has treated over 3,400 patients. That is well over 200 war-wounded people every single day. With the conflict showing no signs of letting up – indeed recent indicators have been that the violence has been getting more intense – the stream of injured and suffering people is not just going to dry up. So where are they going to go for treatment now?

Brigadier General Ahmed Asseri of the Arab coalition has denied the attack had anything to do with his forces, but MSF seem quite sure of their facts. Their director at the hospital, Hassan Boucenine, has gone on record as to how the facility may have been targeted:

It could be a mistake, but the fact of the matter is it’s a war crime… There’s no reason to target a hospital. We provided [the Arab coalition] with all of our GPS co-ordinates about two weeks ago.

That last detail again has worryingly familiar echoes of the Kunduz attack, which happened days after MSF had provided US intelligence with the hospital’s coordinates.

Boucenine has stated that all that remains of the facility are the staffroom and the x-ray department. His colleague Miriam Czech, MSF’s project co-ordinator for Saada, has corroborated this:

I can confirm that the facility is 99% destroyed.

That two such similar atrocities have befallen MSF in the space of a little over three weeks might sound suspicious, but we should not be irrational about that. The sheer savagery of the fighting in Yemen, including frequent and shameless attacks on civilians by forces on both sides, suggests that strikes on hospitals should come as no surprise. Indeed, the Saada hospital is understood to be the 39th different health centre to be attacked in Yemen since March.

Even in this desperate context, MSF’s demands for an independent investigation into the forces that have committed violent crimes against its people and facilities must now surely be upheld. It is the very minimum to which MSF is entitled. In any context, last night’s attack seems a pointless and unashamed act of terror, and appears to have been carried out by a country the West obstinately persists in calling an ally. The House of al-Saud is one of the most repressive regimes on Earth, as anti-democratic as any government in the Middle East, and barbarically cruel in the way it rules its civilians. And with this apparent attack on a hospital, it has also presented ample evidence that it is a terrorist state.

And yet the USA and Britain treat Saudi Arabia as a beloved ally, even in The War on Terror. Only in the last few weeks, the British Government has been cosying up to the Saudi regime again, over a contract to build a prison and over the sale of military aircraft – the very types of aircraft used last night of course. That is an overlap that would implicate the British and Americans in yesterday’s atrocity, and so add to the debt they owe to MSF.

One might ask at this point why the mainstream media got into such a spin about Jeremy Corbyn addressing delegates of Hamas as ‘friends’ in the distant past but have no reservations about the prime minister arming a regime that tortures its citizens and apparently drops bombs on hospitals right up to the present day.

But then, with the USA doing much the same thing three weeks ago, it is probably easier for the mainstream media to carry on doing what they have been doing all along, and try to avoid talking about it too much at all.