Osborne plans to take £2,000 a year from soldiers to give the rich a tax cut - Canary 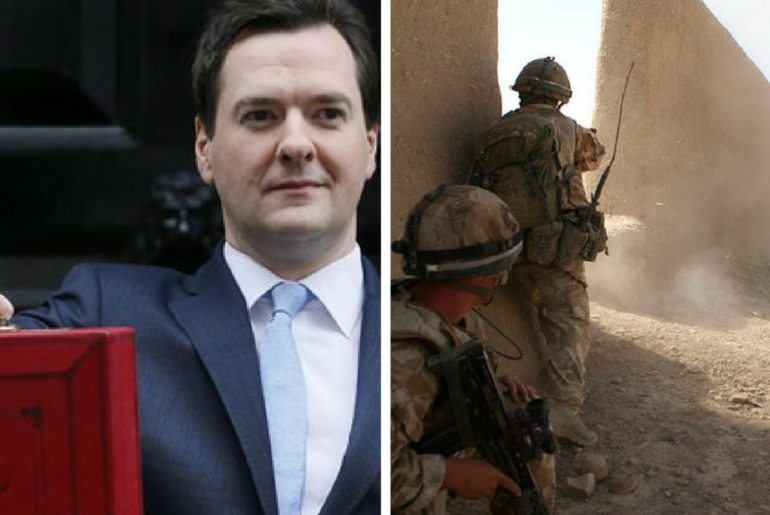 Chancellor George Osborne is cutting three major taxes for the richest in society, and he is paying for it by cutting tax credits for the lowest earning working people, including 28,000 members of the armed forces.

Although Osborne’s ideological cuts to tax credits were defeated, David Cameron has been unwilling to confirm that nobody will be worse off come April next year. Recent figures suggest that even the armed forces will take a significant cut, with a level one private with two children earning slightly more than £18,000 set to lose more than £2,000 a year.

These unfair tax credit cuts are set to hit military families hard and mean the Tories are letting our soldiers down. David Cameron and George Osborne can’t just fiddle round the edges of this disastrous policy. Instead they need to think again and completely reverse these cuts that are due to hit families next April.

I ask a question from Kieran, a veteran of the first Gulf War who is set to lose out. He writes ‘it is a worry to the family, there is fear and trepidation about whether we are going to be able to get by’.

He asks ‘is this how the Government treats veterans of the armed services?’

Cameron responded that the government has provided help to people like Kieran. He also said that Kieran would have to wait three weeks to discover whether he will be affected. He then went on to use his favourite tactic – the personal attack on Corbyn:

“a serving soldier wouldn’t have a job if you ever got anywhere near power.”

A party for the rich

While soldiers face losing thousands of pounds a year in cuts to tax credits, the Tories have provided as much support as possible to their rich friends.

The top rate of tax was 50p under Labour, but Osborne cut this to 45p – letting the highest earners take home more while the poorest felt the full force of austerity. At the time, it was suggested that this would cost £3bn a year, rising to £4bn.

The UK already has the lowest corporation tax in the G20 at 20%. By 2020, it will fall to 18%. This means that rich corporations, whose low wages often force people onto tax credits, have received a huge boost while working people, including those fighting for the country, will receive a massive cut to their income. This has cost the UK £6.6bn.

Osborne has also cut inheritance tax for the richest 10% of people in the UK. The Tories want to cut support to those who are working, while allowing the richest people in society to inherit huge wealth. This policy will cost almost £1bn by the end of this parliament.

These figures show that the £12bn required in welfare savings could have been avoided – if it wasn’t for Osborne’s desire to see the richest in society thrive, literally at the expense of everyone else.