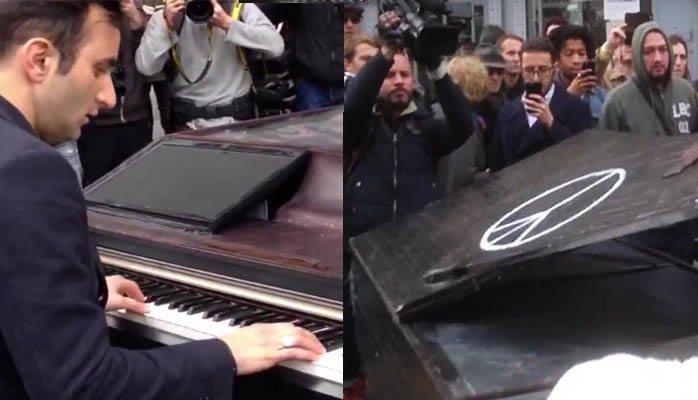 On the morning after the devastating attacks in Paris that left 129 dead and over 80 others seriously injured, a man played John Lennon’s “Imagine” on a mobile piano outside the Bataclan Theatre, where gunmen had opened fire during a rock concert before detonating their explosive vests.

Evidence of the previous night’s carnage could still be seen. The police had placed a cordon around the Bataclan, where press and onlookers milled about trying to come to terms with the recent events.

Suddenly, the sound of music was heard, providing a focus for the grief, and pain. The choice of song, a reminder that another world is possible.

We do not know who this man is. The decision to play seems to have been a simple, and near spontaneous response to overwhelming circumstances.

The musician arrived on a bike, played the song in front of stunned crowds and then became overwhelmed with emotion as he left.

His emotional and heartfelt gesture sits in stark contrast to President François Hollande’s retaliatory rhetoric, promising to “lead a war which will be pitiless” against IS, who claim responsibility for the attacks.

The French government was the first to bring airstrikes against IS, and they have been more active in their bombing campaigns than the other western governments. At the time Hollande cited ‘self-defence‘ as a justification.

IS also frames its violence as an act of retaliation, one of the gunmen at Bataclan was heard to say:

The only solution that Hollande has to offer, a further act of revenge, will only lock us all deeper into a cycle of devastation. His intention to escalate rather than withdraw is at best short-sighted, at worst a calculated decision that he knows will win him popularity in the wake of the crises. 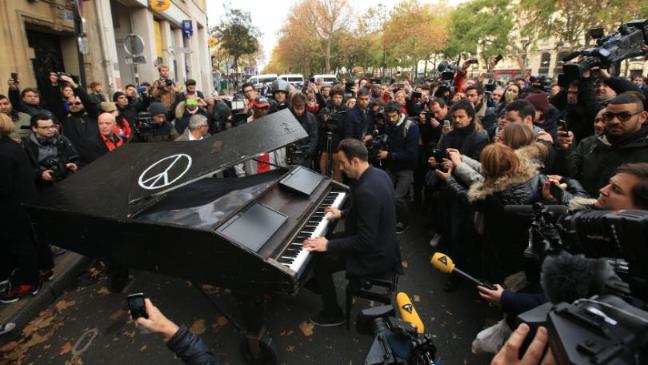 The poignant act of this musician, to play a song about peace,  about a world of no countries, no religions, a “brotherhood of man”, is a plea to both sides to look at the madness that they are unleashing on the world, not to think in terms of who is the aggressor and who the victim. We need to set aside the rigid identities that lead us to value the lives of some highly, and others not at all.

Bomb strikes on Syria have not just hit IS targets but innocent civilians, men, women and children. A full-scale invasion will no doubt have an even greater human cost. And if we can expect each escalation of aggression to meet with further retaliation, then warmongering on the part of French, British and American politicians doesn’t make us any safer, it only puts us more at risk.

Daesh is an organisation born of war, thriving on conflict with the West. Each new confrontation brings it new recruits, supplies and allies. Let us heed the wise words of incarcerated whistle-blower Chelsea Manning, who says that without an enemy to fight, IS will ‘fall on its own sword.’

Caught between Islamic State, Al Qaeda and Western governments, Putin’s regime and Assad’s, are the billions of innocent people who don’t want any part in this conflict. Some of them are Syrians who have left their homes because ‘the water is safer than the land‘. Millions are French Muslims and British Muslims, who now will be living in fear of retaliation and persecution, watching anxiously for signs of extremism amongst their youth. And many millions are the dreamers of Lennon’s “Imagine”, who want peace and believe it can be attained.