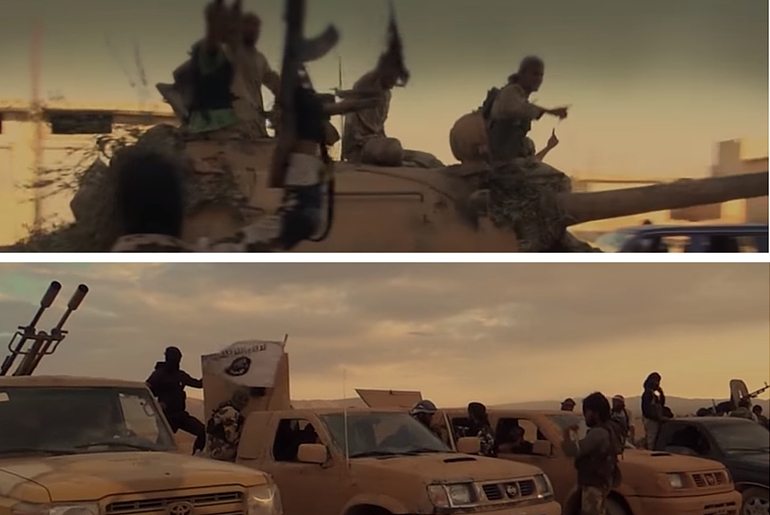 The devastating attacks on Paris on 13 November have shocked and scared the Western world; there is a greater desire than ever before to see the destruction of the zealous so-called Islamic State (Isis). This has led to the French state dropping 20 bombs on the Isis stronghold, Raqqa, the largest attack by the French during the current engagement in Syria.

But in order to defeat the fanatical terrorist army of Isis, is dropping bombs really the answer? Labour leader, Jeremy Corbyn, thinks not. He says that:

we have to be careful, one war does not necessarily bring about peace, it often can bring yet more conflict, more mayhem, more loss.

Although the wish to see the terrorists bombed and destroyed is an understandable reaction, it is far easier to say than to do. And the leaders in the Western world continuously fail to learn the valuable lessons of the past.

When the Soviet Union invaded Afghanistan in 1979, the USA supported (through training and funding) the Mujahideen forces defending the country. Some of these funds reached Islamist groups, including one founded by the current al-Qaida leader, Ayman al-Zawahiri. This proved disastrous as human rights-abusing militias started to become the dominant force in Afghanistan. One group that rose as the Soviet Union left was the Taliban; largely supported by the Pakistani military, the Taliban was able to take territory and, in 1996, became the government of Afghanistan.

In 2001, a US-led coalition invaded Afghanistan, in order, ostensibly, to apprehend Osama Bin-Laden, who was assumed to be behind the destruction of the World Trade Centre in New York on 11 September 2001. The Taliban had been protecting members of al-Qaida, including bin-Laden himself, so the coalition brought down the Afghan government and sent its surviving members into hiding in the wilderness backwaters of the country. Thereafter, the stated aim of the coalition became to reconstruct a nation that had been torn apart by repeated wars and repressed by extremism.

While the US-led forces were able to weaken the Taliban, its leaders were always aware that, while they may not hold as much territory as before, time was on their side. They were going nowhere, and the US would have to withdraw sooner or later. As the war progressed, coalition soldiers were being sent home in coffins, as the Taliban re-emerged as a strong insurgent force. When it was announced in 2012 that troops would return home from the conflict in Afghanistan the following year, the Taliban rejoiced. They had been waiting for this moment.

The departure of the US-led coalition troops meant that the Taliban could grow once more. In September 2015, they retook control of a provincial capital, the first the faction had held since 2001. Now, Isis has spread into Afghanistan. Rather than democracy and liberty challenging the Taliban, as the US neoconservatives had imagined, the only challenge has come from another army of violent extremists.

One Mistake After Another

The coalition started the Iraq war in 2003 with the aim of destroying the Ba’athist regime of Saddam Hussein, under the pretext that it had links with al-Qaida and ‘possessed weapons of mass destruction’. Neither claim proved to be true. Again, it was a US-led invasion, and again, it made a number of serious mistakes, one of the biggest of which was the decision to disband the surviving remnants of the defeated Iraqi army.

This meant, at a time of deep insecurity and political instability within the fallen country, large numbers of Sunni soldiers and officers had been made unemployed and were dispossessed. Therefore, many angry men, who knew how to use weapons and where to procure them, wanted to join the insurgency against those who had removed the Ba’athist Sunnis from power – the Western forces. By dispossessing the army, the occupiers had given its membership no stake in the new state, and every incentive to see the old order restored. The removal and eventual execution of Saddam meant that there was a power vacuum in an ethnically-plural country that was now almost ungovernable as its different ethnic groups turned against each other. The Salafist group, ‘al-Qaida-in-Iraq’ (AQI), which in 2013 would become the ‘hub’ of the Isis army, was a key militia in trying to fill this vacuum.

Weakened Iraqi security meant that the only people who could defend Iraq were the US-led coalition forces themselves, and they frequently had to cope with a shortage of troops. The US withdrew its forces when al-Qaida-in-Iraq had been weakened drastically. But, as with the Taliban, time was on AQI’s side.

The Rise of Isis

The US supported the election of Nouri al-Maliki as Iraq’s prime minister. But Maliki in office proved to be increasingly sectarian, anti-democratic, and even draconian, in his style of government.

Much like in other areas of the Middle East, protests against corruption within Iraq emerged in February 2011. Like the reaction from most dictators in the Middle East, Maliki’s regime responded by declaring that all protesters were terrorists and used brute force to put them down. Many were killed, thousands were arrested and tortured. He lost the 2010 election but went against the constitution to remain in power.

The Sunni community that had been marginalised and repressed by the Iraqi prime minister wanted protection. The weakened militias, including AQI, had started to organise, and ISIS emerged as a faction that would supposedly fight Shi’a oppression, calling all Sunnis to rally to its banner.

Isis was able to recruit people – many angry, unemployed, and fearing for their lives – and took over Mosul as the weak security forces were unable and unwilling to deal with the threat.

Learning From Past Mistakes

Since June 2014, another US-led coalition has been fighting Isis, principally by using air-strikes against its army.

However, Isis has consolidated its grip on much of its territory, and is still able to stoke fear around the world through surprise terrorist attacks like those we saw in Paris.

Who is funding Isis, who is arming Turkey, who is providing safe havens for Isis? You have to ask questions about the arms everyone has sold in the region.

Corbyn is alluding to the fact that citizens from Gulf states have been funding Isis. Also, Saudi Arabia’s ideology, Wahhabism, has inspired a wide variety of militant groups in the region, including Isis itself. Professor Paul Stevens argues:

for a long time, there was an unwritten agreement … whereby al-Qaida’s presence was tolerated in Saudi Arabia, but don’t piss inside the tent, piss outside.

Turkey has also been accused of helping Isis, through supplying intelligence or through sheer inaction. The Turkish state considers the Kurdish Peshmerga a bigger threat than Isis, and may even be secretly siding with Isis due to its anti-Kurdish policies.

Maybe, it is time to shift our focus onto our allies within the region. The West must support the region, but it cannot lead interventions, as every attempt has catastrophically backfired. So when Corbyn says that there would be:

it is not just a ‘trendy rant’ from the Left. Instead, it is a mature acknowledgement of the lessons of recent history, and how bombing countries only strengthens the ability of extremist groups to recruit. The ‘war on terror’ has been in action since 2001. The West has been fighting Isis and its affiliates since 2003, and yet the threat from these groups is increasing, not diminishing, and the usual leader-figure nations of the coalition, the US and the UK, show no sign of knowing how to reverse that pattern.