The Daily Mail team are not known for their journalist ethics and measured response to crisis, but today’s attack on refugees is a low point, even for them.

Stanley McMurty, who goes by the pen name ‘Mac’, has produced a chillingly racist cartoon for the Mail – which depicts refugees as marauding soldiers, running into Europe alongside rats. The implication being, they are one and the same.

The shadowy, caricatured features, the suggestion of vermin-like character – this all seems very reminiscent of the sort of propaganda we have seen from some of the worst regimes in history. As one Twitter user pointed out.

While we’re at it, how did the Daily Mail treat Jewish refugees of the Nazi holocaust at the time? In 1938, as the Jewish population of Germany began fleeing Hitler, this was the welcome they received from the Daily Mail. 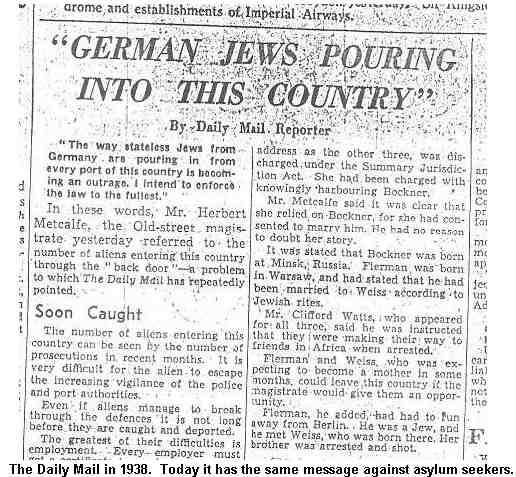 Not only did the Daily Mail propagandize against the incoming Jewish families, but they spent years cheerleading for fascism in general, and Hitler in particular. In 1934, the paper’s owner Viscount Rothermere wrote an editorial personally inviting Britons to embrace both.

The Daily Mail was wrong in 1934, wrong in 1938, and it is wrong today. One would have hoped that in the near century between the mistakes of the 1930’s, and today, the owners, editors and writers at the Daily Mail would have evolved. But sadly, they haven’t. Worse, neither have their readers.

The average daily readership of the Mail sank by over 4.6% last year. That’s great news for journalism, and even better news for informed democracy. However, 1.6 million people are still waking up and buying this paper, every day.

It’s the same story at The Sun, where Katie Hopkins invoked the same Nazi-era references, with this piece. 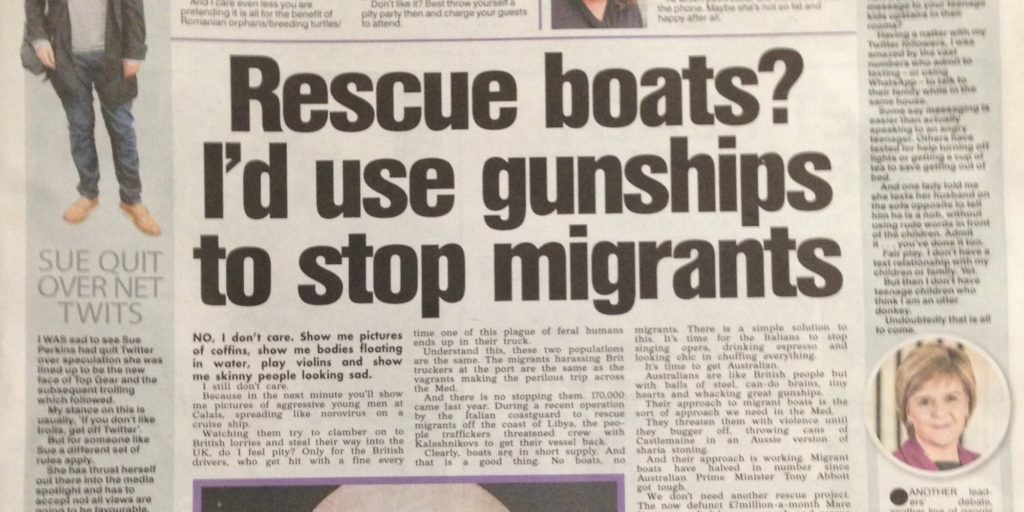 A short time later, Hopkins got her wish, when the body of Syrian toddler Aylan Kurdi washed up on the shores of Turkey. And no, she didn’t care then either.

The authors of such vile narratives should be facing charges of incitement. Hate crimes against the Muslim population are rising astronomically, not solely because of terror attacks by radical fundamentalists, but because people like McMurty and Hopkins have issued a blood libel against all Muslims, and against all refugees. Thanks to the constant stream of misinformation, people are literally convinced that Muslims are taking over Britain. In fact, more than 200,000 people have signed a petition calling on Britain’s borders to be closed to defend from this ‘invasion.’

The reality is that far from being held to account, cartoonist McMurty has actually been honored with an MBE from the Queen, for “services to the newspaper industry.”

Over 4.1 million refugees have fled the violence in Syria. Think about how traumatised France is after the attacks on Paris – now imagine such attacks were happening every day, for several years. Then you can begin to imagine the level of trauma amongst the refugees that are lining the shores of Europe. The refugees are fleeing the very people that just brought Paris such grief. Not only has that darkness followed them here, but cynical and bigoted people are actually blaming them for it.

There needs to be a zero tolerance policy towards behaviour which endangers human life, and those who seek to radicalise the population against a community on religious or racial grounds. If that’s true for ‘mad mullahs’, it should be true for media magnates and their journalists.

Britain, we are better than this. Let’s prove it by putting our compassion and our dignity on loudspeaker, rather than our fear and prejudice.