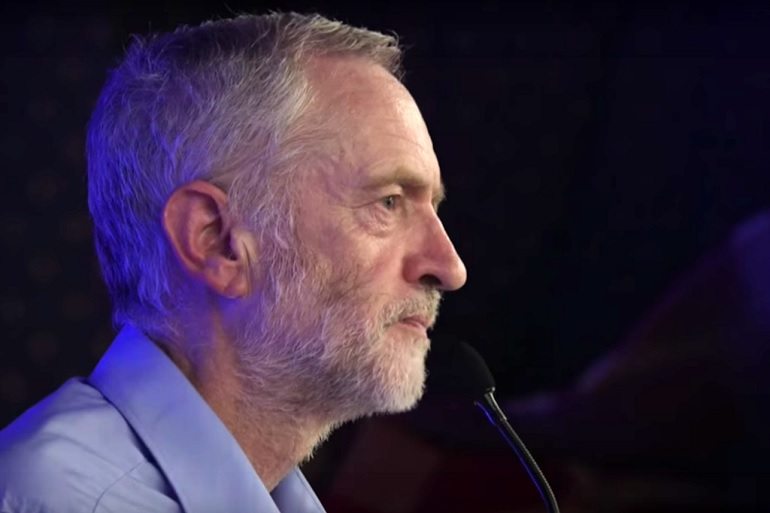 Attacks launched by Daesh (Isis/Isil) around the world are horrific. And for peace to come to the Middle East, this group must be defeated. British prime minister David Cameron and his Labour opponent Jeremy Corbyn both agree about this. So why is the Labour leader facing the brunt of criticism?

Cameron remains committed to military intervention in Syria, suggesting he would push ahead with air strikes even if the British public objected – which it seems they do.

On the other hand, Corbyn has argued (as has The Canary) that a bombing campaign in Syria is neither a good idea nor the solution to the appalling political violence of Daesh and its supporters.

And the Labour leader’s “clear principles”, argues The Independent‘s Liam Young, are a breath of fresh air compared with Cameron’s simplistic warmongering. In fact, says Young, they make him:

the total opposite of Cameron’s hot air.

But why isn’t everyone so happy with Corbyn’s stance?

and rather than forcing his opinions on other Labour MPs regarding Syria or allowing them to vote as they wish on potential air strikes, Corbyn has made it clear that Labour will “come to a position as a party” on the issue.

But not all Labour MPs are happy with that stance.

According to Ben Glaze at The Mirror, one shadow minister called the Labour leader a “f****** disgrace” on 16 November, for his commitment to the rule of law and opposition to extrajudicial executions. Corbyn has consistently insisted he would

only authorise actions that are legal under international law.

And a big part of this stance comes from having lived through the quagmire caused by the 2003 invasion of Iraq.

The Independent‘s Matthew Norman explains one of the reasons why some of Corbyn’s colleagues have not been very happy with his rhetoric in recent days. In his view, there is a need for politicians to exhibit “visceral revulsion” in the wake of terrorist attacks rather than having a calm and reasoned demeanour. In his opinion:

to get people to listen to intelligent things in times which demand ritual stupidity, a would-be national leader must first capture the mood of the nation…

In other words, Corbyn’s response has not been as “colourful” as some might have wanted.

Western governments silent about the Saudi mentors of Daesh

So why has Corbyn continued to insist on a comprehensive, measured strategy to defeat Daesh?

According to former MI6 agent Alastair Crooke, we cannot ignore the role of Wahhabism – the state ideology of Saudi Arabia – when talking about Daesh.

a crucial way to help defeat ISIL is to cut off its funding, its supply of arms, and its trade.

And he has made it clear that dealing with Saudi Arabia would a big part of this process:

Saudi Arabia, maybe not at Government level, but certainly at aid-level, has been providing support to Isil.

David Cameron, however, avoids talking about Saudi Arabia, consistently trying to create distractions from the issue and convince Britain that military escalation is a necessity – against expert advice.

The facts speak for themselves, though.

The Independent‘s Robert Fisk writes about how, according to the UN, Saudi air strikes in Yemen in recent months have killed 2,355 civilians. Meanwhile, he says, the Middle East is full of

dictators, kings and emirs – almost all of them the West’s allies – [who] regularly spy on their citizens… and torture their own people…

However, Western governments keep their mouths shut about the state terrorism carried out by Saudi leaders because of their reliance on the country’s oil resources. The French regime may now claim to be “at war” with Daesh, says Fisk, but the group’s “spiritual mentors” in Saudi Arabia “will be left untouched” because of France’s

lucrative arms deals with Saudi Arabia, where Hollande still hopes… to supplant the US as the kingdom’s main arms supplier.

Cameron and co. love to oversimplify

According to Matthew Norman:

And David Cameron is no exception, aggradising Daesh by comparing them to the Nazis and

conflating the menace of sporadic terrorism, however uniquely brutal, with an existential threat to British democracy.

Stating his “firm conviction” in favour of military intervention in Syria, Cameron has called the Daesh capital of Raqqa “the head of the snake”, suggesting that cutting this off would somehow immobilise an entire ideology which has followers around the world and is promoted globally by Western allies like Saudi Arabia and Qatar.

The prime minister has also spoken about how Daesh

operates across the border in Syria – a border that is meaningless to it.

No mention, though, of how NATO member Turkey has long kept the Syrian border open for Daesh and other Wahhabi extremists, whilst imposing an embargo on the secular, democratic regions of Rojava in northern Syria.

In other words, Western leaders like Cameron repeat simplistic arguments primarily because more detailed ones would incriminate them as collaborators in the rise of Daesh.

To solve a complex problem, we need an intelligent, balanced solution

Cameron and other cheerleaders for military escalation in Syria cannot escape from the truth. They tend to claim moral superiority (much like almost half of right-wingers in Britain do), but Canadian academics have stressed that “socially conservative right-wing ideologies” are usually most popular among “individuals with lower cognitive abilities”.

And according to award-winning psychological science journalist Wray Herbert:

Intelligence and thinking determine how people assess threats in the world. Those with lower ability – reasoning skills, processing speed, and so forth – prefer simple and predictable answers, because that is what they are capable of processing. Any uncertainty is threatening, and they respond to such threats by trying to preserve what is familiar and safe, the status quo.

In other words, the “simple and predictable answers” of David Cameron and the right-wing of the Labour party are pandering to the natural instincts of citizens who know very little about how Daesh has come into being and what the best ways are to defeat it.

This simplicity may indeed help people to “reduce anxiety” in complicated situations, but it is not a characteristic we should expect of those in government, and it is not an approach that will defeat Daesh.

Only reasoned arguments based on evidence and thorough investigation can give the world solutions to the complex problems we all face. And those who champion a simplistic and misleading discussion of issues must be challenged at every possible point. The future of the world depends on it.