Turkey fans booed during minute's silence for Paris victims, but they may have had a valid point - Canary 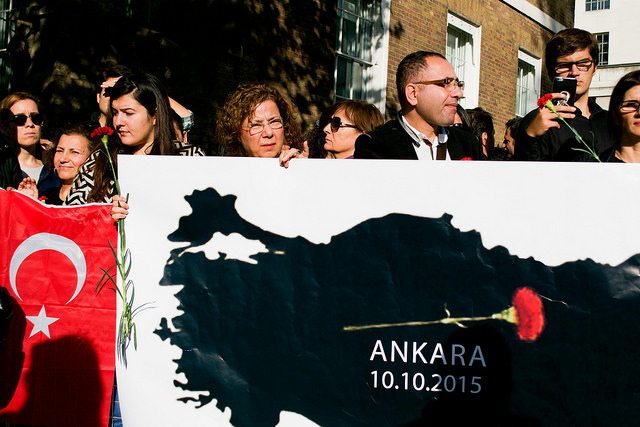 Turkey fans booed during a minute’s silence for victims of the Paris attacks ahead of their country’s friendly against Greece on Tuesday.

The story was reported in much of the mainstream press. It was also claimed that chants of ‘Allahu Akbar ‘ – the Muslim chant of ‘God is Great’ – could be heard from the crowd.

However, the booing may not be what it seemed. The Turkey fans may have been expressing a certain amount of righteous indignation, due to a lack of similar respect being shown for more than a hundred Turkish people killed in last month’s Ankara bombings.

According to comments on social media, reported by The Independent, the Turkish fans were not expressing disrespect for the 129 victims of the Paris attacks. They were acknowledging the hypocrisy of holding a minute’s silence for one terrorist attack whilst ignoring other, equally devastating ones:

it was response of injustice, they didn’t boo minute’s silence for paris attack victims. The millions of ppl dying in turkey cause of terrorist attacks, where were you when more than 100 people killed in ankara ?

It’s because of double standards, few weeks ago there was an attack in Ankara and more than hundred where dead in a ” peace protest” yet nobody cared or gave minute silence for them. So they decided not to give something they didn’t get, although you don’t fix a mistake with another one but that’s how it went. Mistakes happen.

They were upset because there were mass killing by ISIL and Kurdish army and lots of deaths in turkey and no country or football team or fans in Europe stood a silence minute for their victims.

Other commentators pointed out that reported chants of ‘Allahu Akbar’ – intimating that supporters were sympathetic to ISIS – were actually chants of solidarity with Turkish victims of terrorism.

Actually, they’re chanting “Sehitler olmez, vatan bolunmez.” Which means “Martyrs never die, the nation won’t be divided.” This is a common slogan thrown in remembrance of Turkish soldiers who fell victim to terrorism. In Turkey, there is rarely a minute of silence that isn’t interrupted by this chant. Whether its a minute of silence for a Turkish catastrophe, or something else that happened globally, this always happens.

And others put the hypocrisy in a wider context of regular killings in the Middle East.

No one makes a minute of silence for all the victims i middle east. 150 deaths is a regular day in Iraq and Syria. Turkey is a neighbor to both of them and have relatives which died because of terror crimes. Without of minute of silence. That’s why. And they’re right. Its not against the victims, its about the hypocrisy.

The friendly match was the first time the two teams had met for eight years. It was watched together by Turkish Prime Minister, Ahmet Davutoglu, and Greek counterpart, Alexis Tsipras, as a sign of reconciliation between the two neighbouring countries with a troubled history.

The game was part of a spate of international friendlies around Europe, all of which observed a minute’s silence for the victims of the Paris attacks. After the game Turkish manager, Fatih Terim, criticised the fans, saying:

Our fans should have behaved during the national anthems and during the one minute silence.

The match was played a month after terrorist bombings in Ankara, Turkey’s capital. More than 100 people died on 10 October after two explosions targeted a peace rally outside Ankara’s main train station. In the wake of the attack the progressive HDP party blamed the deaths on President Erdoğan. It was the deadliest terror attack in Turkish history.