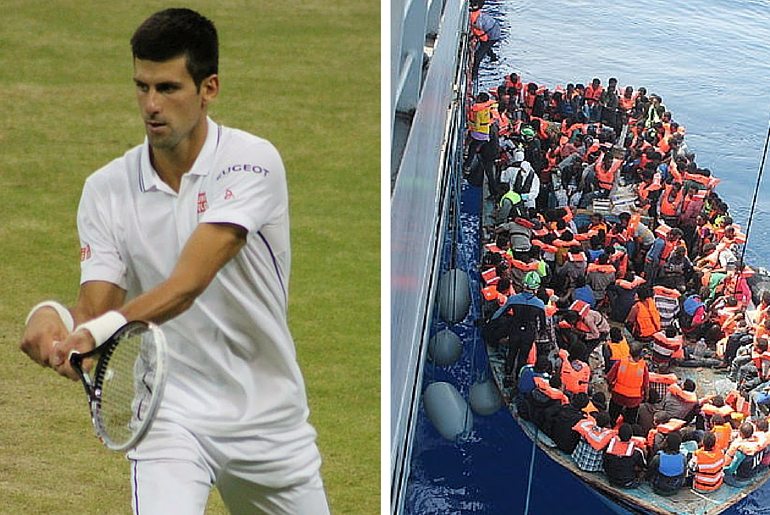 Novak Djokovic, the charismatic world number one men’s tennis player and Wimbledon champion, has responded to the refugee crisis with great compassion.

Djokovic, who is also a goodwill ambassador for UNICEF, speaking about the refugee crisis said:

You’ve got to get to the bottom of that, got to get to the cause. The cause is the war back in their country. And you can’t blame these people, if they don’t have a house, have nothing, where are they going to go? Of course, they have to search for some better place to live.

I think it’s an obligation of all the countries to give them this right.

From my perspective I’m only an athlete, obviously I’m following this as a human being. At the end of the day we all have to be humans and feel for one another. We have to put that in front of all the laws and borders and different political stuff.

His message of compassion is vital.

If we turn away refugees, we will be helping Isis. We must support people escaping tyrants and terrorists.

There is never a good time to be a refugee escaping a war-torn country. But things have got a whole lot worse since the Paris attacks on 13 November.

Leading the calls to close our borders is Tina Reeves. Ms Reeves has started a petition to “close the UK borders”. This is despite the fact that she is a woman that has worked in Spain for eight years and lives there for half of the year. Unfortunately, her petition has gathered pace with more than 430,000 people signing it.

Also, in a sickening cartoon, the Daily Mail portrayed refugees as soldiers coming into Europe alongside rats. This couldn’t be further from the truth. They are people escaping dictators and terrorists. But when even the prime minister declares refugees as a “swarm”, this suggests they are nothing but insects and parasites, and it isn’t hard to see where the Daily Mail get their vile views from.

This hostility and racism was shown earlier on this week by a beauty salon owner who banned all Muslims from her salon. April Major, the owner, was looking for revenge for the attacks in Paris and chose to hold all Muslims accountable. When she was criticised from people in social media, she said: “I hope your families get blown up by Isis”.

But this barrage of abuse, that refugees and Muslims have received from some quarters, has been countered. Nicolas Hénin, who was held hostage by the so-called Islamic State, had an important message. He said about Isis:

They will be heartened by every sign of overreaction, of division, of fear, of racism, of xenophobia; they will be drawn to any examples of ugliness on social media.

This message has also been reciprocated in the streets of Paris. Where a Muslim man put on a blindfold and had two signs next to him.  One said, “I’m Muslim, but I’m told that I’m a terrorist”, the second, “I trust you, do you trust me? If yes, hug me”.  The video shows an array of people hugging the man and many were in tears. The message is clear and powerful. It is wrong to tar every Muslim, or refugee for that matter, with the same brush. Isis is a group that represents a tiny minority of Muslims and their faith is very questionable.

For every intolerant reaction there is an act of compassion or solidarity like Djokovic’s. We must strive to increase the latter.