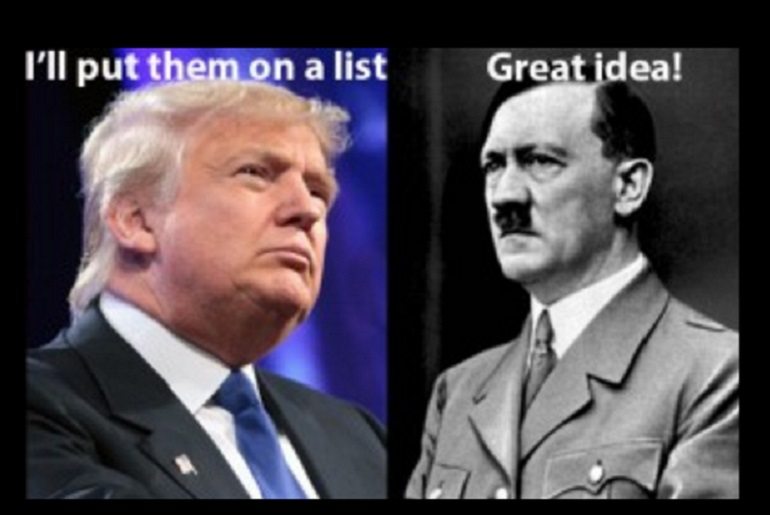 Donald Trump has caused controversy in Iowa this week over his assertion that he would ‘absolutely’ require Muslims be registered, should he win the US presidential election in 2016. When asked if he would be requiring all Muslims to register on a database, he replied:

I would certainly implement that. Absolutely.

You can watch a video of his statements here.

@mehdirhasan Trump @YahooNews tht if Pres he wouldn't rule out registering Muslims in a database or special ID 2wear pic.twitter.com/CYZzevrd32

Trump’s statement was a chilling reminder of the propaganda and vilification of Jews in Nazi Germany in the 1930s. Being made to wear badges to identify themselves and later being branded by numbers, are some of the most grotesque acts in human history, the precursor to the deaths of millions of innocent people. The Nazi register was part of the machine that vilified millions and framed them as different. Sub-human. With that ideology and the on-going mainstream Islamaphobia we are witnessing, we risk seeing history repeat itself.

Fortunately, Twitter was alive and well when the comments broke and people have been making the link between the beliefs of Donald Trump and Adolf Hitler.

First they came for the muslims… https://t.co/eLmNcyWFif – I feel sick. pic.twitter.com/wD6xW5O2uN

Perhaps the most poignant reminder of the mistakes of the past were reflected in this tweet:

Trump is, of course, no stranger to controversy. In the wake of the Paris attacks, he has already suggested that the US should shut down Mosques, claiming them to be a hot-bed of radicalisation. Saba Ahmed, President and founder of the Republican Muslim Coalition, braved two minutes of hate on Fox News, to remind the public that

Mosques are actually used for prayer. The actions of a few, claiming falsely to represent a religion, should not be used to vilify the many.

Trump, like many others, has made the assertion that terrorists are masquerading as Syrian refugees. The reality has been less accurate, with the Paris attackers being confirmed as European.

As a Sikh, I'm thankful to Jewish Americans for condemning Trump's plan to register Muslims in a national database pic.twitter.com/8gyKVFWWTL

The danger of letting our fears run unchecked is that innocent people become victims. People who are trying to evade persecution in their own homes and seeking sanctuary, now become targets of bigotry, mistrust and hatred – a tactic Hitler also used in his rise to power.

Didn't Hitler once do that to a religious minority? >> @nytimes: Trump Says He’d Require Muslims to Register https://t.co/eeDtoWc1vn

This thinking was wrong in the 1930s and is wrong today. The definition of terrorism is the use of violence, or intimidation, for political purposes. Trump, in all his gusto and many ludicrous statements, is exhibiting exactly the traits he so vehemently wishes his country to fight. The mainstream media, and government, are trying to manufacture our consent to justify the ill treatment of fellow human beings. It is up to us to show that this is unacceptable and that another world, of peaceful coexistence, is possible.