How to take down ISIS, from the comfort of your laptop - Canary 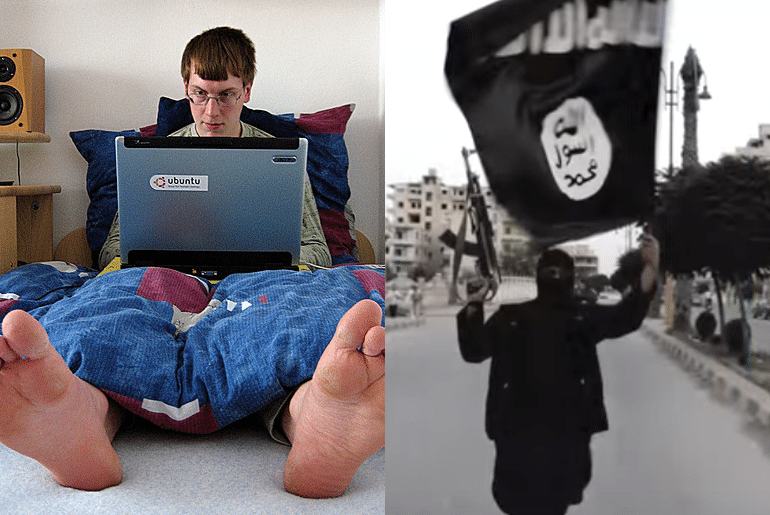 Online activist collective Anonymous has renewed its campaign against Isis (Daesh) with determination, reacting to the spate of terror attacks that have claimed lives around the world in Lebanon, Nigeria, Iraq, France and Syria.

#OpDaesh is a showdown straight out of a cyberpunk novel; using digital weapons, they target terror websites and social media accounts, either shutting them down or monitoring them closely for information that could lead to arrests. This year, affiliates of the hacking collective have foiled at least two terror attacks, in New York and Tunisia, by informing local authorities in time.

Anonymous responded to the recent attacks with at least 5,500 site and social media takedowns, successfully throwing a spanner in the works of the Daesh online propaganda machine which drives recruitment and funding. The operation has been going on for over a year now, throughout which time its effects have been incalculable. Currently, hosts such as Cloudflare and the encrypted service Telegram are under intense pressure to drop their Daesh-affiliated clients. In fact, Telegram has already dropped 78 channels from its servers.

How does crowdsourced counter-terrorism work then?

Actually, its very easy, and relies on simple actions that anyone with a basic level of computer skills can contribute to. At the most basic level of involvement you are invited to search for and report Daesh related websites and social media (there are instructions for setting Twitter bots to mine for key words). Once you think you’ve found something, you report it on this online form. From there it will go to affiliates within the Anonymous network, such as the Ghost Security Group which helps takes down sites and channels, and Ctrlsec which monitors potential plotters.

When a site or channel is a good target for a takedown, the details are released through one of the Anonymous channels. Then absolutely anyone is invited to bring down the propaganda in any way they can. This can involve simple reporting to the host, spamming the account with messages, hacking the password, or DDOS attacks which overload a server with millions of requests.

But there is criticism within the movement to the effect that some newcomers are ‘jumping on the bandwagon’, potentially running roughshod over more subtle and carefully-laid plans as a result of their over-enthusiasm. Anyone interested in joining #opdaesh, should make sure they read all available information first, and figure out how to approach it without undoing others’ hard work, putting lives at risk or breaking the law.

The Anonymous strategy represents a fundamentally different approach to Daesh than is taken by governments and security services, who see them as a military force holding ground in Syria and Iraq, or as congregating around networks of ‘radical’ Imams in the West. In the wake of the recent attacks, Western governments announced illiberal measures such as a banning of public gatherings and new surveillance powers.

New snooping laws will have no effect whatsoever for the simple reason that security services are already awash with information. Having more intel than they can deal with adequately led French police to overlook the Paris attackers, though they communicated by simple SMS messaging, which the police had access to all along. This is a ‘worst of all worlds’ situation, where nothing is private and no-one is safe.

It is very likely that Western governments will use their surveillance powers to hunt down not just violent sadists like Daesh, but also anyone who dares to question their actions. Whistleblowers like Edward Snowden and Julian Assange need to be constantly aware of what they are giving away through their online presence, and many legitimate protesters have already been jailed due to snooping.

However, we cannot expect total privacy all the time. For example, if we heard bangs and screams coming from our neighbours’ house, we should have a right to look through the window. If we suspected they were beating their kids or building a bomb, it would become our business. It’s much better for concerned cyber citizens to keep a friendly eye on each other than to let an oftentimes sinister and usually incompetent state mollify us with cynical talk of ‘security’ while in reality pushing for snooping powers that infiltrate every aspect of our lives.

Anon ops is an empowering venture and should be consider a significant development. A belief that words and ideas have the power to move the world – to harmony as well as hatred – is precisely what motivates us at The Canary. But the retaliation at the moment is a little one-sided. We need to recognise the role of the establishment media in fanning the flames of this conflict. If someone like Katie Hopkins talks about sinking boats full of refugees with gunboats, then it’s similar to an Al-Bagdhadi follower praising terrorist attacks. Neither are free speech. They are both hate speech. So we should look forward to #opdirtyracists as much as #opdaesh.

This whole venture brings something new, non-violent, and for once positive to a conflict that has been raging since before the invasion of Iraq and is as long as our history of colonial interference in the Middle East. You cannot simply bomb Daesh into oblivion at the cost of whatever innocent civilians might happen to be in the way. Not if you want change rather than continuation.

Not only do such indiscriminate and barbaric air strikes drive more of those caught in the middle towards Daesh, they do nothing to stem the flow of resources and manpower. It is the network of recruitment, propaganda, and finance that is the driving force – a network that everyone, through Anonymous, is perfectly poised to disrupt.