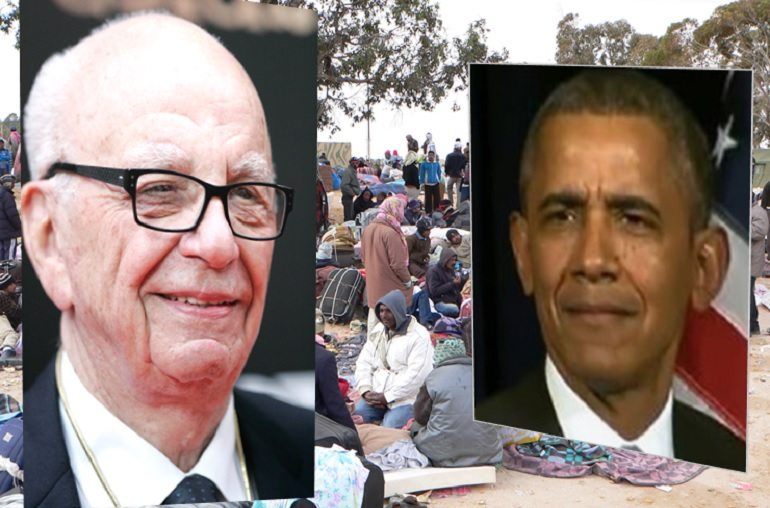 As the powerful CEO of News Corp and 21st Century Fox, Rupert Murdoch generally gets away with saying whatever he likes. And criticism of the clear political bias of his media outlets rarely gets as much acknowledgement as it deserves in the mainstream media. In light of his comment advocating a religious assessment of refugees to the USA, however, there should be a serious discussion about the role that figures like Murdoch play in the world.

How can we ‘prove’ a person’s religion? And what does the designation ‘Christian’ actually mean in a world where the peace-loving Martin Luther King Jr. and bigoted televangelist Pat Robertson could both be considered Christians?

Clearly, this tweet was not a reasoned policy suggestion, but it is part of a bigger picture of the mass media making generalisations about Muslims, but not about members of other religions.

The Sun, for example, has recently called on Muslims to denounce collectively the horrors perpetrated by Daesh (or ISIS) with a:

march through London in massive numbers with placards saying “not in our name”.

This action, the paper suggested, would be necessary in order to prove to the British people that they were in fact repulsed by Daesh and not secretly supporters of the group.

But have Christians ever been asked to apologise collectively for the many thousands of civilian deaths caused by the wars in Afghanistan and Iraq (launched by the self-proclaimed Christian George W. Bush)? And were they asked to march through the streets with ‘not in my name’ placards after Anders Breivik (who spoke about fighting for Europe’s “Christian cultural heritage”) murdered 77 civilians in Norway back in 2011 just to prove to other religious groups that they did not actually support his actions?

In 2014, over 120 Muslim scholars from around the world wrote an open letter to Daesh fighters and followers in which they denounced them as un-Islamic. The 18-page Arabic letter picked apart the Saudi-inspired Wahhabi ideology followed by the militants and used “heavy classical religious texts and classical religious scholars” to do so. In a summary of the letter, the authors even asked commentators to stop referring to the group as an ‘Islamic State’ because this term simply played into “the group’s unfounded logic that it is protecting Muslim lands from non-Muslims”. For Ahmed Bedier, president of United Voices of America:

For professor Reza Aslan at the University of California, Riverside, the media too often sought to tar all Muslim communities with a single brush by saying, “Well, in Saudi Arabia [women] can’t drive and so therefore that’s somehow representative of Islam”. Aslan agrees that this treatment of women was representative of Saudi Arabia (a country of 29 million people – not all of whom are happy with the official state ideology). However, he condemns the idea of generalising about all Muslims by stressing that what was true for Saudi Arabia (an extreme case) was not automatically true for the world’s Muslim community as a whole (which has around 1.6 billion adherents).

we’re using two or three examples to justify a generalisation. That’s actually the definition of bigotry… These kinds of oversimplifications, I think, only cause more danger.

The fact is, he says, the religion of Islam is like all other religions in the world in that it “depends on what you bring to it”. He then clarifies:

If you’re a violent person, your Islam, your Judaism, your Christianity, your Hinduism is going to be violent… People are violent or peaceful. And that depends on their politics, their social world, the way that they see their communities, the way they see themselves.

And Aslan is right. Daesh opposes the concept of multiculturalism in much the same way that nationalists or other religious extremists do. The way in which they believe there is only one correct way of living and that all other ways are wrong is not altogether different from the political extremist group Britain First, which has agreed on a policy to ban both Islam and the word racism.

Murdoch-style bigotry must be stopped

Roy Greenslade at The Guardian claims that anti-Muslim generalisations are “just the kind of response to terrorism that the terrorists seek to provoke”, because they increase tensions between different communities and heighten the chances of isolated and disenchanted Muslims becoming radicalised.

Western governments should not rely on generalisations about all Muslims (based on what a tiny handful have done) in order to justify turning away non-Christian refugees fleeing from state and non-state terror in the Middle East. The consequences – an increase in ignorance, hatred, and disunity – would be terrible.

For New America Foundation fellow Haroon Moghul, Western regimes simply need to accept that Daesh exists not because Islam does but because they themselves have made “terrible policy choices” in the Middle East over the course of the last century. To truly solve the Daesh-related crisis around the world, he insists that

Democracy must matter more than dictatorship.

And that means accepting that

Inclusive societies are the best long-term bulwark against sectarianism and extremism.

Fortunately, Rupert Murdoch is not the only voice in the media. Editor of The Buteman, Craig Borland, for example, reminded his readers very poignantly that refugees had

been through things we can’t begin to imagine.

And the following quote from Borland is a perfect final note to complete this discussion:

Surely as human beings we have a duty to help. But more than that, we have an opportunity to show them, and the world, that Bute is a wonderful place to call your home.

So let us show that Borland’s Bute is not the only community that is willing to open its arms to those who have escaped from war-torn nations in search of a brighter future. And let us encourage family members, friends, and neighbours to do the same, while boycotting all Murdoch publications to demonstrate exactly what we think of divisive and bigoted rhetoric.