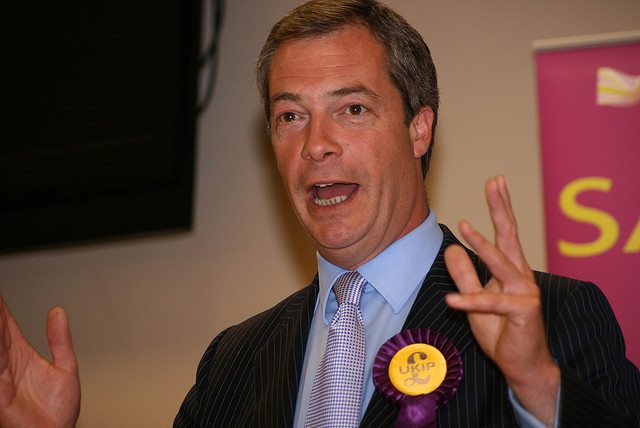 Nigel Farage, the leader of Ukip, has blamed the party’s defeat in Oldham West and Royton on people not speaking English and a “bent” election process.

Ever since he resigned as leader, and then unresigned, things have been tough for Farage. There was a split in the party straight after the election, then they ran out of money, and now Ukip has lost in a by-election that many thought they would win. The seat was seen as crucial for Jeremy Corbyn. Farge, as confident as ever, even joked:

I’ve got one slight worry, that if we win on Thursday and he goes as leader I’ll be devastated.

It hasn’t turned out the way Farge had hoped, the party doesn’t have its second MP and Farage blamed this on, you guessed it, immigrants. He has blamed bad traffic on immigration in the past and now he blames immigration for Ukip’s failure:

The seat has a diverse community. Around a quarter of the population are Asian, with many people of Pakistani and Bangladeshi origin. But to claim that 62.2% of people voted Labour because they can’t speak English is absurd, even for Farage.

He went on in his bitter rant to say:

There are some really quite big ethnic changes now in the way people are voting. They can’t speak English, they have never heard of Ukip or the Conservative party, they haven’t even heard of Jeremy Corbyn.

Not only is this insulting to the people of Oldham West and Royton, but it shows where Ukip stands. Also, what language does Labour campaign in? Why does Farage believe Labour has an advantage over Ukip?

Farage claimed that the result was “bent” after receiving information from an “impeccable source”. On Twitter he added:

As a veteran of over thirty by-elections I have never seen such a perverse result. Serious questions need to be asked.

He claims that there was a large amount of non-English speaking voters who voted by post which skewed the election in Labour’s favour. Allegedly, people came to polling booths with a bunch of postal votes, the vast majority voting for Labour.

Even if there was a drop of truth in what he is saying, it would have made no difference. Labour’s Jim McMahon won with a majority of over 10,000 while there were 7,115 postal votes cast.

Tom Watson, Labour’s deputy leader, argued that it was just “sour grapes”, he went on:

If he has evidence of criminal activities, he should report it to police. (But) if every single postal vote that he’s talking about was discounted, Labour would still have won

By-elections can be difficult for the party holding the seat, and turnouts are often low.

But to increase our share of the vote since the general election is a vote of confidence in our party.

It’s a clear demonstration that Labour is the party working people trust.

Labour’s resounding victory was a triumph for compassion, over a Ukip campaign of fear and division. After the Paris attacks, Ukip said Labour would bring “uncontrolled, mass immigration”, they would “axe” the armed forces and abolish the monarchy.

But none of that is true. Corbyn has taken a compassionate approach to immigration arguing that “we should let people into this country who are desperate to get somewhere safe to live”. The claim that he would “axe” the armed forces is an outright lie, all he ever said was it would be “wonderful” if countries didn’t need armies and we lived in a world of peace. Although, he is a republican, Corbyn could not have been clearer in saying that he does not plan on abolishing the monarchy.

It would appear Farage’s latest outburst is another attempt to cause division after a campaign that was based on fearmongering and outright lies. Or maybe he is just a bad loser.