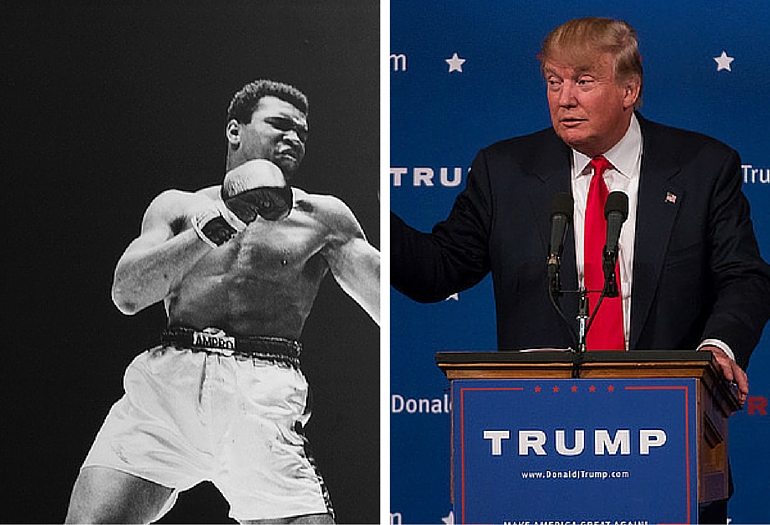 Donald Trump’s call for all Muslims to be banned from entering the US has received criticism from many quarters. Now, the greatest boxer of all time has stepped into the ring.

Trump called for “a total and complete shutdown of Muslims entering the United States” and, depressingly, he has been supported by some people. Noticeably, Rupert Murdoch questioned whether Trump had gone “too far”, but Murdoch has history: In January, he suggested all Muslims should take the blame for the “jihadist cancer” within Islam.

Another person who seeks to blame all Muslims for the actions of a tiny minority is Sarah Palin. The vice-presidential candidate for the Republicans in 2008 claimed banning all Muslims from the US was a “common sense plan”.

However, Trump’s bigoted response to the actions of a minority that claim to be Muslim has drawn criticism from a wide range of people.

Some authors have condemned him. J.K. Rowling has said:

Voldemort was nowhere near as bad

that anyone in America would even consider voting for this rabid coyote leaves me speechless.

The Facebook founder, Mark Zuckerberg, added his support to Muslims: 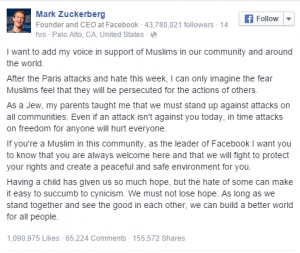 Trump’s call to ban Muslims from entering the US is an attack on democratic values and affront to common humanity.

While the mayor of London, Boris Johnson said:

The only reason I wouldn’t go to some parts of New York is the real risk of meeting Donald Trump.

Also, there is a petition to ban Trump from the UK, which has amassed over 400,000 signatures and should now be debated in the UK parliament.

But the greatest put-down has come from one of history’s finest sportsmen, Muhammad Ali, who converted to Islam in 1964. He released a statement addressed to “presidential candidates proposing to ban Muslim immigration to the United States”:

I am a Muslim and there is nothing Islamic about killing innocent people in Paris, San Bernardino, or anywhere else in the world. True Muslims know that the ruthless violence of so called Islamic jihadists goes against the very tenets of our religion.

We as Muslims have to stand up to those who use Islam to advance their own personal agenda. They have alienated many from learning about Islam. True Muslims know or should know that it goes against our religion to try and force Islam on anybody.

Speaking as someone who has never been accused of political correctness, I believe that our political leaders should use their position to bring understanding about the religion of Islam and clarify that these misguided murderers have perverted people’s views on what Islam really is.

Trump harbours some very dangerous views, but his outrageous comments have only managed to unite people against him. In contrast, Ali articulates the vital role political leaders have in ensuring sectarianism and racism have no place in society. Trump is definitely nowhere near ‘the greatest’.