Serena Williams crowned sportsperson of the year, then came the backlash - The Canary 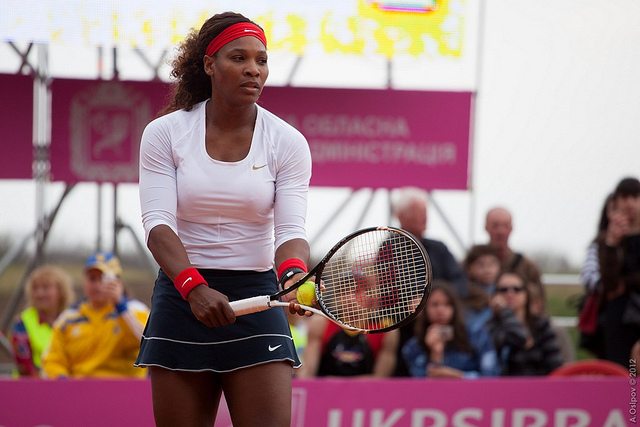 Serena Williams has been crowned by Sports Illustrated as their sportsperson of the year, but it has drawn typical scorn from some in society who would rather a racing horse won it instead, prompting the LA Times to run a poll.

Serena Williams or American Pharoah: Who's the real sportsperson of 2015? Vote in our poll https://t.co/l4A51SPUlP pic.twitter.com/dssxaGFbAn

Serena Williams has been the dominant force in tennis since winning her first major championship in 1999, and is arguably one of its greatest ever players; yet her success has been continually undermined by respected journalists, commentators, and the public on the basis of her cultural heritage, physique, and looks.

Women in general have struggled to gain parity with men in many areas of business and sport, but Serena’s apparent ‘fault’ is that she is not widely accepted by so-called experts in the game to be good-looking. Serena’s physical prowess has often been called too masculine or been attributed to the colour of her skin, as though her ethnic heritage somehow gave her a significant advantage over her opponents. In short, the dangerous allusion is that because Serena Williams is black, she was only ever destined to be an athlete.

These views underpin a widespread lack of respect for the 31 years that Serena has dedicated to her profession in pursuit of the mastery of her skills. In fact, with the mental toughness and dedication she has shown throughout her tennis career, she would likely have succeeded at anything she turned her hand to.

Serena Williams epitomises the dedication and commitment required to succeed that should transcend any issues of gender, skin colour, or illusions of race. We must drive home these qualities when talking to our children, regardless of their intention to play sports or pursue other avenues of interest in life.

The suggestion in some quarters that a racing horse is more deserving than Serena, meanwhile, says a lot more about our society than it does about Serena herself.

Examples of the abuse often levelled at Serena could be seen after the French Open in June, where tweets of varying vulgarity began to appear:

@serenawilliams is way more manly than ANY man in the #FrenchOpen It's absolutely disgusting. She's the original #CaitlynJenner

These comments are part of an underlying cultural problem within society, the media, and advertising. It is a problem built from discriminatory views and a superficial gender depiction which, in the case of sportswomen, considers that value should be measured by perceptions of beauty rather than the athletes’ highly tuned level of skill.

Sexism is rife, with Serena herself being asked to twirl after the Australian Open earlier this year – a request not usually requested of Roger Federer or Rafa Nadal. And in 2013, after one loss, the question was put to Serena that the absence of her father had somehow contributed to her loss, showing an ongoing, underlying theme of meaningless questions posed to successful women, whether it be at the press conference following a tournament, or on the red carpet at a movie premier.

In the course of Serena’s history-making journey (she is one grand slam away from equalling the great Steffi Graff’s haul of 22 in the open era), she has repeatedly risen up against both overt and covert racism and sexism directed towards women in a number of different sports. After her ordeal at Indian Wells in 2001, where she and her father were both verbally abused, Serena boycotted the event, only coming full circle by returning there for the first time in March this year, where she had this to say:

I was raised by my mom to love and forgive freely. Indian Wells was a pivotal moment of my story, and I am a part of the tournament’s story as well. Together we have a chance to write a different ­ending.

It is surely only a matter of when, not if, Serena Williams will overhaul the current record of Steffi Graff. And she will then stand alone as not only the greatest female tennis player to date, but perhaps the greatest tennis player of all time. She is doing her bit to write the different ending she spoke of above, but the rest is up to us. We must all seek to see beyond the divisive words and images of the media and focus instead on the talents and achievements of this once-in-a-lifetime athlete.