Why has the UK media declared war on anyone who doesn't want to launch one? - Canary 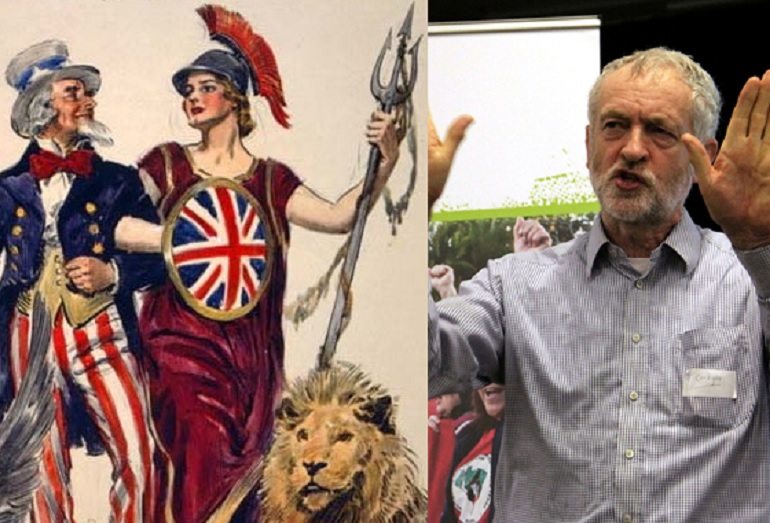 Ever since Jeremy Corbyn became a real challenger for the Labour party leadership earlier this year, his foreign policy positions have been the focus of attention in the mainstream media. Recently, his continued support for the Stop the War Coalition has come under particular scrutiny. But why are corporate media outlets so obsessed with delegitimising anti-war policies and activists?

Criticisms of the Stop the War Coalition

The Stop the War Coalition (StWC) was founded back in 2001 in response to George W. Bush’s call for a ‘war on terror’. It has since criticised “the British establishment’s disastrous addiction to war and its squandering of public resources on militarism”, seeking both to prevent and end wars waged by British forces in Afghanistan, Iraq, Libya, and now Syria.

In recent weeks, the StWC has come under criticism for three articles which sought to explain why the Paris attacks occurred, why air strikes in Syria were not an example of internationalism, and why ending the conflict between Israel and Palestine was key to bringing peace to the Middle East. While the arguments themselves were well reasoned, the phrasing used gave pro-war politicians and media outlets a precious chance to attack the organisation. As a result of the assault that followed, the StWC soon clarified its positions.

Pro-war Labour MPs like Caroline Flint and Tristram Hunt, however, urged Jeremy Corbyn to shun the group that he had chaired between 2011 and 2015. Corbyn’s response was to insist that the StWC was “one of the most important democratic campaigns of modern times” and that its critics were simply trying to shut down debate.

Meanwhile, the StWC claimed it had been subjected to “repeated attacks and witch hunts” because some of its supporters had shown:

the temerity to lobby their parliamentary representatives.

It said a “smear campaign” had been launched by both MPs and journalists in order to “discredit the antiwar cause and champion the fourth war on a Muslim country in fourteen years”.

Nonetheless, there are some genuine criticisms that could be aimed at the StWC.

For example, former StWC vice-president Caroline Lucas said she was “concerned that some Syrian voices were not given an opportunity to speak at a recent meeting organised by the StWC in parliament”.

Human rights campaigner Peter Tatchell has also argued that the StWC has “failed to organise or support protests against the Assad dictatorship”, and the crimes it has committed since 2011. Whilst opposing Western military intervention in Syria himself, Tatchell has previously called for peace activists to support the Kurdish-led democratic forces in Rojava, who have been waging an effective campaign of resistance against Daesh (Isis/Isil) despite being surrounded by hostile forces.

In other words, though the StWC stresses its opposition to “both terrorism and dictatorship”, activists like Tatchell and Lucas clearly believe the group could, and should, be fighting these specific societal ills more actively.

Since the parliamentary vote in favour of air strikes in Syria, a YouGov poll has shown that the vast majority of British citizens do not support the military escalation. According to writer John Wight, however, the British political establishment is so morally bankrupt that:

if Jeremy Corbyn had attended a Start the War rather than a Stop the War fundraising dinner recently, many of his critics would today be hailing him as a future prime minister.

In fact, StWC co-founder Tariq Ali thinks Corbyn has been the main focus of media attacks on the anti-war movement. He says:

In addition to the wars in the Middle East there is a nasty and unpleasant war being waged in England, targeting Jeremy Corbyn.

For journalist Yvonne Ridley, who was once imprisoned by the Taliban, this assault on peace campaigners may be rooted in the fact that “war-mongering politicians [are] running out of ammunition and, more seriously, time in office”. Why? Because the opposition of Corbyn and others to British military escalation in Syria can be backed up with both reason and evidence. For example:

There are clear steps that can be taken to defeat Daesh (as outlined here), but the current British government is simply not taking them. And it is fully aware of this. That is precisely why it has sought to delegitimise the forces in Britain that favour a comprehensive solution which aims to keep destruction and civilian deaths to an absolute minimum.

The truth is that the anti-war movement is not based on pie-in-the-sky dogmatism. Instead, it is based on evidence and reason – which both suggest that war cannot be stopped with yet more war. And whatever mistakes some activists may occasionally commit, we must remember that they are often a “voice of sanity” in situations of hatred and violence, as poet Michael Rosen illustrates in his response to StWC’s pro-war critics:

we haven’t killed anyone.
They’ve killed hundreds of thousands…
Perhaps they think that if they keep pointing
at us, saying,
‘Stop the War are the problem!’
no one will notice the blood
on their hands.