The left just won big in Spain, and Corbyn could do the same - Canary 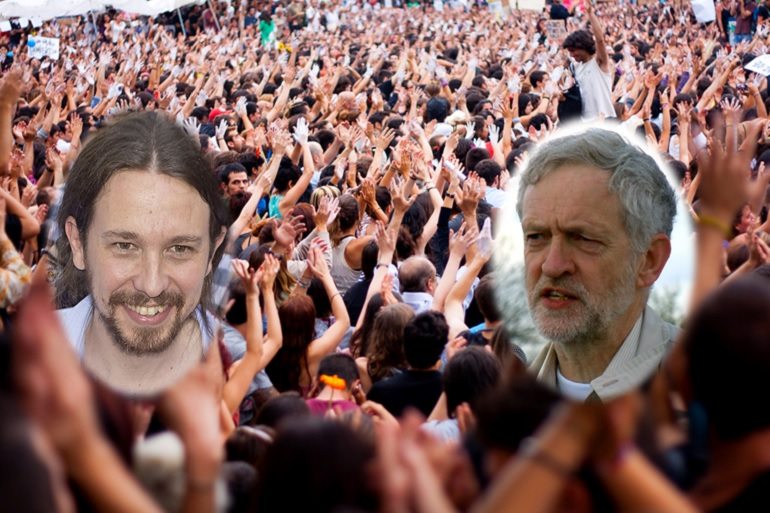 Austerity in Europe was dealt another serious blow in Spain’s parliamentary elections on 20 December. The results were messy and the left may have made some mistakes, but a significant section of the Spanish population has stated very clearly that they will no longer accept a political approach of ‘business as usual’.

The collapse of a two-party system

The real winners of the elections were Podemos – a new party of the left – and its local allies across the country. Technically, the two establishment parties gained more seats than Podemos, but with both the ruling PP (conservative) and the opposition PSOE (think New Labour) losing a significant amount of seats in the 350-seat Congress of Deputies, the idea of a two horse race has all but died. The establishment parties now have 123 and 90 seats respectively while Podemos, which opposes austerity, has 69.

Javier Moreno Zacarés at Novara Media stresses that the PP is “greatly overrepresented by the Spanish electoral system” because of an establishment bias which gives more power to traditional rural constituencies (which tend to vote for the PP). The PSOE, meanwhile, “has never recovered from the 2010 betrayal of its left-of-centre base, when it took a U-turn in social policy and introduced harsh austerity measures in the midst of the Eurocrisis”. As a result, it has focussed in recent years on the patronising strategy of “demanding the tactical vote of the left” much like New Labour in the UK. This has seen it haemorrhage votes to Podemos since 2014. And only the pro-rural electoral bias has allowed PSOE to gain disproportionately more seats than its left-wing competitor even though both gained around a twenty-per-cent share of votes in December’s elections.

The results, say Alan Clendenning and Harold Heckle at the Associated Press, are largely a consequence of voters being “weary of high unemployment, a seemingly endless string of official corruption cases and disgust over the country’s political status quo”. The success of Podemos, they insist, has come in a large part from portraying the two establishment parties as “out-of-touch behemoths run by politicians who care more about maintaining their own power than citizens’ needs”.

One reason the PP was not defeated outright, says Novara’s Kate Shea Baird, was because of the support of Spain’s over-65s – over half of whom have remained loyal to the party. However, as the government has shown clear sympathy with societal elites – for example bailing out the Spanish banks with €100bn (£73bn), – its power and popularity have been slowly chipped away in local elections by activists who have harnessed the power of the mass anti-austerity protests that have hit the streets since 2011.

The most likely coalition to be formed in the wake of December’s elections, suggests Moreno Zacarés, is one built from PSOE, Podemos, and “minor nationalist forces” from regions seeking greater autonomy from Madrid. But for this to happen, the PSOE must make a difficult choice-  sticking to its firm opposition to regional independence or conceding ground on the matter in order to return to government.

What is Podemos, and why has it been so successful?

According to TeleSur’s Belén Fernández, Podemos is currently “the only top electoral contender that shouldn’t immediately trigger the gag reflex of a reasonably principled, socially conscious person”.

Formed at the start of 2014 and led by a university lecturer called Pablo Iglesias (whose father and grandfather were both jailed under the dictatorship of Francisco Franco), Podemos is focussed primarily on traditional socialist aims like protecting public healthcare and education systems while supporting unemployed people and seeking to create a fairer society.

Iglesias thinks “everything is linked” in international politics. He therefore sees comparisons between himself and Jeremy Corbyn as a result of the fact that both seek “the democratisation of the economy” and oppose “the totalitarianism of the market”. For him:

the most important thing isn’t who is bringing the ideas, but the actual ideas.

The best way to achieve success in the current political system, Iglesias asserts, is to establish “a connection between the reality you have diagnosed and what the majority actually feels”. And this is why he sees Podemos as the main political expression of the 15-M movement, a street mobilisation which saw city squares across Spain occupied for weeks in mid-2011. According to Occupy.com, around 8.5 million Spaniards participated in this movement.

The 15M movement inspired a number of citizen initiatives to fight for direct democracy rather than the representative democracy existent in most Western-style systems, favouring what Occupy.com calls a “consensus decision-making model”. Some of these groups now criticise Podemos for watering down its projects and being “absent from the streets and assemblies”.

For 15M activist and Podemos member Francisco Jurado, the party’s leaders “have a background that is more related to how political parties think than the dynamics of social movements”. And because of the focus on leaders, which are “more compatible with the media format” of politics than movements are, Podemos is forced to “suffer the fate of its leaders”. In other words, although Iglesias is a popular figure at the moment, this may not last. Therefore, Podemos needs to focus more on doing politics differently by giving more power to citizens, activists, and unions.

Nonetheless, Podemos and its allies have a pretty good record to date. Since May 2015, so-called citizen platforms have governed in big cities like Madrid and Barcelona, reducing the salaries of political figures, increasing the transparency of public institutions, and prioritising social spending. And these successes are partially the result of a symbiotic relationship that exists between these platforms and Podemos. The former, for example, has placed its trust in Iglesias in exchange for local decision-making and significant autonomy. This is perhaps one reason why Podemos now recognises Catalonia’s right to self-determination, suggests Kate Shea Baird.

Podemos as part of a bigger transformation

As sociologist Carlos Delclós says, the emergence of Podemos is “just one aspect of a more profound, cultural change” in Spain. But it is a necessary part of this transformation, he implies, because it has shown an ability to “complement its young, college-educated base with substantial support from working class, underprivileged and older groups” through the use of well-oiled TV and media campaigns. While many 15-M activists had time, confidence, and a good knowledge of radical politics, he says, Podemos managed to attract the support needed to gain institutional power.

Podemos is not the representative of the 15-M movement, Delclós insists, but it has helped to further a part of its progressive agenda. By using what they have learned from social networks and movements effectively, he says, the party’s leaders have refined a common narrative that they have then taken “to the public arena in order to maximise its impact” in the country’s “bars, cafés and unemployment lines”.

In addition to its achievements to date, however, Podemos and its allies will need to work hard over the coming months and years to prove they truly are the voice of the exploited and disenchanted Spaniards who took to the streets in 2011. They must also demonstrate that they have a real interest in empowering ordinary citizens rather than just representing them in congress.

Finally, Spain’s government is going to be divided for the foreseeable future and even if Podemos gets into government, Delclós asserts, “SYRIZA’s experience reminds us that exercising power at the level of the state has many pitfalls”. At best, Podemos will “break down some of the existing institutional barriers to social justice and democratic praxis”, but real profound change will come from the continued political mobilisation of ordinary citizens.

As Pablo Iglesias’ own speechwriter Jorge Moruno has insisted, the task for Podemos and its allies is to convince citizens to get involved in politics, or:

To expand narratives and practices to include the part of the population that is still missing… People who think politics is something politicians do.

Back in Britain, Jeremy Corbyn and others on the left can and must learn from the strategies that have helped Podemos grow, and they must also learn from the party’s mistakes. But most importantly, we must all see December’s elections in Spain for what they are: yet another step forward towards greater political and economic democratisation in Europe.