Cameron floods the Commons with BULLSH*T - The Canary 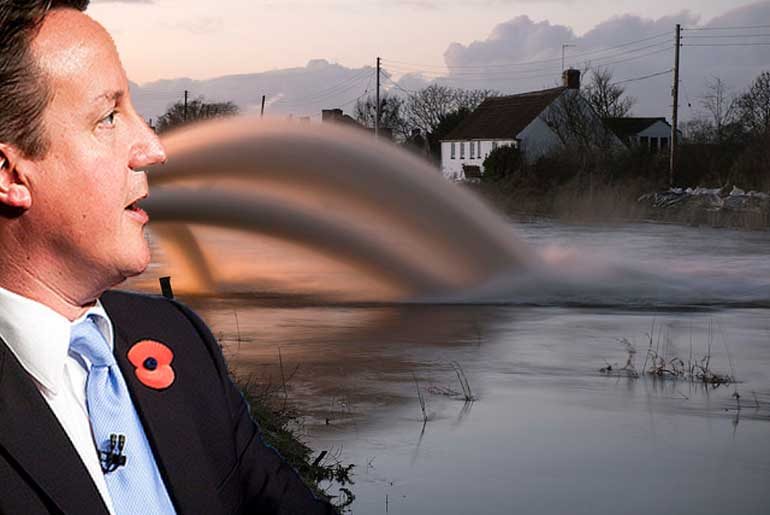 The scene at the House of Commons was utterly disgraceful on 6 January, with the Prime Minister making a complete mockery of the responsibilities of government. Instead of directly answering important questions about the abject failure of our flood defences, Cameron preferred to make lame jokes about Corbyn’s cabinet reshuffle, showing off his knowledge of Shakespeare plays with pre-prepared lines that had nothing to do with the questions asked.

Even the Sun was disgusted:

Though he claimed at one point to have spent a “record” amount on flood defences, the reality is that he slashed it extensively.

In 2008 the Pitt Review warned of disastrous consequences if consistent action was not taken. Under Labour, the necessary work was underway from then on, but the Tories cut it back shortly after coming to power in 2010.

Now, in the wake of the December floods, Cameron has refused to acknowledge the role his party and its austerity policies have played in the damage, and instead resorted to pointless parlour tricks.

While this scripted stand-up routine may have impressed the odious Tory backbenchers, who cackled merrily at the jibes, it will come as a complete smack in the face to the tens of thousands of people whose homes have been wrecked by the floods, the 7500 who were without power this Christmas and those who lost family members in the torrents.

If you've been flooded and you'd turned on #PMQs now I imagine you'd be furious at behaviour on Tory benches.

In the Commons, the Prime Minister stood up in front of the house, and the entire country, and said that his party had increased spending on flood defences. The hole in that argument is as gaping as this one:

The spike was the Tories’ response to the winter floods of 2013/2014, money thrown at the problem briefly to score political points, but ultimately piecemeal and inadequate.

You don’t prevent a disaster after it has happened. What the hell do they teach them at Eton?

The cost of cuts – this is what austerity looks like

Not only have people had their lives and homes ruined, some have actually died in the flooding. Others find their lives disrupted, their businesses destroyed.

The monetary costs of this winter’s flooding may be more than £5bn and many are facing financial ruin as a result. But the ‘savings’ made by Tory cuts to flood defences since 2010 are estimated to only total £1bn by 2020, and we’ve already suffered many other costly floods. Anyone can see that the costs of insuring against disaster will almost always be less than the costs of the disaster itself. It’s just common sense.

We need long-term, consistent flood defences as set out in the Pitt Review. Not short term posturing.

2015 broke all records; it has been the hottest year since records began. December was the wettest experienced in the UK in living memory. We are witnessing the effects of an extreme weather event that originated in the South Pacific and blasts warm, wet, turbulent weather to the north. It has hit the UK with storms Desmond and Eva and Frank, bringing warm air to the Arctic Circle and taking the temperature to above melting point.

There is growing evidence that the severity and frequency of these weather events is worsened by the warming of the earth, though there is by no means a scientific consensus, as yet.

What is almost universally agreed, however, is that global climate change is happening and is driven by human activity. At the Paris climate summit, 196 nations around the globe agreed on the reality of climate change and the need to keep levels below a 1.5C increase from pre-industrial levels.

It’s a reality and we have to deal with it.

Yet the Tories have done nothing but stand in the way of environmental progress, slashing subsidies to the renewable energy sector, risking killing off this thriving industry. Scientists warn only of more extreme weather to come, and yet the government has only faltering plans to either reverse the trend or contain the damage.

How to clean up this mess

We need to kick them out.

They are taking our money and doling it out as tax-breaks for the super-rich, while neglecting every Plan B, public service and safety net we have. The economy is a house of cards, both private and public debt have increased, and demoralised junior doctors have been pushed so far that they may go on strike.

This is a terrible, irresponsible, incompetent way to run a country.

It is gaffes like these that are really going to wreck the Conservatives’ electoral chances in 2020. Nobody can tolerate this arrogance for too much longer. People may forget a lot of things, but they will not forget the time their homes got flooded and the party in government spread lies and made terrible jokes, at their expense.