If Jeremy Hunt made you angry this week, this will make you laugh - Canary 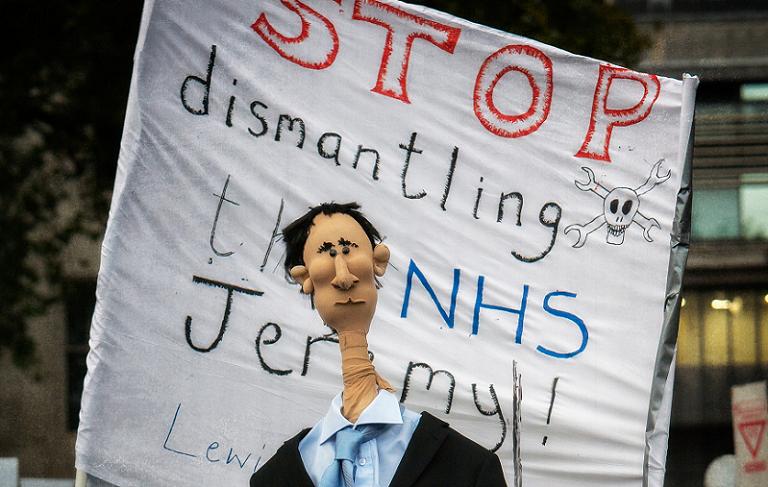 The ‘calculating’ arch-villain of the week in British politics has now been caught mis-calculating.

Health secretary Jeremy Hunt has been criticised for his claims that patients taken into an NHS hospital on weekends are more likely to die than those taken into hospital on weekdays, supposedly due to lower-quality care. Hunt reiterated the claim on Tuesday in response to the junior doctors’ strike, even though it has been debunked various times before.

Specifically, Hunt claimed that stroke sufferers taken into hospital on weekends are 20% more likely to die. But professor David Curtis of University College London has analysed the published findings from PLOS One, on which Hunt’s claims were based, and has revealed a very different story.

Mortality was increased for admissions at weekends, when compared with normal week days, but may be influenced by a higher stroke severity threshold for admission on weekends. Other than for unspecified strokes, we found no significant variation in the weekend effect for hospital size, season and distance from hospital.

Curtis told the Daily Mirror on Wednesday that these findings are misleading because they overlook the severity of the condition of patients. Those patients whose conditions are most severe are always taken into hospital, irrespective of the day, whereas victims who have suffered milder strokes are far more likely to be admitted only on weekdays.

In other words, the reason patients admitted on weekends are likelier to die is because their condition is often more severe, not because of poorer quality care.

Professor Curtis, who has penned over a hundred reports on medical statistics, also drew attention to a little-discussed detail from the report – the rates of admission for stroke. On weekdays, the rate is 111 per 100,000. On weekends, the rate is only 88 per 100,000.

Hunt did offer a rebuttal (over Twitter) in which he simply reiterated what was in the PLOS One report. He largely ignored the more accurate angle presented by Curtis. This leaves us to wonder if he even understood the calculations used to arrive at the corrected numbers.

It is already worrying enough that Jeremy Hunt is health secretary when he so clearly knows nothing about medicine, but we now have another reason for concern. Hunt is embarrassingly bad at maths, too. But this appears to be an epidemic in the Tory cabinet, so he’s in fine company. Remember George Osborne – the man whose main job is to count and distribute public money – being unable to perform his eight-times table? It seems fitting, in this light, that the ‘innumeracy disease’ has been passed on to the man whose job is to head up the nation’s efforts to stamp out disease.

But that does not stop it being frightening. Ministers like Osborne and Hunt being assigned to departments as major as the exchequer and health is the clinching evidence that this government regards competence to be irrelevant. Instead, the only qualification required appears to be a form of fervent, ideological tunnel vision.

If you share the widespread concerns about the future of the NHS under this government, here are a few things you can do to help: