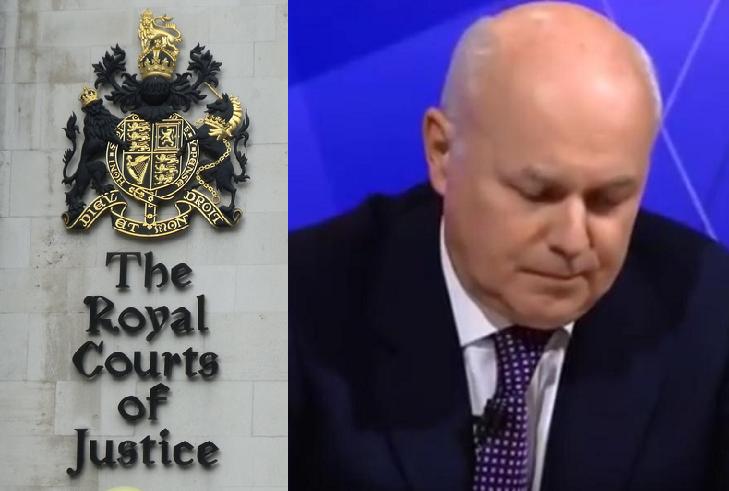 On Wednesday, the government fell to yet another defeat in the courts over its welfare policies, namely the ‘bedroom tax’, and their response has been predictably petty.

The current Tory government and the preceding coalition one have frequently been found to be breaking the law. The reasons have been their extremist policies on welfare and anti-terrorism. This time, the Spare Bedroom Under-Occupancy penalty, also known as ‘the bedroom tax’, is the legal transgression.

Specifically, two families who have been affected by the penalty challenged its imposition. One of the cases was originally heard in the High Court in 2014, and dismissed. Both cases have now been reviewed in the Court Of Appeal, which upheld the complaints.

One of the challengers was the family of a 15-year-old boy from Pembrokeshire who requires constant overnight care. Their name is the Rutherfords.

The other challenger was a woman, identity withheld, who had been the victim of serious domestic violence.

The position of both challengers was that they were discriminated against by the imposition of the ‘bedroom tax’, as, to quote the official ruling (pdf),

it does not include them within a defined class of persons whose position has to be taken into account for the purposes of the reduction in Housing Benefit. They contend that their omission is unlawful discrimination under Article 14 of the European Convention on Human Rights (ECHR)… both these cases have proceeded on the accepted basis that Regulation B13 constitutes prima facie discrimination on grounds of sex and disability.

The spare room in the Rutherfords’ home was penalised even though it is frequently used by carers who look after the child overnight.

In the other, even more disturbing case, the woman had been in a brutally violent relationship, in which she had been beaten, stalked and raped. Again to quote the ruling:

[The woman] has lived in a three bedroom house rented from the local council since 1989. In 1993-4 she had a brief, casual relationship with a man, X, who was subsequently convicted of attempted murder; he has been exceptionally violent to her. Whilst in prison he started to harass her and in 2002 he sought her out. A child was conceived as a result of his rape of her and was born in 2003. The child lives with her. The courts have refused contact between the son and X.

To give the woman a vital line-of-defence against ‘X’ continuing to torment her, one of the rooms in her house was modified to serve as a ‘panic room’ that she and her son could hide in. This room was penalised for being a ‘spare bedroom’, which it most certainly is not, eventually reducing the woman’s housing benefit by 14%. Such a penalty is, in effect, a tax on being the victim of domestic violence.

It should be emphasised that discretionary housing payments (DHPs) are available as a supplement at the discretion of local authorities. So the ‘bedroom tax’ system is not entirely without a safety net, and the woman in question had received DHPs after the penalty was imposed. But because the judgements on whether or not a DHP should be paid, and how much in each case, are somewhat arbitrary and at the mercy of funding limitations, the safety net is not a reliable one. DHPs, moreover, usually expire after just six months (pdf).

Secretary of State [Iain Duncan-Smith] did not address how the distinction could be justified by reference to the best interests of a child as a primary consideration. He justified the distinction between making provision for a bedroom for disabled children but not for disabled adults by reference to the best interests of the child and explained the different treatment on that basis. On that basis, it seems to us very difficult to justify the treatment within the same regulation of carers for disabled children and disabled adults, where precisely the opposite result is achieved…

The admitted discrimination in each case caused by Regulation B13 has not been justified by the Secretary of State.

In other words, the Department of Work & Pensions argued that the carers of disabled children are adults, therefore their accommodation is not exempt from the ‘bedroom tax’. The judges in the Court Of Appeal begged to differ. If, as Duncan-Smith claimed, the best interests of the child are the primary consideration, having the carer available overnight without penalty or sanction should go without saying.

The response of the Government to the ruling has been predictably stubborn and petty. Ministers immediately insisted they would lodge an appeal with the Supreme Court. The DWP quickly reiterated the point about DHPs, but with no explanation why DHPs should be necessary instead of simply allowing obviously-needed exemptions. It said:

we are giving local authorities over £870m in extra funding over the next five years to help ensure people in difficult situations like these don’t lose out.

I am grateful to the DWP for saying this. It gives me an opportunity to drop a useful hint to people trying to interpret ‘political-speak’. When a government spokesperson quotes an impressive-sounding figure, pay close attention to the timescale. £870 million sounds impressive, but most rent is paid monthly, not five-yearly. Twelve months per year across five years means 60 months. Divide 870 million by 60 and you get £14.5 million per month. The DWP’s own report concluded that well over half a million households were affected by the ‘bedroom tax’ in 2014. So, even acknowledging that not everyone will require DHPs, that is not a huge fund on which to draw. The danger is that when the funds run low, requests for DHPs will be rejected for harsher and harsher reasons.

The issue was also addressed – sort of – at Prime Minister’s Questions on Wednesday. There were the usual, numbingly insensitive hoots of laughter from Tory backbenchers of course. Meanwhile, David Cameron, typically, did not really answer the question Jeremy Corbyn put to him. Instead, he just resorted to the familiar Tory side-step of reasserting the general when the question is about the particular.

This morning the Court of Appeal ruled that the bedroom tax is discriminatory, because of its impact—…

This was the moment for the usual fits of privileged Tory laughter at the thought of poor people having to pay money they do not possess.

I don’t know why Members opposite find this funny, because it isn’t for those who have to pay it. The ruling was made because of the bedroom tax’s impact on vulnerable individuals, including victims of domestic violence and disabled children. Will the Prime Minister now read the judgment and finally abandon this cruel and unjust policy, which has now been ruled to be illegal?

We always look very carefully at the judgments on these occasions

That, of course, was not what Corbyn had asked. Cameron immediately shifted from the particular to the general by restating the very well known pretext for introducing the penalty in the first place.

but of course our fundamental position is that it is unfair to subsidise spare rooms in the social sector if we do not subsidise them in the private sector where people are paying housing benefit.

Perhaps Mr Cameron could have suggested introducing subsidies to the private sector instead, or at least offered a clear explanation for not doing so. But no.

It seems that, no matter how often Conservative policies fall foul of the law, the people running the party will simply never accept that they are wrong. Instead, it is always the courts that are at fault. They may be run by people who have worked within the law for decades, but apparently they never know as well as the Tories do.

If you want to see the hated ‘bedroom tax’ repealed, here are a few ways you can help:

– Volunteer to help the Unite The Union campaign against the tax.
– Lend support to UCATT.
– Contact your local MP to pressurise them to speak out against the tax in Parliament.

Featured image via Elliott Brown/Flickr, and screengrab from ‘latentexistence’ video on YouTube